US delegation in Ireland pushes for negotiation on Northern Ireland Protocol

Nine members of US Congress are in Ireland this week reaffirming the US commitment to the Good Friday Agreement amidst concerns about Brexit's Northern Ireland Protocol. 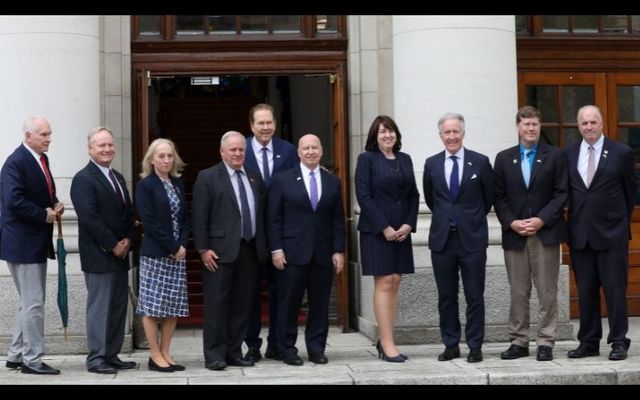 May 23, 2022: US Ambassador to Ireland Claire Cronin (fourth from right) in Dublin, Ireland with the US Congressional delegation led by Representative Richard Neal (third from right). RollingNews.ie

US Congressman Richard Neal, the head of the Ways and Means Committee as well as co-chair of the Friends of Ireland Caucus in Congress, is leading the bipartisan congressional delegation that arrived in Ireland yesterday, May 22, after engagements in Brussels and London.

The American delegation arrives in Ireland amidst growing concern about the Northern Ireland Protocol, a key piece of Brexit legislation that the British government said last week they will be making changes to despite warnings from Ireland, the wider EU, and the US.

On Sunday, the US delegation was on the Blasket Islands off the coast of Co Kerry for what Congressman Neal described as a “very special day.”

A very special day on the Blasket Island yesterday. So many of my constituents left this place and emigrated to "the next parish over" - Springfield. https://t.co/PvkeNIZZDm

Congressman Neal told RTÉ on Sunday: “President Biden, Speaker Pelosi, and I have made our position known. Nothing can jeopardize the Good Friday Agreement or any sort of a return to hard border.

“It should be a template for the world coming up on the 25th anniversary [of the Good Friday Agreement]. It should be celebrated widely, not just on this island, but across the world.”

Neal was speaking in the wake of his meeting with UK Foreign Secretary Liz Truss in London on Saturday. Last week, Truss announced that the British government is preparing changes to the Northern Ireland Protocol, which was agreed upon in 2019 as part of the Brexit agreement.

Great welcoming @RepRichardNeal @WaysMeansCmte with members of US Congress today ????

We discussed our cast-iron commitment to the Belfast (Good Friday) Agreement, the importance of free trade and our condemnation of Russia’s illegal invasion of Ukraine. pic.twitter.com/2hSPgqnIYA

On Monday, before the delegation made its way to Dublin, Congressman Dan Kildee told RTÉ Morning Ireland: "It's important, and we stress this, that the (UK Government) negotiate and that they not take unilateral action.

"That was a very firm point that was pressed by our delegation, most particularly Richie Neal."

He continued: "The only way we can come to agreement, the only way we protect the incredible progress that's represented with the Good Friday Agreement, is face-to-face negotiation.

"It is disappointing to see unilateral action being considered. We stress that that is not the approach that we recommend."

In Dublin, the US delegation had engagements with US Ambassador to Ireland Claire Cronin, Taoiseach Micheál Martin, as well as TD Mary Lou McDonald, president of Sinn Féin.

Ambassador Cronin said that the American visit "underscores the US commitment to protecting the gains made in the Good Friday Agreement."

This morning I welcomed the Congressional delegation led by @RepRichardNeal to @usembassyDublin. This important visit underscores the U.S. commitment to protecting the gains made in the Good Friday Agreement. pic.twitter.com/hERyGipLch

The Taoiseach echoed US sentiments, saying that "negotiation, not unilateral action" is the way forward.

Really good meeting with @RepRichardNeal and his Congressional colleagues at Government Buildings today.

Deep understanding of need to protect the GFA, and to resolve issues around the Protocol.

Speaking after her meeting with the delegation at Leinster House, McDonald said: “I thanked the members of the US Congress for their continued support of the Good Friday Agreement, for peace and for progress in Ireland.

“There would be no Agreement without the US. The progress we have made since 1998 has been due to the diligence and commitment of US political leaders who have acted as guarantors of our agreements."

She added: “We all agree the way forward is clear - the DUP need to get back to work and stop blocking the formation of an Executive."

The USA stands resolute in defence of the Good Friday Agreement and the protocol. It is imperative that the Executive is formed. No delay. The people have spoken. Very good meeting with the Congressional Delegation lead by @RepRichardNeal pic.twitter.com/JamV5rQSAB

The US delegation continues to push for negation as the Democratic Unionist Party (DUP), which emerged as the second-largest party behind Sinn Féin after Northern Ireland's elections on May 5, refuses to enter power-sharing at Stormont as a matter of protest against the Protocol.

The DUP is critical of US interference on the matter, with one MLA, Phillip Brett, stating on Monday that the American delegation "should spend less time with the Friends of Sinn Féin chasing Irish American votes and more time listening to genuine views in Northern Ireland.”

The US delegation is also set to meet with President of Ireland Michael D. Higgins while in Ireland. Congressman Neal is set to address the Seanad tomorrow, May 24 before the delegation travels on to Northern Ireland.