US Speaker of the House Nancy Pelosi said: “It is deeply concerning that the United Kingdom is now seeking to unilaterally discard the Northern Ireland Protocol." 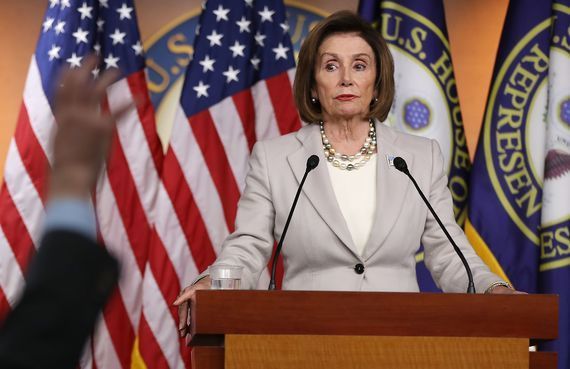 US Speaker of the House Nancy Pelosi has warned the UK Government that there will be no US-UK trade deal if the Good Friday Agreement was damaged by unilateral changes to the Northern Ireland Protocol.

Pelosi said in a statement on Thursday: “The Good Friday Accords are the bedrock of peace in Northern Ireland and a beacon of hope for the entire world. Ensuring there remains no physical border between the Irish Republic and Northern Ireland is absolutely necessary for upholding this landmark agreement, which has transformed Northern Ireland.

“It is deeply concerning that the United Kingdom is now seeking to unilaterally discard the Northern Ireland Protocol.  Negotiated agreements like the Protocol preserve the important progress and stability forged by the Good Friday Accords, which continue to enjoy strong bipartisan and bicameral support in the United States Congress.

"As I have stated in my conversations with the Prime Minister, the Foreign Secretary, and Members of the House of Commons, if the United Kingdom chooses to undermine the Good Friday Accords, the Congress cannot and will not support a bilateral free trade agreement with the United Kingdom.

“Respectful of the will of the British people and of Brexit, I urge constructive, collaborative, and good-faith negotiations to implement an agreement that upholds peace.

"The children of Northern Ireland, who have never known the bloody conflict and do not want to go back, deserve a future free of the violence where all may reach their fulfillment.”

Colum Eastwood, head of the SDLP in Northern Ireland, quote tweeted Pelosi's statement and said, "Are you listening, Boris Johnson?"

Are you listening, @BorisJohnson? https://t.co/oRpAqJ38NL

Pelosi's comments come after UK Foreign Secretary Liz Truss announced on Monday that the UK would be pushing ahead with changes to the Northern Ireland Protocol despite warnings from Ireland, the wider EU, and the US. The UK Government will override parts of the Protocol unless it can reach a compromise with the EU in the coming weeks.

Unionists have raised concerns about the Protocol, claiming that it threatens Northern Ireland's position in the UK by creating a de facto trade border down the Irish Sea.

Taoiseach Micheál Martin traveled to Northern Ireland on Friday to meet with politicians and business leaders in an effort to break the Stormont impasse over the Protocol.

The Taoiseach told BBC Radio Ulster that "professional, serious negotiations" between the EU and the UK were the "only way" to break the current impasse.

Martin said the UK Government had "moved too far in a unilateral way" on certain issues, including the Northern Ireland Protocol and amnesty for Troubles-era killings.

"In my view that is not fully in accordance with the spirit of the Good Friday Agreement which involves collaboration, working together," Martin said.

He also criticized the DUP for not going into government following Northern Ireland's elections earlier in May, arguing that in a democracy, parliament should convene after voters elected a government.

WATCH: Day one of the Ireland Today 2022 virtual conference