A street corner in New York City has been conamed Jimmy Neary Way in honor of the late Irish man Jimmy Neary, whose Manhattan restaurant became "a bastion of Irish culture." 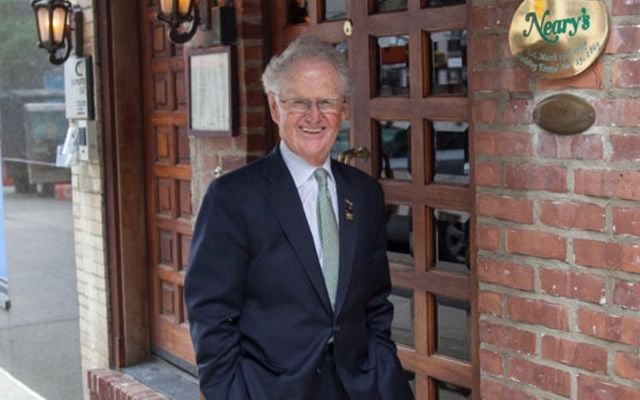 The late Jimmy Neary outside his legendary restaurant in New York City. Neary's

James ‘Jimmy’ Neary, a native of Co Sligo who ran Neary’s restaurant in Manhattan for some 50 years before his death in 2021, was honored in New York City on September 14, what would have been the popular Irish man’s 92nd birthday.

'Jimmy Neary Way,' at the intersection of 57th Street and 1st Avenue, not far from Neary's, was unveiled at a conaming ceremony on Wednesday afternoon.

The event honoring Neary was attended by more than 100 people and featured remarks from former Mayor of New York City Michael Bloomberg and co-anchor of NBC News’ Today Hoda Kotb.

An Irish New Yorker beloved by his loyal customers and staff, Jimmy Neary's smile always brighten your day as you enter Neary’s Restaurant. Great food, company & stories were his trademark. Jimmy was as iconic as the city he loved — and that now bears a street named in his honor. pic.twitter.com/DKnvWmL4Mt

Jimmy was an Irish 🇮🇪immigrant and #smallbiz owner who made quite an impression on all guests. His restaurant has served as a significant meeting place, home of great conversations and celebrations, a neighborhood landmark and a bastion of Irish culture and pride. pic.twitter.com/3RKvqVk8ZR

City officials credit Neary with “creating a space that was a bastion of Irish culture and a landmark for celebration of Irish history and pride."

While he created an establishment with some of the most politically and culturally significant history in New York City, Neary was also a significant figure in his own right, city officials said. Timothy Mara, co-owner of the NY Giants, gave Neary his two Superbowl rings and famed fiction-writer, Mary Higgins Clark, included Neary in many of her novels. Every year, Mayor Mike Bloomberg hosted iconic New Year’s Eve celebrations at Neary's restaurant and he was even accompanied by Neary in Ireland when the Mayor was asked to dedicate a monument to General Michael Corcoran, who led the Fighting 69th Regiment during the American Civil War and who also hailed from Co Sligo.

Speaking at Wednesday’s event, Una Neary said: “Everyone that walked through the front doors of Neary’s looked forward to being greeted by the warmth, charm and big smile of our father. I am truly honored to be carrying on his great legacy on his favorite street (“Jimmy Neary Way”) in his favorite city (New York).”

Council Member Menin said on Wednesday: “I’m honored to be able to hold this ceremony for an upstanding citizen of our community.

"Jimmy had an unbelievable impact on a copious amount of people. Starting a small business and having it be so successful that it becomes a landmark of Irish culture and pride is no small feat. Jimmy truly achieved the American dream and I hope the establishment that he loves continues to prosper under his daughter Una’s leadership.”

Timothy Michael Cardinal Dolan said: “The Irish are perhaps best known for their wit, a strong sense of community, a love of family and friends, and, perhaps most of all, a deep and abiding faith. All of these qualities were personified by my good friend, Jimmy Neary. A proud son of Sligo, Jimmy and his legendary restaurant welcomed guests for more than five decades, and once you entered Neary’s door on East 57th Street, you felt instantly at home. I’ve little doubt that he and his beloved Eileen are, even now, warmly welcoming newcomers to their new place in Heaven.”