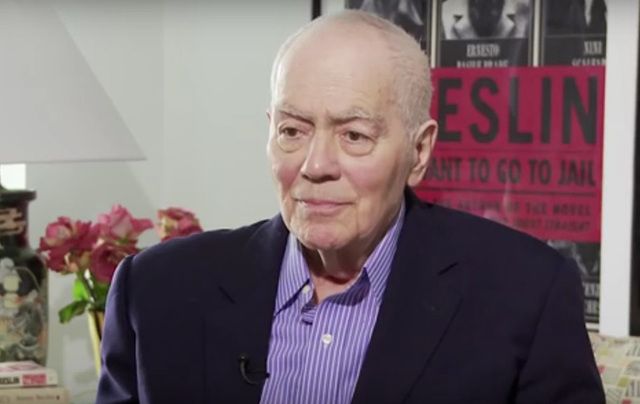 But Breslin was more than a talented writer. He was a gadfly, a politician, a performer. He proudly carried a New York Irish swagger as he defended his city against all comers. And it was never just New York to Breslin, it was always “The City of New York.”

He could be hilarious one minute and prickly the next. But no one can deny that in his prime he was the Number One newspaper columnist in all of America, a coterie that included the likes of Murray Kempton, Pete Hamill, and Red Smith, among others.

When the Son-of-Sam serial killer needed an outlet, he wrote to Breslin. When the 1962 New York Mets needed to be psychoanalyzed they found their psychiatrist in Breslin. When JFK was gunned down and other journalists stood around Washington waiting for press handouts, Breslin went to the cemetery and interviewed the dead President’s gravedigger.

When his friend Robert F. Kennedy was murdered in front of him, he went to work and through his grief wrote powerful journalism. He always played the game, but he always played it by his own rules.

His first hit book was "Can’t Anyone Here Play This Game?"—supposedly based on a Casey Stengel quote—a hilarious look at the hapless 1962 New York Mets, a team that somehow managed to lose 120 of 160 games. The book became a bestseller, but Breslin remembered it as the book that got him “outta hock.”

I asked Breslin years later if Stengel had really given him that quote. “Nah,” he told me, but he didn’t seem to carry much remorse about making it up either.

He had a unique talent for journalism. He wrote excitedly with great humor and, at times, great pathos. He is most famous for his column about John F. Kennedy’s grave digger at Arlington National Cemetery.

Breslin told me that he was hanging around the press room in the White House, waiting, when he said to columnist Art Buchwald that “he had to get outta here.” He went to the cemetery and the result was “Digging JFK’s Grave Was His Honor,” a story about Clifton Pollard, the man called in on his day off to dig the President’s grave. Pollard was proud to serve his president. “It’s an honor for me to be here,” Breslin quoted him. [Read the column here] Years later Breslin was still proud of that column and told me that “they still teach it at the Columbia University School of Journalism.” Not bad for a college dropout, he didn’t bother to add.

He was a Democrat and a very liberal one. In 1969, he ran for City Council President on a ticket led by author Norman Mailer. He defended the poor, the black and the downtrodden. He had a great knack for getting to the root of the problem.

Former Mayor Robert F. Wagner, who had been ambassador to Spain, decided to return to New York to run for mayor again. Breslin cut him no slack: “Robert Wagner is so attuned to the times that the first person he called for support when he got back to the city was Cardinal Spellman.” Spellman had been dead for two years.

His quixotic run for public office—it was based on the premise that New York City should secede from New York State and become the nation’s 51st State—revealed a lot of frustration and bitterness towards the political establishment. In his wonderful book about being the campaign manager for the Mailer-Breslin ticket, "Managing Mailer," writer Joe Flaherty of the Village Voice captured a rant of Breslin’s that would make Brendan Behan blush.

Breslin, Flaherty wrote “exploded into a monologue that ran second only to Molly Bloom’s. ‘Norman, stop the fuckin’ Mickey Mouse shit. There’s no issues in this town. Leave that Mickey Mouse shit to those other clowns. Just get on TV and look at the camera and say, ‘All these other guys are full of shit.’ So what if they blip you out. People will be able to read your lips. Every asshole sitting on a bar stool in Brooklyn and Queens will fall on the floor laughing and run out and vote for you. Fuck issues—this city is lost.’”

He and Mailer of course lost, but they challenged the status quo and brought a little humor to a humorless campaign and a humorless time in American politics. [When asked how he’d get rid of the snow that had crippled New York for a month the previous winter, Mailer replied he’d “piss on it.” To many, it surpassed the efforts of Mayor John Lindsay’s Sanitation Department during the crisis.]

He was a fierce opponent of the Vietnam War and his columns about lonely coffins arriving at obscure air force bases carrying the anonymous dead helped America realize the cost of this misguided war. He was all-in for Robert Kennedy for President in 1968, but with Kennedy’s death he retreated to Ireland for a time. The book that came out of that time was "World Without End, Amen," which is about the Troubles in Northern Ireland, but contains maybe the best 100 pages ever written about the Irish-Catholics then living in New York City.

The corruption of the Nixon Administration brought out the best in Breslin and his quest for justice. The resulting book, "How the Good Guys Finally Won," is a look at the fall of Nixon through the eyes of his friend, top Democrat Thomas P. (Tip) O’Neill. At times, you are laughing out loud at what is going on and at other times you wonder how a twisted man like Nixon had become president.

But not all was doom-and-gloom for Breslin. In his columns he had wonderful, outrageous characters like the arsonist Marvin-the-Torch, bookie Fat Thomas, the shifty Klein-the-Lawyer and master thief Jerry-the-Booster, who could clean out a department store in less than 15 minutes. He also wrote hilariously of the Mafia in The Gang That Couldn’t Shoot Straight, which was made into a movie and was a launching pad for the likes of Robert De Niro and Jerry Orbach.

The thing about Breslin that always sticks out is that is his courage. He was not afraid of anyone and he was not afraid to take on anyone—and that included his own Church. In 2004, he wrote "The Church That Forgot Christ," which excoriated the Church for its handling of the sex abuse of children.

“I really believe the hierarchy of the Catholic Church in America are pimps,” he told me, “and the rank-and-file are pedophiles. Deny it if you can. Don’t tell me it’s the world of only a few.” I asked him if he could say just one thing to the Pope, what would it be? “Why do you stand between God and me? Who are you to get in the way?”

And, although his wife, Ronnie Eldridge, was a city councilwoman at the time, Breslin had no problem going after “America’s Mayor,” Rudy Giuliani. To Breslin, the autocratic Giuliani was a “Young Mussolini” who had “the face of a cadaver.” He wasn’t too crazy about Mayor Ed Koch either. But he loved Mario Cuomo and it was because of Breslin's columns that Cuomo got into politics and eventually became governor of New York.

In 1986, he won the Pulitzer Prize for his piece about the demise of an AIDS victim. It was called “I Lived Without Words” and it is the heartbreaking story of a young gay man from Georgia who moves to Manhattan and discovers he has AIDS and the trials he goes through with not only the disease, but with his family. The Prize was long overdue. Many of Breslin’s columns over the years could have easily earned a Pulitzer, including the one about JFK’s gravedigger.

The two things that stand out about Breslin are his sense of justice and his sense of humor. At the beginning of every year he would write “People I’m Not Talking to This Year.” One year I remember he did a number on William F. Buckley, Jr. He got even with Buckley by quoting the terrible writing from his columns, which made no sense at all. Buckley may have had "God and Man at Yale," but Breslin could really write.

At the end of Edwin O’Connor’s "The Last Hurrah," the dying mayor looks at one of his acolytes, Ditto, and says, “How in the world do you thank a man for a million laughs?” That’s how I feel about Jimmy Breslin, a bigger hero to me than any “cheap politician” (as Breslin himself would say) who made me laugh and made me think about unpleasant things that, maybe, I didn’t want to think about. I have lost a friend and hero today and so has his city, “The City of New York,” as he so lovingly put it.

* Dermot McEvoy is the author of "The 13th Apostle: A Novel of a Dublin Family, Michael Collins, and the Irish Uprising" and "Our Lady of Greenwich Village," now available in paperback from Skyhorse Publishing. He may be reached at dermotmcevoy50@gmail.com. Follow him at www.dermotmcevoy.com. Follow The 13th Apostle on Facebook at www.facebook.com/13thApostleMcEvoy.