The amazing life of Michael Corcoran: From Sligo to Abe Lincoln's US Civil War Irish Brigade

On Sept 21, 1827, Michael Corcoran, a son of Sligo who became a Brigadier General in the US army, and a friend of President Lincoln was born. 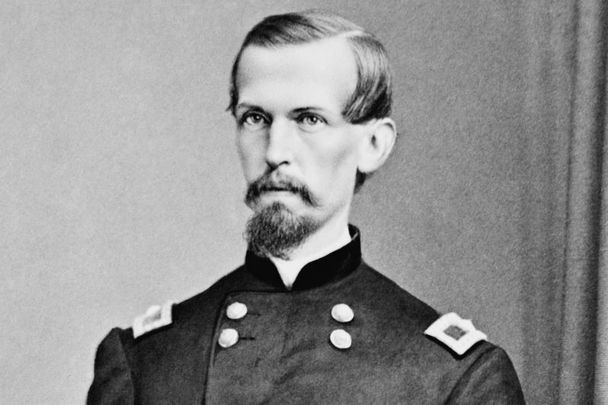 It is 193 years since US Army Brigadier General Michael Corcoran, a hero of the US Civil War, was born in County Sligo.

Michael Corcoran was also a Fenian and his loss was greatly felt among the Irish American community.

Corcoran was born in Carrowkeel, Ballymote. At the age of 19, he joined the revenue police in Donegal where his job was to bust illegal poitín stills but, while in Tir Conaill he joined the Ribbonmen - a secret society dedicated to protecting Catholic and tenant rights.

In 1849, Corcoran suddenly took leave of Ireland and sailed for America where he worked as a clerk in Hibernian House, in New York, and married the owner's niece, Mary Heaney.

Corcoran got involved in local politics in Tammany Hall and enlisted as a private in the New York militia. He rose up the ranks to became Colonel but, in 1860 his Fenian credentials shone through when he refused to parade his regiment in honor of the Prince of Wales who was visiting the Big Apple. Corcoran was stripped of his command and placed under arrest but, then the American Civil War broke out and Corcoran's court-martial was dropped.

Corcoran led the 69th New York militia at the first Battle of Bull Run in 1861. He was taken prisoner and put in Richmond Jail where the threat of execution hung over his head. By August 1862 he was exchanged in a prisoner swap.

Corcoran was made Brigadier General and was hosted at the White House by President Lincoln. The President was impressed with the Sligo man and asked him to recruit more Irish, due to their fighting spirit, and Corcoran raised an Irish legion of four regiments to defend Washington.

Corcoran was in Fairfax Virginia in the Winter of 1863 and while riding his horse through the woods his steed suddenly got startled and he was thrown off. Corcoran fractured his skull and died at the age of 36 on December 22nd. Tragically, his wife had suddenly died just months previously.

Corcoran was buried alongside his wife at Calvary Cemetery in New York, where today a granite headstone lists the achievements and patriotism of Michael Corcoran.

For Irish people, the highest honor to bestow on someone is a ballad and for Michael Corcoran, he was honored with many! One ballad which was very popular in the 19th century Irish America was Richmond Jail, sung to the air of the Union Cockade.

(Dedicated to Michael Corcoran of the Irish Brigade.)

This southern rebellion has raised a mighty fuss,

And before it ends I fear it will make things a great deal worse,

With Stonewall Jackson at their head they threaten us to whale,

And every man they take from us to lodge in Richmond Jail.

We'll go down to rebeldom with Corcoran's Brigade.

That traitor old Jeff Davis thinks that we are near whipped,

But we'll show him that like Lawrence we will not give up the ship,

John Bull with intervention thinks our gallant boys to scare,

But he'll soon find out we can't be beat or sent to Richmond Jail.

Foremost among all others the 69th did go,

To meet their southern foemen in response to Lincolns call,

The gallant Corcoran at their head as they marched down Broadway,

Not thinking then how soon he'd be locked up in Richmond Jail.

That ever memorable day of the battle of Bull Run,

Bold Corcoran was in the field and showed the rebels fun,

Twas then that he was taken boys and lodged in Richmond Jail.

It was while this in bondage they offered him parole,

But he nobly did refuse it saying I would not sell my soul,

Your parole of honor you may keep I'd rather much remain,

Yes and rather die than take it to get out of Richmond Jail.

At length, the glorious day came on which he did return,

And many a gallant Irish heart with noble ardour burned,

They flew unto his standard and swore they would not fail,

To avenge his foul imprisonment way down in Richmond Jail.

Soon this gallant Irish corps to rebeldom will go,

To confront with man and musket Stonewall Jackson's rabid horde,

At the point of the bayonet for which they are so famed,

Then give me your attention I'm about to end my song,

The few words I've to say to you will not detain you long,

When next they meet our Corcoran the rebels raid will quail,

And skedaddle back to Richmond from that man of Richmond Jail.