40,000 Irish fought for the Confederate Army in the US Civil War

A fascinating book, The Irish at Gettysburg, says the real story of the Irish who fought with the Confederate Army is only just starting to be told. 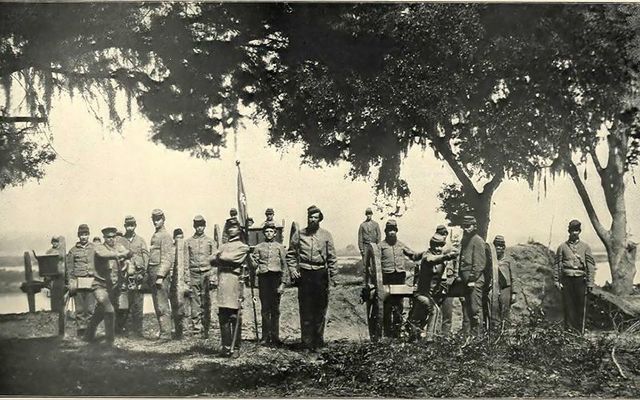 Seemingly everything possible has already been written about the climactic battle of Gettysburg, Pennsylvania—three nightmarish days of intense combat in early July 1863—that determined America’s destiny.

Consequently, for people craving something new beyond the standard narrative so often repeated throughout the past, they were sorely disappointed by the new Gettysburg titles released for the 150th anniversary.

In fact, this unfortunate situation that has fully revealed the overall sterility of the Gettysburg field of study has resulted in the writing of this book to fill this significant void in the historical record. It tells the story of the Irish and their key roles at the battle of Gettysburg and the overall Civil War.

This important chapter about the vital contributions of the most unique ethnic and obscure fighting men, especially in the ranks of the Army of Northern Virginia, has not been previously revealed in full, even in books about the most written-about and decisive confrontation in Civil War—and American—history. Therefore, this analysis of the importance of the Irish role at Gettysburg represents one of the final frontiers of Gettysburg historiography.

Because of their longtime absence from the historical record, the contributions of these young Irish men and boys at the decisive Battle of Gettysburg will be explored. The unforgettable story of a large number of Irish Confederates who played leading roles in the most climactic moment of the battle, “Pickett’s Charge,” on the hot afternoon of July 3, 1863, needs to be told.

These young men and boys from Ireland, especially the most recent immigrants, were literally caught between two worlds—the ancient homeland and the New World—when they stoically advanced across the open fields in the ranks of Lee’s greatest offensive effort. The Irish on both sides included soldiers who still spoke the Irish language.

Large numbers of Irish on the Confederacy side marched to their deaths during the audacious bid including  Pickett’s Charge to pierce the right-center of the Army of the Potomac at a weak point of the Cemetery Ridge defensive line. Before the most famous attack of the Civil War, Irish Confederates played leading roles in equally determined assaults on the second day at both ends of Major General George Gordon Meade’s lengthy defensive line centered on the expanse of Cemetery Ridge: East Cemetery Hill on the north, where large numbers of Louisiana Irish Rebels charged the heights with the war cry “We are the Louisiana Tigers!”; and in the all-important showdown for possession of strategic Little Round Top, where Irish soldiers of the Alabama Brigade and the Texas Brigade performed magnificently in determined assaults on the line’s southern end.

Ironically, the Irish soldiers were often the butt of jokes and racial stereotypes among the non-Irish, providing a source of soldiery humor across the South. Even the famous diarist Mary Chesnut, who had her own Irish servants, wrote how she saw the Irish nurse of the President Jefferson Davis family “weeping and wailing as only an Irish woman can.”

Sadly for the historical record, these Irish Confederates have left us with relatively few letters, diaries or memoirs in private collections and archives around the United States, an unfortunate development that has doomed these Sons of Erin and their notable battlefield achievements to obscurity, especially in relation to the Battle of Gettysburg.

In fact, no aspect of Gettysburg historiography has been more overlooked than ethnic studies that have revealed new insights into the overall American experience. This has been an ironic development because of the important roles of Irish Confederates during the three days at Gettysburg, providing additional evidence of an especially rich field of study.

By 1861, the largest immigrant group in the South was the native Irish (Catholics) and Scotch-Irish (Protestants). Contrary to the stereotype that the South consisted of a homogenous Anglo-Saxon society transferred from England, the South was overflowing with hardworking and devout Emerald Isle immigrants.

By 1860, the South was a multicultural and multiethnic nation that mocked the postwar stereotype of the homogeneous Anglo-Saxon (or Aryan) population that allegedly represented Anglo-Saxon purity—one of the greatest and most enduring Lost Cause myths of the Old South. As the largest immigrant group in the South in 1860, the Irish people and their vibrant culture added the most colorful component of what was a true heterogeneous mix, which mirrored the demographic realities of the South’s population and, in turn, Confederate armies, including the Army of Northern Virginia.

Unfortunately, the romance of Lost Cause myths has greatly obscured the South’s ethnic realities and complexities, especially the disproportionate Irish wartime contributions in a great silencing of the historical record. Offering a comforting psychological explanation and moral justification in order for the vanquished Southern people to minimize their humiliating defeat and subjugation, these persistent racial myths were developed by an active group of postwar southern writers, ex-Confederate leaders, and historians to explain their disastrous defeat and to regain the moral high ground lost by slavery’s defense.

Fortunately for the Confederacy in terms of its war-waging capabilities— in a parallel that had been seen in the thirteen colonies just before the American Revolution—the South possessed a vast Irish manpower pool by 1860. Tens of thousands of immigrant Irish had flooded into the South, especially major urban areas (most of all New Orleans) because of the exodus created by the Great Potato Famine of 1845–1849. Known as the An Gorta Mor—ancient Gaelic for “The Great Hunger.

Unlike in major northeastern cities, the much easier assimilation of Irish immigrants into the overall mainstream of a more open and tolerant Southern society—the unity of whiteness in a slave society enhanced equality for whites —ensured a deep loyalty, including Democratic Party adherence, to their adopted homeland and a widespread wearing of the gray.

Most revealing, during the 1850s, ugly anti-Irish riots swept through the ethnic slums and ghettoes of New York City, Philadelphia and Boston and even targeted Catholic churches, while the Irish were accepted as full-fledged citizens in Richmond, Mobile and Charleston. Clearly, this was a significant difference not lost on tens of thousands of Sons of Erin across the South with their adopted homeland’s call to arms in April 1861, after the firing on Fort Sumter in the harbor of Charleston, South Carolina.

Therefore, the majority of the Irish people found that the South, not the North, was the true land of liberty, offering greater social and economic opportunities and easier access into the overall mainstream of everyday life. Indeed, since before the nation’s founding in the fiery forge of a people’s revolution, the South and its people—not only in the cities but also in the rural areas and in the western frontier regions (as far west as the plains of west Texas)—were fully receptive to the Irish refugees from hard economic times, famines and British oppression.

In total, an estimated forty thousand Irishmen fought for the Confederacy. During the climax of the bloody showdown at Gettysburg, large numbers of Ireland-born Confederates marched forth in lengthy formations that flowed with mechanical-like precision over the open fields during Pickett’s Charge.

Fighting against centralized authority had become a way of life to generations of Irish, and the Civil War was only the latest chapter of what had become almost a cultural tradition to the Sons of Erin. The ancestors of many Irish Catholics of the Army of Northern Virginia (ironically, like the blue-uniformed men of the Irish Brigade) had been liberty-loving rebels who had risen up against English invaders centuries before on the ancient homeland.

During what was actually only their most recent revolution against the domination of centralized authority (now located in Washington, D.C., and not London, but still a faraway power that represented arbitrary rule) and a dissimilar opponent, Irish Confederate companies of numerous regiments attacked over the open fields of Gettysburg with colorful battle flags of green emblazoned with ancient patriotic slogans while unleashing Irish war cries that had been heard on Ireland’s most famous battlefields in a storied past.

In regard to explaining the common motivations of the Irish soldier that were atypical compared to other Southern soldiers, no Confederates at Gettysburg fought, in general, less for slavery than the Irish. After all, the vast majority of these Irish immigrants in gray and butternut were relatively poor and primarily menial workers of the lower class—the former peasantry of the so-called old country. These tough men had mostly been common laborers who had worked on the docks, railroads, levees and small farms of the South.

Consequently, relatively few Irish (more the case of Catholics than Protestants—the Scotch-Irish—especially the Great Famine Catholics) in the South owned slaves by 1860. In fact, by inclination, the Irish, especially Catholics, in general were the least likely to be slave owners, in part because they had hailed from a long-oppressed minority and were more empathetic than Anglo-Saxons, who possessed a long history as conquerors.

In truth, these Irish also fought from a sense of sincere gratitude to a Southern society that had accepted them and treated them more fairly than Northern society. Consequently, they were infused with a vibrant new nationalism of a kind experienced by their Irish ancestors in battling the English invaders over the centuries. Because the South had so thoroughly accepted Irish (Catholics and Protestants) for generations and given ample economic opportunities for them to advance up the social ladder unlike in northeastern cities, this path of upward mobility helped to open up many leadership positions in Confederate armies. Most of all, a vibrant sense of Irish nationalism evolved smoothly into the overall mainstream of Southern nationalism by 1861, because the two revolutionary struggles of the common people were seen as largely one and the same, despite existing on opposite sides of the Atlantic and separated by thousands of miles—a righteous, if holy, struggle for self-determination (“home rule”) by the common people.

And no enduring idea from the pages of history and a misty Celtic past was more foremost in the hearts and minds of hundreds of these brave Sons of Erin than that Ireland’s centuries-long struggle against the oppression of Great Britain was the same as the Confederacy’s struggle for self-determination.

Excerpted from The Irish at Gettysburg - Amazon link here.