A new lease of life given to a rare clip of Republican leader Michael Collins using advanced modern technology. 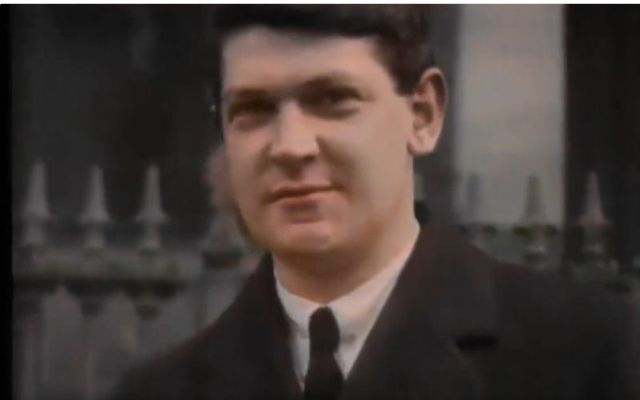 The rare video of Republican leader Michael Collins is given a new lease of life with the use of modern technology.

John Breslin, the author of Old Ireland in Colour, has used his skill of colorizing archive footage of Ireland's past on a video of Republican leader Michael Collins.

The 15-second clip shows Collins looking at the camera and giving a smile before turning his attention to someone beside him.

Using advanced color technology, Breslin managed to modernize the black and white video. Though we think the clip looks pretty incredible, Breslin noted on Twitter that "it's not perfect colourisation; looking at it now I see various things to fix; but not bad for a first."

John Breslin is a Professor at NUI Galway, where he has taught engineering, computer science, and entrepreneurship over a twenty-year period.

In 2019, author John Breslin founded the Old Ireland in Colour Project which quickly went viral on social media. Using a combination of cutting-edge artificial intelligence technology and his own historical research, Breslin meticulously colorizes archive pictures with breathtaking attention to detail and authenticity.

He has since co-authored the critically acclaimed series of books Old Ireland in Colour alongside Dr. Sarah-Anne Buckley. The publication focuses on the rich history of Ireland and the Irish through the color restoration of stunning images throughout the 19th and 20th centuries.

Their latest addition, Old Ireland in Colour 2, was released in September and continues to celebrate the Irish from all walks of life and from all four provinces, as well as the Irish abroad.