Nancy Pelosi backing Irish in Brexit is a mistake 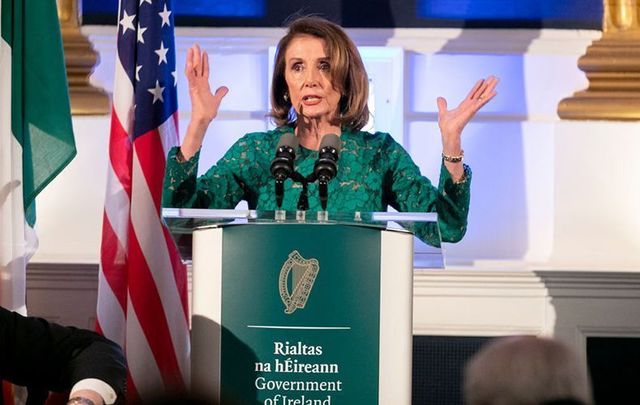 No doubt they mean well, but U.S. House Speaker Nancy Pelosi and Congressman Richard Neal threatening new British Prime Minister Boris Johnson over his insistence that the Irish backstop must be scrapped is a mistake

U.S. House Speaker Nancy Pelosi last week warned Johnson that Congress will never endorse a trade deal with the U.K. if the Good Friday Agreement is put in danger by a Brexit which results in a border in Ireland.  This was echoed by Neal, the head of the House Ways and Means Committee which deals with trade, who bluntly warned that a trade deal with the U.S. will not happen if Brexit risks the return of a border here.

This is important for Johnson because he has repeatedly said that once the U.K. leaves the EU it will be able to do a "fantastic" trade deal with the U.S.  He seems to base this partly on his best buddy relationship with President Trump.

The reality is, however, that it's not something The Donald can gift Boris.  Any trade agreement has to be endorsed by Congress.

And Pelosi and Neal have said there is no chance whatsoever of a U.S.-U.K. trade deal being approved by Congress if the Northern Ireland peace agreement is put in jeopardy by Brexit and the border issue.

Neal and Pelosi during their visit to Derry.

It's not just Pelosi and Neal who are saying this. Other members of Congress have joined in, backed up by influential voices in Irish America.

No one—not in the U.S., the U.K. or Ireland—wants to see a border here again.

However, the U.S. lobby on this issue seems to be forgetting that Johnson has repeatedly said that he does not want a hard border here either and his government will never erect one.

Despite this, he is adamantly opposed to the backstop, which he says has to be "abolished" from any withdrawal agreement with the EU because it is "undemocratic.”  This was challenged by Neal in a recent interview with The Irish Times.

"If Boris Johnson calls the backstop undemocratic then he misses the point that people in the North and in the Republic both voted for the Good Friday Agreement. It was a democratic exercise in a representative democracy,” Neal said. 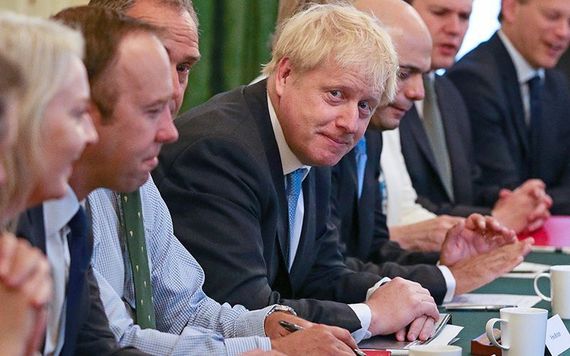 But that is only half the story.  When Johnson says the backstop is "undemocratic" he is referring to the way it could trap the U.K. in the EU into the future despite the majority in Britain having voted to leave in the 2016 referendum.  That, he says, would undermine a democratic decision taken by the British people, and is, therefore "undemocratic."

Further to Neal's point, the fact is there is no explicit prohibition on the return of a border in the text of the Good Friday Agreement.  The reason is simple—no one at the time in 1998 imagined in their wildest dreams that the U.K. would ever leave the EU and a border might be necessary at some point in the future.

That said, it is true that the undertakings and processes in the agreement to build peace in Ireland are greatly enhanced by the absence of a visible border.  For that reason, one can argue there is an implied acceptance in the agreement that there can never be a border here again. But it's not explicit, as Neal and others assert.    There are two reasons why the border in Ireland vanished.

The first was the agreement and the peace it created which meant that the hard border which had been there for security reasons was no longer necessary.

The second was that Northern Ireland (like the rest of the U.K.) and Ireland were in the EU Customs Union and Single Market and therefore no border was required for economic or trade reasons.  Indeed the whole point of the Customs Union is the absence of internal borders.

Unfortunately, that is now changing since the U.K. (including Northern Ireland) is leaving the EU.  So one of the fundamental reasons why there is currently no border in Ireland will no longer be there once Brexit happens.

Read more: These pictures highlight just how difficult a Brexit hard border would be

If Northern Ireland is outside the EU and Ireland is inside, there will have to be a border after Brexit unless a comprehensive free trade deal can be worked out between the EU and the U.K.  And whether we like it or not, the major impediment to progressing towards that is the so-called backstop.

So it's important to remember what the backstop is and why Johnson now wants it to be dropped from any withdrawal agreement he can negotiate with the EU.

Soon after the referendum in 2016 and her arrival as prime minister, Theresa May agreed that there should not be a hard border in Ireland after Brexit and that other solutions would have to be found.

Accepting that was a condition for the start of negotiations on a withdrawal agreement between the U.K. and the EU, which she was desperate to get going.

So she agreed that the no-border guarantee would stay in place until a trade deal and other arrangements that would make a border in Ireland unnecessary would be concluded.  It was a backstop, a guarantee that whatever happened in negotiations there would not be a hard border in Ireland.

The Northern Ireland border as it stands.

Getting this to work turned out to be much harder than May imagined.  She initially proposed that Northern Ireland would remain in alignment with the rest of the EU so there would be no need for a hard border between north and south.

The Democratic Unionist Party, however, believed this could lead to the separation of the North from the rest of the U.K. over time. And since they were propping up May's government they were able to force her to drop it.

May's solution then was to keep all of the U.K. in alignment with the EU while the future trading arrangement would be negotiated.  A close enough deal would mean that a border in Ireland would be unnecessary.  In the meantime, the backstop would be there to prevent it.

There was a critical difficulty for Brexiteers in this, however, because the withdrawal agreement May negotiated with the EU—which included the backstop—committed the U.K. to stay in close alignment with the EU until a final trade deal was agreed, a process that could take years.

To get rid of the backstop, that final deal would have to be good enough to make a border in Ireland unnecessary.  The withdrawal agreement also specified that ending the backstop had to be a mutual decision, which effectively gave the EU a veto on when Britain could leave the EU.

The Brexiteers, including Johnson, believed this could trap the U.K. in the Customs Union for many years, possibly permanently, and they rebelled against it.  That is the reason May's withdrawal agreement was repeatedly rejected in votes in the House of Commons, eventually leading to her downfall and Johnson's arrival as prime minister.

This is the reality that underscores the determination of Johnson and the Brexiteers to get rid of the backstop.  It's not that they want a border back in Ireland.  It's that they do not want the "alignment' that would be necessary because it could trap the U.K. in the EU.

Johnson has made it absolutely clear that if he cannot get a deal without the backstop then the U.K. will crash out of the EU in a no-deal Brexit on October 31.

That would be a disaster for the U.K., but it would be even worse for Ireland and we and our friends in the U.S. should be doing everything we can to avoid it.

As the reality of a looming catastrophe for Ireland becomes ever clearer, there is a growing feeling here that we need to modify our stance on the backstop to avoid that.  There is also a growing awareness of the absurdity of the present situation because if the U.K. does crash out there will be a border here anyway, imposed by the EU to protect the Customs Union.

It's a choice between a definite border in three months or no change for five years or more by easing up on the backstop to facilitate a U.K.-EU deal.

Taking a hard line on the backstop may have made sense two years ago.  But it makes no sense now when what we desperately need are solutions.

Our U.S. friends threatening to block a trade deal with the U.K. is not a solution because it won't change Johnson's mind.  Instead of helping it may actually make things worse by inflaming the situation at a time when everyone needs to dial the rhetoric down a few notches.

Taoiseach Leo Varadkar and the Irish government have got themselves out on a limb on the backstop.  Instead of encouraging them to stay there, our American friends should be helping them to find a way back.

That means modifying our position, including offering a time limit on the backstop of five years or so.  That could result in a good withdrawal agreement that would minimize the economic damage to us, and also give plenty of time to find technical ways to avoid a visible border.

Johnson has said that a time limit won't be enough, but when push comes to shove he might go for it.   And a wily operator like Pelosi should know that.   Avoiding a no-deal crash out by the U.K. has to be the top priority for Ireland right now.  We need to do whatever we can to avoid that disaster.

Simplistic threats made by our Irish American friends do not help.  Instead of playing to the Irish American gallery for votes, they should be recognizing the complexity of the situation here.