How can a Brexit hard border be introduced in Northern Ireland if the present border weaves through homes and businesses? 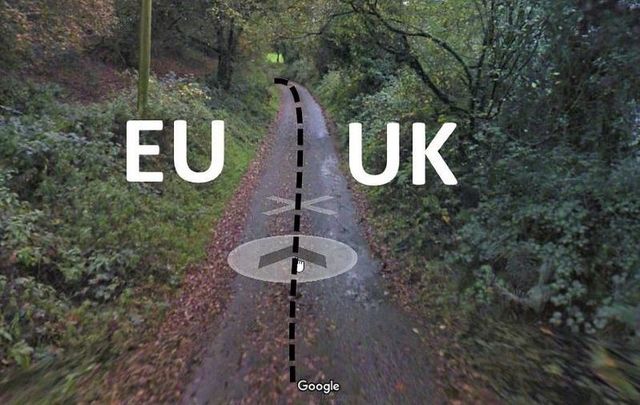 The Northern Irish border weaves through roads, businesses, and homes - how can a hard border be implemented after Brexit? Mark Sugrue, Twitter

The border between Northern Ireland and the Republic of Ireland is, no doubt, complex, but these pictures that Mark Sugrue shared on Twitter cast the issue of a hard border in a new light.

Sharing pictures of the border cutting through roads, businesses, and even homes, Sugrue asks: "Would love to see 'technology' solve this... "

Some fun @BorderIrish crossings between Ireland and the UK. Would love to see 'technology' solve this... #brexit pic.twitter.com/qy7OpHwx3i

This industrial yard is split by the border #brexit pic.twitter.com/aLNvZ8N9Ky

Of another picture, Sugrue asks: "Who drew this border? Were they high?"

Who drew this #border? Were they high? pic.twitter.com/MJk1Yuh14L

Sugrue’s tweets are reminiscent of a 2017 BBC video that showed just how it easy it was to drive back and forth along the border in a matter of minutes:

Sugrue, among the others that have joined in on his thread, raises the issue as Brexit looms with no deal in place and the backstop, the mechanism in place to prevent a hard border on the island of Ireland, remaining the main point of contention.

New Prime Minister Boris Johnson seems steadfast in getting the United Kingdom out of the European Union on October 31, deal or no deal, but has slammed the current Withdrawal Agreement's backstop as "undemocratic."

EU leaders have indicated that they are unwilling to reopen the Withdrawal Agreement to renegotiate the backstop.