Why Britain still can’t treat Ireland as an equal

With Ireland standing by the backstop, the British are increasingly incensed that Paddy won’t lie down on the issue. 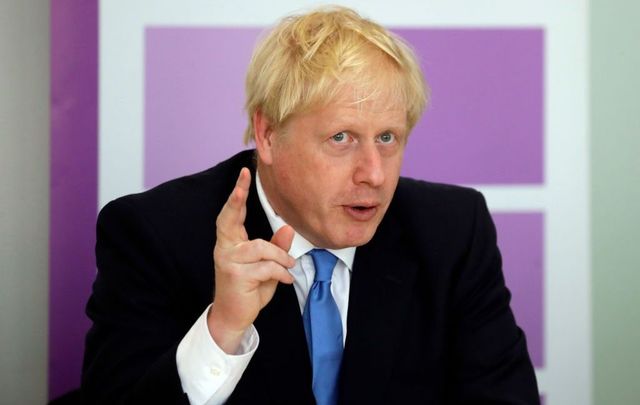 British Prime Minister Boris Johnson speaks during the first meeting of the National Policing Board at the Home Office on July 31, 2019, in London, England. Kirsty Wigglesworth - WPA Pool/Getty Images

With Ireland standing by the backstop, the British are increasingly incensed that Paddy won’t lie down on the issue.

This week, the attack hounds of the British tabloids have been let loose.

In the Daily Mail, columnist Richard Littlejohn wrote that the British Government has “read the riot act to pipsqueak Irish Prime Minister ‘Lenny Verruca,’ reminding him on which side of his bread he'll find the Kerrygold.”

He went on: “As a consequence, ‘Verruca’ is coming under serious pressure at home to stop playing silly beggars on the so-called backstop. If he continues to be Michel Barnier's [the EU’s chief Brexit negotiator] stooge, the southern portion of the Emerald Isle is facing certain economic ruin.”

Over in the Daily Telegraph, Nick Timothy, a former chief adviser to Theresa May, also weighed in:

“With Varadkar’s connivance,” he wrote, “Brussels weaponised the Northern Irish border – and with it the peace process – to lock the UK into a customs union and a colonial status in which we would have to follow EU laws … It must also have been hugely enjoyable for a young Taoiseach, and his deputy, Simon Coveney, to lord it over Ireland’s former imperial masters.”

Another writer in the same paper was even blunter: “What is tough is watching the ridiculous behaviour of the Taoiseach Leo Varadkar and his foreign minister, Simon Coveney, trying to destroy, like wilful children, relations with an ancient and friendly neighbour.”

Read more: “Why isn’t he called Murphy like all the rest of them?” Potential British PM says of Varadkar

Things are getting desperate for the British Government because Ireland isn’t following the script. It’s supposed to cave-in to accommodate British ineptitude. So diplomatic niceties are flying out the window and a grisly British contempt for Ireland has been reawakened.

Take Conservative MP, Priti Patel. She previously argued – oblivious to the historical resonance - that Britain should use the prospect of Brexit-inspired food shortages in Ireland to force Leo Varadkar to relent over the backstop. She has just been made Home Secretary in Boris Johnson's government, the joint-third most powerful member of the British Cabinet.

It’s obvious “They don’t like it up ‘em!” as Corporal Jones used to say in Dad’s Army, perhaps Britain’s best-loved sit-com from the 1970s but aired endlessly ever since on mainstream television.

It’s about a unit of the part-time reserve army on stand-by against the threat of German invasion. Bumbling old men playing at soldiers and led by a pompous bank manager, Captain Mainwaring, who takes the whole business deadly seriously, with predictably comic effects.

Dad’s Army is mainly viewed as a satire on the British class system, but it also reveals an enduring truth about the national mentality. Britain sees itself as the plucky underdog, warding off nasty foreigners who want to challenge our way of life. It neatly sums-up why being a Member State of the European Union has been so uncomfortable for nearly five decades.

The essential feature of the EU is that the 28 members states, large and small, are equals - particularly important given Europe’s bloody and complex history. The whole idea of European co-operation is based on the principles of compromise and mutual respect.

After losing an Empire by the middle of the twentieth century, Britain finds it hard treating other countries as equals. Of course, when it comes to Ireland, there’s a special animosity. Britain really doesn’t like being humiliated by the Emerald Isle.

After 800 years of subjugation, which was ended by a successful Irish revolution - at the height of the British Empire - it’s little wonder the relationship is nuanced and still tender.

But whereas Ireland has blossomed in the EU and is entirely comfortable with co-operating amicably with its European neighbours, Britain feels it has gone down in the world. It doesn’t take much, then, for the bile to rise-up, with Conservative politicians and right-wing newspapers now displaying barely concealed scorn for the Taoiseach, Leo Varadkar.

They resent that throughout the Brexit negotiations, as Britain tries to piece together a deal with the EU on its leaving terms, Ireland has not bowed down and given Britain (or, more specifically, the Conservative Government) what it wants.

Specifically, they want to scrap the backstop. This is the compromise (initially suggested by Theresa May!) guaranteeing there will be no hard border on the island of Ireland by effectively keeping Northern Ireland in the European single market.

Unfortunately, the prime minister might have changed, the arithmetic in the House of Commons has not. Like Theresa May, Boris Johnson is reliant on the ten Democratic Unionists for his parliamentary majority and they smell betrayal, fearing the backstop treats Northern Ireland differently which, as they see it, automatically makes them less British.

So Johnson hopes to drive a wedge between Ireland and the rest of the EU and bounce Varadkar into scrapping the backstop.

During the recent Conservative leadership contest, the new Chancellor for the Exchequer, Sajid Javid (Number 2 in the Cabinet), dismissively referred to Ireland as “the tail that wags the dog.”

While Boris Johnson is said to have remarked of Leo Varadkar, “why isn't he called Murphy like the rest of them?”

Despite the insults and pomposity, the real pressure remains on the British side of the Irish Sea. Johnson wants to leave the EU on October 31 – with or without a deal. He says he would like to avoid a ‘no deal’ Brexit, which would have a crippling effect on the UK’s economy – and practically wipe-out Northern Ireland’s already fragile private sector – but says he will walk either way.

Does he mean it, or is it a high stakes bluff? There’s evidence either way, but he doesn’t have the numbers in the House of Commons to drive through a ‘no deal’ arrangement, with most other parties – and a big chunk of his own – implacably opposed to such an act of national self-harm.

Boris is arrogant, yes, but not stupid. Given the EU remains resolute that there can be no backsliding on the backstop, Leo Varadkar needs to hold firm. Ireland’s done nothing wrong. There must be no hard border and it isn’t Ireland’s responsibility to clean-up Britain’s mess.

As the first country to successfully shake-off the yoke of British imperialism, the Irish need to stand their ground yet again.

Kevin Meagher is the author of "A United Ireland: Why unification is inevitable and how it will come about" published by Biteback