An Irish girl in New York City embraces the concept of Galentine's Day. 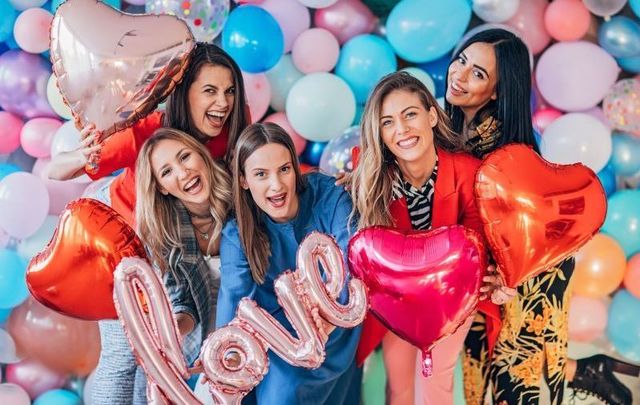 Are you and your gals celebrating Galentine's Day this year? Getty Images

February is both my favorite and least favorite month of the year and yet, is constantly unavoidable. After the hell that is January’s 31 days of botched New Year’s resolutions (mine, my friends’, the world’s), February nonchalantly rolls in with its annual dose of emotional turmoil, kicking off the new year with the same destabilizing roller coaster as every year gone by, and every year yet to come. Feeling the cheer?

Read More: Five of the most important females in Irish history

February pros: My birthday! This is not the pro, I absolutely despise my birthday -but it falls on the same day as my mother’s birthday, and her mother’s birthday, which truly scares the living light out of people and I get to convince everyone that I’m a witch. Major pro.

February cons: Firstly (obvious) it’s completely freezing, to the point of skin chapping and teeth chattering, and one must wear several layers which is both cumbersome and extremely inconvenient.

Secondly (even more excruciatingly obvious) it the fact that February is the host month of the dreaded V-Day that makes me want to, quite frankly, rip my skin off. 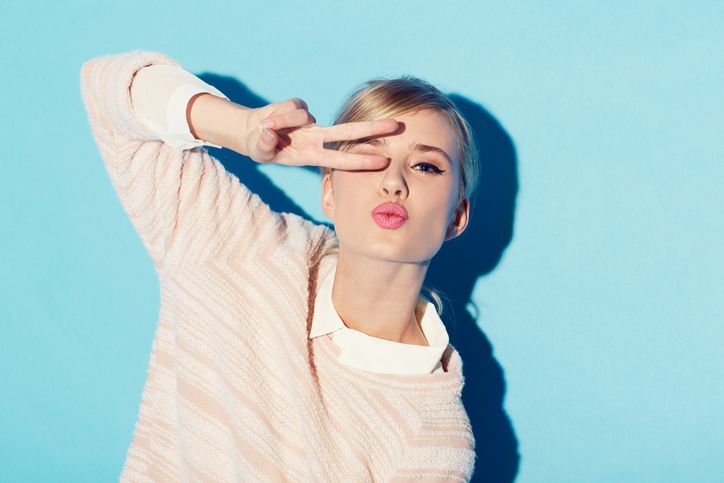 How are you celebrating Galentine's Day. Image: Getty.

It all begins weeks prior, with eagerly anticipated advertisements for lingerie, chocolate, diamond rings and the typical clatter of archaic nonsense that women are supposed to line up for like man-starved, marriage-hunting automatons. Subways are emblazoned with pinks, purples, and rouges as the world prepares to celebrate LOVE and punish everyone else with a fanfare of exclusion.

This, as may be at this point screamingly obvious, is my first year being single on Valentine’s Day since I was 18, and in my first year of college. I spent that glorious night melting 300 pounds of chocolate into a saucepan, which my roommate and I proceeded to eat with our hands while cackling wildly to a Sex and the City marathon. How unbearably, yet deliciously cliché.

Over the years, with various boyfriends and whatnot, I never actively celebrated the day, claiming it to be a Hallmark money-making scheme. Even my parents, in their blissfully happy marriage, continuously chose to boycott V-Day in favor of daily demonstrations of love every single day of the year, rather than guiltily cramming it all into one.

At best, I would wind up having a casual dinner or watching a movie with whoever was unlucky enough to be subjected to my many psychoses that year in an extremely casual way that didn’t actually appear to be celebrating V-Day at all. We would be hanging out anyway, or there would be nothing else to do—and the usual stream of excuses to seem too cool to be conforming.

At worst, I would refuse to spend time with them on that day out of principle (see aforementioned note re psychoses) and it would result in a massively unnecessary argument.

Thankfully, this year, I will be surrounded by a dozen of my favorite female friends and hopefully avoid subjecting anyone to my anti-love tirades on the national day of love. This year, we are stealing Amy Poehler’s "Parks and Recreation" idea to have a Galentine’s Day instead. It’s like Valentine’s Day, but with gals—see what they did there?!

The objective of the game is to gather as many bitterly single women as possible into one room, ply them with copious amounts of alcohol, deafen them with offensively loud ‘90s pop music and ‘80s power ballads and dress them like 16-year-olds going to their first Halloween party without parental supervision. Ideally, the occasion will be filmed for analysis at a later date, and for shaming at bachelorette parties, weddings, and even funerals.

There is a very specific set of rules at play, and many prizes to be won. In a sense, there should be a designated ringleader of sobriety, but at this point in the year, dry January will have driven everyone to even further lengths of alcoholism, and no one will elect themselves to abstain. As such, the rules must be written in sharpie across the wall, so as not to be misplaced or erased at any point in the proceedings.

Prizes go to the first woman to reach different points of public embarrassment or private divulgence, depending on how quickly the night descends into total chaos. First to engage in de-robing of any description, or dancing upon any surface that is not a floor, are two of the most coveted awards of the evening.

First to cry, storm out of absolutely anywhere, or spill her own secrets (or indeed, the secrets of others) rank low on the desired prizes scale, and are usually announced via email up to three weeks after the event, so as to increase personal anxiety to the absolute maximum, and completely ruin the rest of an already horrible month. 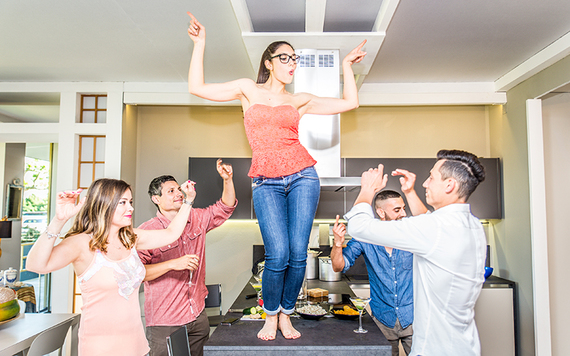 Who will be the first dancing on the tables? Image: Getty.

Involuntary bodily functions will also be awarded, including smaller prizes for runners up, as this tends to be the most popular category, boasting several winners every year. The top prize goes to the gal who stays awake the longest in spite of the 12,000 obligatory tequila shots. And needless to say, for party favors, everyone gets to leave with a baby!

At a time when women’s rights are suffering a monumental landslide, and the worst male humans imaginable continue to be elected to power, it’s time for us to don our pink hats and rally together, to celebrate the hysteria, estrogen and garish pink glitter that these male humans consider our lives to amount to with style.

For the decent male humans that I am lucky to be surrounded by in my little life, I have no doubt they will be joining us, sporting pink, and holding back our hair as we vomit unicorns and rainbows. They’re ready to get nasty with us this Galentine’s Day. Ditch the pin-ups, the 50 Shades of patriarchy and the cheap chocolates. It’s time to get dirty. It’s time to be nasty women.

Will you be celebrating Galentine's Day this year? Let us know how in the comments section below.