With Ireland coming to terms with the three fatalities caused by Storm Ophelia and a possible $1 billion reconstruction, Irish humor is helping the country keep their spirits high. 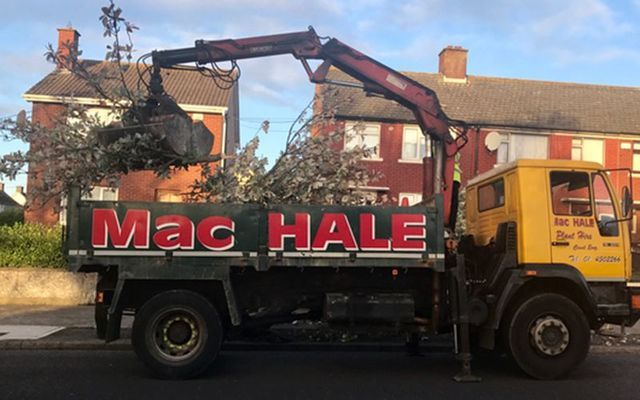 Storm Ophelia Aftermaths. A truck takes away trees that were uprooted as they fall down in Finglas Dublin. Leah Farrell/RollingNews.ie

With a further Atlantic Storm, Storm Brian, set to hit Ireland by this weekend, the Irish are still reeling from Storm Ophelia and its devastation across the country. As communities grieve for the three fatalities, thousands remain with electricity, and an increasing number are left without a water supply.

The worst storm to hit Ireland in 50 years, Ophelia wrought damage to Ireland that is expected to reach up to $1 billion in reconstruction while many are concerned that not enough was done to protect the homeless from the intense weather conditions.

If there was ever a time for some Irish humor, this is it, and so we’ve compiled some of the best Ophelia takes to help keep Irish spirits up.

Stay safe, check in on your neighbors, and make sure to share with anybody you think needs cheering up right now.

#Ophelia the best thing about this hurricane so far is all the Irish massively taking the piss pic.twitter.com/wno27xpF6n

Ireland continues to react to Ophelia with good humor -

We cannot confirm if this is a legitimate text sent by a priest but we’re hoping against all hopes that it is:

With schools and most businesses closed, one cheeky commuter wanted to check with the Irish rail service whether he’d have the day off or not:

We couldn’t let this opportunity pass without having a go at Trump:

She’s going to be a wild one! ⚠️🌊
Latest #Ophelia forecast ⬇️https://t.co/xS2yoUVcMw pic.twitter.com/oLHu2kOPDd

While others really enjoyed the thought of being safely inside while the storm raged outside:

Is there anything nicer than been tucked up in bed while your wheely bin flies passed your bedroom window?!! 😍 Goodnight #Ophelia 🌪🌬🌧

My wife hasn't stopped staring through the window since this storm started. If it gets any worse I'm going to have to let her in. #Ophelia

Many were lamenting the items lost from their gardens:

And we had yet more hits at the English:

And our Irish politicians:

Reassuring words from our head of state in these uncertain times #Ophelia pic.twitter.com/IsgfrKoQST

Reassuring words from our head of state in these uncertain times #Ophelia pic.twitter.com/IsgfrKoQST

The was a return of the masked man behind famed RTÉ newscaster Teresa Mannion:

When #Ophelia hits & you still plan on robbing the bank

Some were lamenting the loss of electricity in a strange way (these candles are ridiculously pricey):

The only candle in my house is a Jo Malone... If power goes it would have been cheaper to buy a feckin generator #Ophelia

The Irish housing market could not escape:

While some businesses made sure their customers knew they were closed:

The amateur weather reports were out in force:

Was it truly great drying weather?

15 peg towel test at 11am, not much to report #Ophelia pic.twitter.com/L7Un94TVPV

Some Irish people weren’t happy that the schools were still closed today:

An absolute disgrace that #Ophelia, #Opehlia AND #Opheila are trending. Open the schools at once.

Should we really be closing our schools when #Ophelia is trending number one in Ireland and #Opehlia number two..

There was plenty of tea and Tayto:

She’s going to be a wild one! ⚠️🌊
Latest #Ophelia forecast ⬇️https://t.co/xS2yoUVcMw pic.twitter.com/oLHu2kOPDd

Ireland: Do we get the day off?

And when the time came, we were happy to pass the baton along to our friends in Scotland:

Scottish twitter, it's over to you. You have big shoes to fill #Ophelia #IrishTwitter pic.twitter.com/Hix0g1q4RW

Again, massive thanks to the amazing Irish emergency services who worked so hard to keep the country safe:

Spare a thought today for all the fantastic emergency responders nationwide who are facing into #Ophelia as we all hide from it, true heroes pic.twitter.com/M9n6owx7rE

How were you affected by Ophelia? Tell us how and where you weathered out the storm in the comments section, below.