The country may be receiving a bashing from Hurricane Ophelia but Ireland isn’t letting it ruin its Monday. 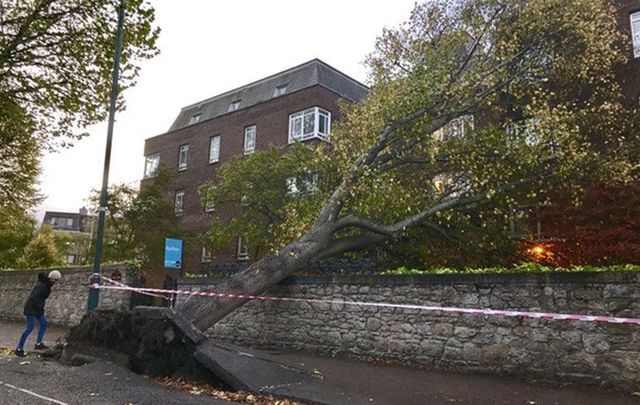 Hurricane Ophelia brings out the best in Irish humor

As the Irish government begins to access the damage and schools receive confirmation that they will be closed for another school day, Hurricane Ophelia fever is still high in Ireland as the largest storm in decades barrels its way across the country.

If there’s one thing Irish people love, it’s talking about the weather, from the grand stretch in the evenings to the great drying weather and so this monstrous storm has whipped the country into an unadulterated frenzy of weather jokes.

While the worst of the storm has passed most of the country, thousands are still without power and there have been three confirmed deaths, leaving strong warnings in place for people to remain indoors, avoid driving if at all possible, and to stay away from the strong seas.

In order to pass the time while Ireland waits out Hurricane Ophelia, Irish people are sharing their very best jokes to keep spirits up in the face of the destruction.

We have, of course, had several jokes about just how much Irish people love talking about the weather:

Irish people have never been so happy; 24 hour guilt-free non-stop talking about the weather! #ophelia

And some absolutely stellar puns:

As the country prepared itself for Hurricane Ophelia’s onslaught, there were, of course, many jokes about how the Irish stock themselves up with food and drink before the winds hit:

Today I realised I married a comedian. Went to Lidl for supplies - he came back with these #HurricaneOpheila pic.twitter.com/pjtJL4XkWZ

Lady beside me in SuperValu shrieked "I FORGOT THE BISCUITS" and pegged back to the choc isle. God I love Irish people. #HurricaneOpheila

I hear that the winds are so strong in some places that it's actually blowing lads into the pub!!!!#HurricaneOpheila

Pantibar is open as normal today, for anyone who wants scream "WE'RE ALL GOING TO DIE!" with the gays. And a pint. #hurricane #ophelia

While others decided to cause a little destruction of their own:

This is my first hurricane so I'm a bit of a novice. When do we start the looting ? #Opheila #Ophelia

As in every emergency in Ireland, Fr. Ted is always on hand with some classics to sum up the weather. How is it that Fr. Ted can fit into absolutely any situation?

Just another one of the countless little things on the day that's in it..hope everybody stays safe. #Opehlia #HurricaneOpheila pic.twitter.com/sHvQzWCV4t

Grand day for a game of crazy golf! #HurricaneOpheila pic.twitter.com/1uQchUCLDU

This previous viral video has re-emerged of an Irish man making up his own disastrous weather forecast:

But in general, many of the jokes have centered around the very Irish “sure, it’ll be grand” attitude:

UK: The sky is blood. The end of days has come

The schools are off tomorrow as well? My kids have done more damage to the house today than a x hurricane could ever.. #Ophelia

When #Ophelia is hitting after 10am but you have an ira meeting at 1pm pic.twitter.com/Qsj2bBRSqI

When there's a hurricane on the way but your ready af #Ophelia pic.twitter.com/58VZ9Is3Bz

Of course, we are taking advantage of any opportunity to have a go at the English:

Two people are dead and thousands are without power, but no, please tell me again about your orange sky, British friends. #Ophelia

Everyone in Ireland having fun with #Ophelia until the English join in and we’re like ‘We’re all dying, it’s not funny!’

English people tweeting about the hurricane like they’re in it ..fuck off and get your own hurricane .. can’t let us have anything #Ophelia

As this diagram clearly shows, #Ophelia was created by protestants in some form of sectarian attack pic.twitter.com/m8Cp9MkuKZ

Thank you for the new pet #Ophelia pic.twitter.com/S9DGadTt99

And our very own Irish politicians:

4000 Gardai trying to arrest #Ophelia as Joan Burton has reported it has locked her inside her house.

Bill Clinton was spotted earlier today walking the Dublin streets, causing some warnings of his own:

Many social media users have also been paying tribute to some of the absolute gallant feats of heroics from the emergency services and even pilots, who are helping everyone stay as safe as possible. Three cheers for this incredible pilot who managed to land in such extreme circumstances:

My parents flight landing @DublinAirport, well done to the pilot of EI491, my heart was in my mouth! #ophelia pic.twitter.com/2EvzA1BKk6

Stay safe, everyone! Share this with someone who you think could use a laugh right now, and let us know in the comment section how you've been getting on.