Ophelia was the worst storm to strike Ireland in over 50 years, since Hurricane Debbie, but what were the largest storms in Ireland's history? 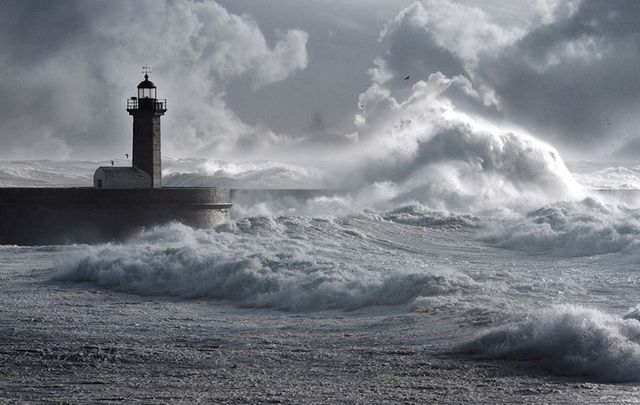 In the eye of Storm Ophelia: Here's a look back at the greatest storms in Irish history.

Ophelia was the worst storm to strike Ireland in over 50 years, since Hurricane Debbie, but what were the largest storms in Ireland's history?

In the wake of Storm Ophelia, an ex-hurricane post-tropical storm,  we take a look back at some of the worst storms to have hit the country.

Ophelia is the worst storm to strike Ireland in over 50 years, since Hurricane Debbie in 1961, which claimed 11 people’s lives and caused massive amounts of property damage.

As Storm Ophelia approached Ireland the meteorological service, Met Eireann, warned of “danger to life and property” and told the public to expect weather to be “stormy with violent, damaging gusts of 120 to 150 kilometers [74.5 to 93.2 miles] an hour. "

The storm is expected to produce rainfall of up to 50mm (1.9 inches) in parts of the west of the country, with isolated totals above 50mm  (1.9 inches) in elevated areas of the south and west. The weather service has also warned of the high risk of flooding due to heavy rain or thunderstorms and storm surges along some coasts.

As Ireland waits for the eye of the storm to pass here’s a run down of the worst storms in Ireland’s history:

Hurricane Debbie struck Ireland on Saturday, September 16, 1961 killing 11 people, including a family of four who were crushed by a falling tree.

The storm was so great that before it reached Ireland it had caused a plane to crash off the Cape Verde Islands killing 60 people.

Winds of over 110 mph were recorded as the center of Hurricane Debbie passed the southwest coast and 113 mph off Malin Head in the north. These were the strongest winds ever recorded in Ireland.

Deaths occurred during the hurricane due to walls, trees and debris falling as well as those due to people drowning. Four members of a family were killed when an ash tree fell across their car. The Irish Times reported that the roof of the car was “crushed to seat level.” Another man was killed when he sat on a bench outside a Dublin hospital and a tree’s branch fell on him.

In Dingle, County Kerry, fishing boats were blown ashore and around the country various crafts were sunk.

Storm Darwin, in 2014, is said to have caused the most damage of any storm in Irish history.

During the storm the Kinsale gas platform, off the Cork coast, was hit by a 80 foot wave – the biggest instrument recorded wave in Irish waters. Shannon Airport recorded 100 mph winds. More than 215,000 homes lost power and there was extreme flooding along the coasts and major damage caused to buildings. As many as 7.5 million trees were blown down – between 5,000 and 7,000 hectares of forestry  which is about one per cent of the national total.

There were at least five fatalities and hundreds of millions of euros worth of damage.

The Night of the Big Wind was a massive hurricane that swept over Ireland on the night of January 6, 1839.

Up to 300 people died, tens of thousands were left homeless, and winds reached well over 115 miles per hour in a category three hurricane. Twenty-five percent of the houses in Dublin were destroyed and 42 ships were sunk.

Some people claimed the temperature reached as high as 75 degrees and the heavy snow of January 5 totally melted.

During daytime on January 6, a deep Atlantic low pressure system began moving across Ireland, where it collided with the warm front. The first news of bad weather was reported in County Mayo. The steeple at the Church of Ireland in Castlebar was blown down.

As the evening wore on, the winds began to howl and soon reached hurricane force. The arrival of the hurricane force winds would never be forgotten by those who lived through it.

The Dublin Evening Post described its arrival with the following: “about half past ten it rose into a high gale, which continued to increase in fury until after midnight, when it blew a most fearful and destructive tempest.”

In Dublin, crowds flocked to the old Parliament House in College Green to hide under the portico, believing it to be one of the few places strong enough to withstand the storm.

Read more about the weather here

Anyone who lived through the blizzard of 1947 will always have it ingrained in their memory. The harsh conditions and the scarcity of fuel and food made life difficult for both man and beast.

The extreme weather began at the end of February 1947 and continued well into the month of March. The snow and wind were quite severe on the last Friday in February.

The snow fell intermittently until the Monday, when a blizzard set in with strong cold winds and harsh daytime snows – this continued for twenty-four hours nonstop. The blizzard was driven by a fierce east wind and swept the country on the Tuesday.

It paralyzed road and rail services and brought all traffic to a standstill. Huge snow-drifts, some up to fifteen feet high, were common in many areas.

The cold weather began around the middle of February and lasted through March. Up to 600 people are said to have died.

The government’s weather forecasters, Met Eireann, issued an extreme weather warning amid predictions of storm gusts of up to 80mph battering the west and northwest coasts.

Peak winds of 71mph swept across the rest of the country thanks to the tail end of Hurricane Katia, which was classified a category four hurricane when it had hit the US coastline earlier that month.

The winter of 1962/1963 continues to be talked about in Ireland – and with good reason. It remains the coldest winter on record in Ireland and the UK since records began, according to IrishWeatherOnline’s Patrick Gordon.

The consistency of low daily mean temperatures that set in during the Christmas period of 1962, which lasted right up to the middle of March, was truly remarkable.

A hurricane downgraded to an extratropical cyclone, Charley brought heavy rainfall and strong winds to Ireland and the United Kingdom and was responsible for at least 11 deaths.

In Ireland, the rainfall set records for 24 hour totals, including an accumulation of more than 7.8" (200 mm), which set the record for the greatest daily rainfall total in the country.

Across the country, the rainfall caused widespread flooding, including two rivers bursting their banks. In the United Kingdom, the storm downed trees and power lines and caused rivers to flood.

Read more about the weather here