St. Patrick's Day in America versus Ireland: American Saint Patrick's Day traditions explained and why they're not par for the course of March 17 celebrations in Ireland. 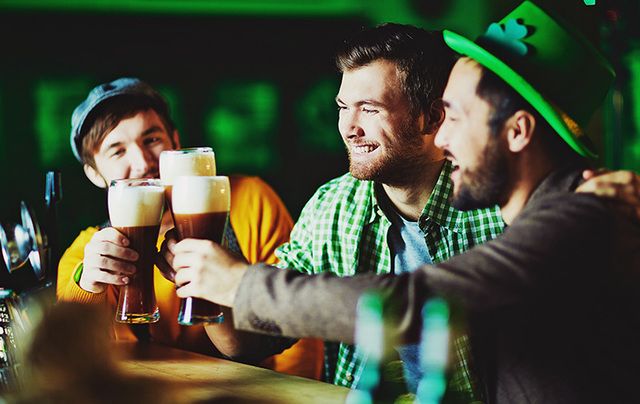 St. Patrick's Day in America versus Ireland: American Saint Patrick's Day traditions explained and why they're not par for the course of March 17 celebrations in Ireland.

Every March 17 in the U.S., millions of Americans celebrate St Patrick’s Day with traditions that have very little to do with Ireland or Irish culture. Why do Americans celebrate St Patrick's Day? Why do people wear green on March 17? We're taking a look at what the Saint Patrick's Day traditions are and sorting them out as either Irish or American.

We've already covered the reason why corned beef and cabbage is an American construct, how St. Patrick's Day parades too were an American invention, and how even having a drink on March 17 originated in the US but there's still plenty more "Irish traditions" that are simply painted green over red, white and blue.

Here’s a list of St. Patrick's Day traditions you’ll find only in America:

1. “When Irish Eyes Are Smiling”

This beloved tune, which many people believe to be a traditional Irish folk song, was actually written and composed by a trio of American songwriters from New York. The song, which has been recorded by the great Irish tenor John McCormack, crooner Bing Crosby, and many others, was originally created for a short-lived 1913 Broadway show called "The Isle O’Dreams".

Want to celebrate the day with a few Irish pints? Don’t be fooled into thinking this ale is imported from Ireland. The beer is brewed exclusively in America and is made in Colorado. Coors purchased the name in 1980.

McDonald’s artificially green, mint-flavored drink first appeared in the U.S. in 1970 and has been a cult hit every St Patrick’s Day since. The limited-time-only menu item only became available nationally in 2012 (until then it was left up to local operators whether to offer the shake), and in Ireland, the 550-calorie drink is listed as “New” on McDonald’s menu.

Don't make this common American mistake and call the holiday "St Patty's Day."  In Ireland, “Patty” is short for Patricia, not Patrick. Pádraig is the true Irish spelling of Patrick, and the correct way to shorten it is “Paddy.”

In American bars, an “Irish car bomb” is a shot of Irish whiskey and Irish cream dropped into a half-filled glass of Guinness. The provocative name, suggestive of the car bombs that were used during the Troubles of Northern Ireland, when thousands were killed, would never be used in Ireland.

Despite its leprechaun mascot, you won’t find this “magically delicious” cereal, on any Irish breakfast table. Lucky Charms, which first appeared in 1964, is made by Minneapolis-based food giant General Mills.

The “sexy lady leprechaun” has become a popular St Patrick’s Day costume in recent years. However, according to Carolyn White, author of "A History of Irish Fairies", there is no record of female leprechauns in Irish lore. And by the way, leprechauns traditionally wore red, not green.

You won’t find green beer in Ireland. Says one Irish ex-pat living in the U.S, “I think if you dyed beer green in Ireland, they’d punch you.”

Any we've missed? Let us know in the comments section below.