One Irish woman who had four family members killed during the 1974 Dublin Monaghan bombings said that The New York Times should apologize for its "Irish Car Bomb" crossword clue. 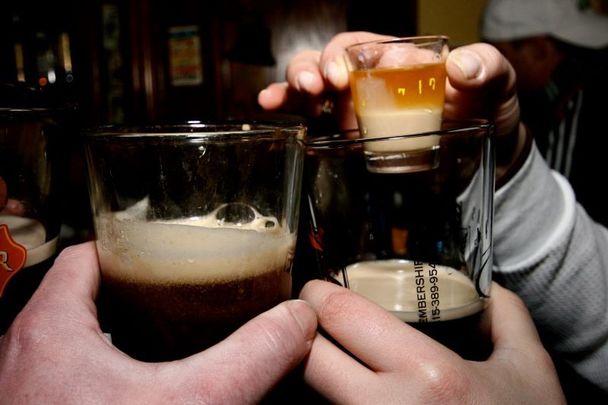 An Irish Car Bomb cocktail involves dropping a shot of Irish whiskey and Baileys into a pint of Guinness. Flickr / A. Strakey / CC BY-ND 2.0

“Irish ____ cocktail served on St. Paddy's Day” was the clue in this past Sunday's edition of the New York Times crossword puzzle that is drawing Irish criticism.

"Car bomb" was the correct answer in the puzzle crafted by Sam Ezersky, the Digital Puzzles Editor at the New York Times.

Alice O'Brien tells Joe she finds the clue in yesterday's @nytimes crossword a disgrace - “Irish [blank]: cocktail served on St Paddy’s Day.” The answer is…CARBOMB. She lost her sister, her husband and their two babies in the Dublin Bombings. She wants @nytimes to apologise. pic.twitter.com/lLddjH2WNc

Among the callers was Irish woman Alice O'Brien, whose sister Anna, Anna's husband Johnny, and the couple's baby daughters Jacqueline and Ann Marie were among those killed during the Dublin and Monaghan bombings on Friday, May 17, 1974.

On that day, three no-warning car bombs were detonated in Dublin's City Center at 5:30 pm, killing 26 people and an unborn baby. Later, at 7 pm, another bomb went off in Monaghan killing a further seven people. The bombings resulted in the greatest loss of life in a single day of The Troubles. While the Ulster Volunteer Force (UVF) claimed sole responsibility in 1993 for carrying out the bomb attacks, no one has ever been charged.

O’Brien told Duffy that she’s “never heard” of the Irish Car Bomb cocktail but thinks it’s “a disgrace" and that the New York Times should apologize.

“Next month is the anniversary of the bombing in 1974 in Dublin and Monaghan," O'Brien said. "And then look at the car bombs that went off in Northern Ireland. And then we have the Ukraine war going on, and they put this in the crossword? It’s a disgrace.”

She added: “It’s hard enough to take but then you’re reading some crossword and they put in this drink called ‘car bomb’ is an absolute disgrace.”

Some of Liveline's callers on Monday, including host Duffy himself, said they'd never heard of the Irish Car Bomb, but the cocktail actually dates back to the 1970s. Charles Burke Cronin Oat, owner and bartender at the former Wilson's Saloon in Norwich, Connecticut in the US, is credited with inventing the cocktail but has since said he regrets it.

In 2016, Oat explained that he invented the "IRA" concoction - Irish whiskey dropped into Baileys Irish cream with a pint of Guinness on the side - on St. Patrick's Day 1976. The "IRA" morphed into an "Irish Car Bomb" a few years later when he had the idea to drop the Irish whiskey - Baileys shot directly into the pint of Guinness.

Diageo, the parent brand of Guinness, has previously said that it does "not seek to support drinks such as the Irish Car Bomb.”

Irish man Frank Gillespie, who owns an Irish pub in Boston, told Liveline on Monday that he has heard of the Irish Car Bomb cocktail many years ago and that he was “taken aback by it.”

Gillespie, who does not serve Irish car bombs at his Boston pub, thinks the cocktail is more popular with the younger crowd in the United States who may not understand the implications of the name.

Another Irish woman, Margaret Urwin, who campaigns with Justice for the Forgotten, pointed out that the cocktail is sometimes called a “Belfast Car Bomb."

“I think it’s mostly consumed in the United States,” Urwin said. “I think it is very offensive, very insensitive, and indeed it could be said to be racist.”

However, Urwin added: “It is absolutely very insensitive but I suppose at the end of the day it is a crossword, and we have far more serious concerns than that, than to worry about a crossword clue.”

Urwin went on to point out that it would be similar to serving a "Twin Towers" cocktail, an argument that is often used to highlight the insensitivity of the Irish Car Bomb cocktail.