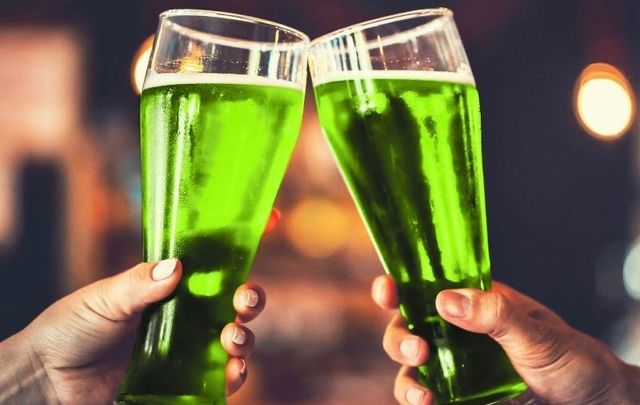 Green beer on St. Patrick's Day has been around for more than a century.

Do you know why people drink green beer on St. Patrick's Day? Although we’re pretty sure that no Irishman worth his salt would dare to have a sip of the stuff, the amazing fact is that St. Patrick’s Day’s green beer is over a century old.

In 1914, an Irish American New York City coroner named Dr. Thomas Hayes Curtin unveiled his invention of a beer the color of shamrocks at a Bronx social club.

Curtin’s family emigrated from Co Carlow when he was just five years old. He was educated in New York and earned a medical degree. By the age of 22, he was a surgeon and worked as a coroner’s physician for the Bronx.

According to Philly.com, an eyewitness said that at the green beer's great unveiling, “everything possible was green or decorated with that color and all through the banquet, Irish songs were sung and green beer was served."

"No, it wasn't a green glass, but real beer in a regular colorless glass. But the amber hue was gone from the brew and a deep green was there instead."

The report came from Charles Henry Adams, in his syndicated "New York Day By Day" column, filed one week after the unveiling.

He wrote, “All the doctor would tell inquisitive people was that the effect is brought about by one drop of wash blue in a certain quantity of beer."

The “wash blue” was also, in fact, poison, an iron powder solution used to whiten clothes.

Regardless, more than a century, green beer prevails and this Irish American’s invention continues - but now a few drops of green food coloring are used to give the beer an emerald hue, instead of the poisonous wash blue.