Irish revolutionary leader Joseph Mary Plunkett married Grace Gifford just hours before he was executed for his role in the 1916 Easter Rising. 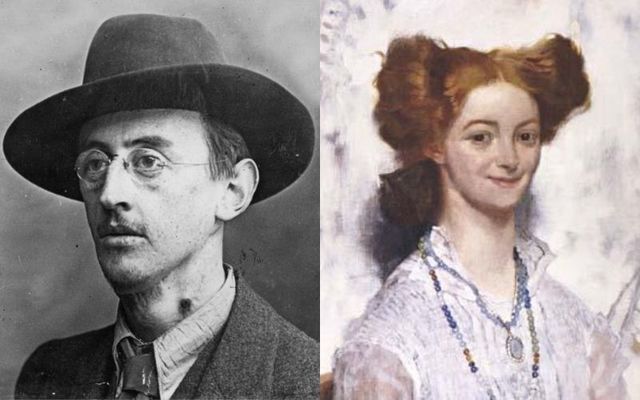 On this day in 1916, Joseph Mary Plunkett married Grace Gifford in Kilmainham Gaol just hours before his execution, giving rise to one of the most popular and beloved Irish ballads of all time.

The heartbreaking and short-lived nature of the marriage inspired Frank and Seán Meara to pen "Grace" in 1985, which immortalized the wedding.

As the Irish Republican Brotherhood's Director of Operations and one of the signatories of the Proclamation of Independence, Plunkett was sentenced to death by court-martial in aftermath of the Rising.

Plunkett and Gifford were due to be wed on Easter Sunday - one day before the beginning of the Rising - but the ceremony was postponed due to his involvement in the upcoming rebellion.

After his sentencing, Plunkett's sole concern was to marry his fiance before his untimely death, and, amazingly, the British Administration in Ireland cooperated.

Grace ensured that the wedding took place by securing all the necessary paperwork and she also bought a wedding ring from a jeweler on Grafton Street in Dublin on the day of the marriage.

She had to move quickly since she only learned of his execution date on May 3 following the executions of Patrick Pearse, Tom Clarke, and Thomas MacDonagh.

The marriage was a sordid affair, stripped of all love and romanticism.

British jailors led Grace to the Catholic chapel in Kilmainham Gaol where the couple was wed. Neither Gifford nor Plunkett were allowed to speak during the ceremony.

Their only minutes together as a married couple could hardly be described as romantic.

After the wedding, Grace was allowed to spend ten minutes in her husband's prison cell under heavy supervision.

Prison officers and British army personnel crammed into Plunkett's tiny cell while Grace looked at Plunkett as her husband for the first (and last) time.

Plunkett was executed by firing squad on the morning of May 4 along with William Pearse, Edward 'Ned' Daly, and Michael O'Hanrahan.

Grace never married again, despite being just 28 years of age at the time of her husband's execution. She died in Dublin in 1955 at the age of 67.

Frank and Seán O'Meara's gut-wrenching ballad about the marriage has ensured that the tale is familiar to almost every Irish man, woman, and child.

The O'Meara brothers wrote from Plunkett's point of view on the night of his wedding and the morning of his execution and the song details his love for Grace and his love for Ireland.

"I know it's hard for you my love to ever understand, the love I bear for these brave men, my love for this dear land."

The song also places itself in Plunkett's mind as he walked out to face the firing squad.

"On this May morn as I walk out, my thoughts will be of you."

"Grace" has proved to be one of the most popular Irish songs ever written and is arguably the best-known song from the Easter Rising, Ireland's most famous rebellion.

Numerous Irish artists have covered the ballad, but the Dubliners' Jim McCann's recording is the definitive version of the song.

McCann brings the story to life and his rendition is synonymous with the song and the story.

In recent times, Scottish rock superstar Rod Stewart has covered the song and made it a regular fixture in his Las Vegas concerts.