Erin Sands, granddaughter to Irish Republican Bobby Sands, sang a stunning rendition of "Grace" recently at a local pub in Co Down. 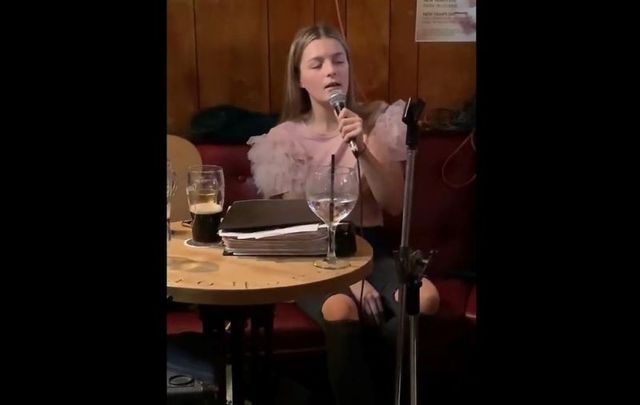 Erin Sands brought her local pub in Co Down to a standstill with her rendition of the popular Irish ballad.

Bobby Sands’ granddaughter Erin Sands brought her local pub to a standstill when she offered a stunning rendition of the popular Irish ballad “Grace” recently.

A video of her performance was shared on Facebook by Shantelle Naomi and has been receiving scores of positive comments.

Shantelle wrote: “Our own Sandsy, if anyone can sing a song like this its Bobby's own granddaughter." She wrote elsewhere that Erin performed the song in their local pub in Killough, Co Down and, not surprisingly, brought the place to a standstill.

Many people took note that Erin bears a great resemblance to her late grandfather in his younger days, and that he was likely smiling down on her.

27-year-old Bobby Sands, an Irish Republican, died on May 5, 1981 in HM Prison Maze in Lough Kesh, Co Down after he initiated a hunger strike to protest the removal of Special Category Status. Prior to his death and during his hunger strike, Sands was elected as a Member of Parliament during a by-election.

The song “Grace” was written in 1985 by Frank and Seán O'Meara having been inspired by Grace Gifford, the widow to 1916 Easter Rising leader Joseph Plunkett, who married Grace only hours before his execution at Dublin’s Kilmainham Gaol.

You can watch Erin Sands' rendition of “Grace” here:

Our own Sandsy ????? Paula Sands Gerard Sands if anyone can sing a song like this its bobbys own granddaughter ❤️❤️❤️❤️

Do you have a video you want featured on IrishCentral? Email us at Submit@IrishCentral.com!