Just before dawn on Thursday May 4, 1916 Joseph Mary Plunkett, signatory of the Irish Proclamation, was executed by the British Army in Dublin’s Kilmainham Gaol. 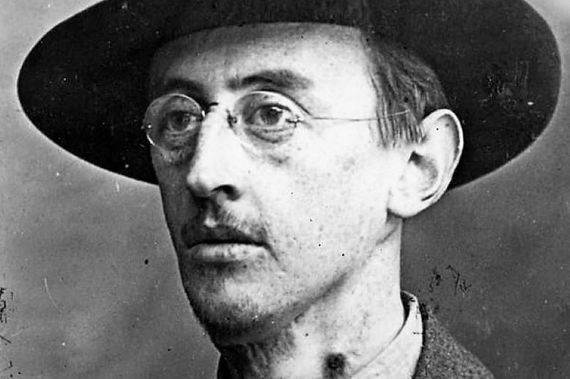 Just before dawn on Thursday, May 4, 1916, Joseph Mary Plunkett, a signatory of the Irish Proclamation, was executed by the British Army in Dublin’s Kilmainham Gaol.

Plunkett, although frail and dying of tuberculosis at the time of the insurrection, was one of the great influences behind the 1916 Easter Rising. For the previous two years, he had served as the Irish Volunteers foreign secretary, traveling to Germany to try and interest the Germans in helping with the proposed rebellion. Back in Dublin, he was one of the driving forces behind the military planning of the Rising.

Although he would share the same deadly fate as thirteen other rebel leaders in the Breaker’s Yard at Kilmainham, Plunkett is, perhaps, best known for marrying his fiancée, Grace Gifford, only hours before his execution.

Plunkett was supposed to be married in a double wedding ceremony alongside his sister and her fiancé on Easter Sunday, but could not because of the Rising. He was engaged to Grace Gifford of the politically bipolar Gifford family—half were Unionists and the other half Fenians. Fellow Proclamation signatory Thomas MacDonagh was married to Grace’s sister, Muriel Gifford.

After Joe’s sentencing, his one big concern was to marry Grace and, for once, the British cooperated. Grace did all the legwork, getting the ring from a jeweler in Grafton Street, and all the legal papers that were necessary to make it happen. The urgency of the situation made people speculate that Grace was pregnant.

Before his death sentence was pronounced, Joe sent a note to Grace in which he stated: “I have no notion what they intend to do with me but I have heard a rumour that I am to be sent to England…Listen—if I live it might be possible to get the Church to marry us by proxy—there is such a thing but it is very difficult I’m told.”

“I entered Kilmainham Jail on Wednesday, May 2nd, at 6 p.m.,” later wrote Grace, “when I saw him for the first time in the prison chapel, where the marriage was gone through and no speech allowed. He was taken back to his cell, and I left the prison….I went to bed to bed at 1:30, and was wakened at 2 o’clock by a policeman, with a letter from the prison commandant—Major Lennon—asking me to visit Joseph Plunkett. I was brought there in a motor, and saw my husband in his cell, the interview occupying ten minutes. During the interview the cell was packed with officers, and a sergeant, who kept a watch in his hand and closed the interview by saying ‘Your time is now up’.…Also, his last moments with his wife were not rendered more bearable by the presence of as many soldiers and inane officers as could be crammed into his cell—we who had never had enough time to say what we wanted to each other found that in the last ten minutes we couldn’t talk at all.”

After he received the sacraments, Plunkett said to the priest just before being shot: “Father, I am very happy. I am dying for the glory of God and the honour of Ireland.” He was shot between 4:00 and 4:30 a.m.

When news of Grace and Joseph’s wedding came out the tongues of Catholic Dublin began to feverishly wag. Of course, the big question was: “Is she pregnant?”

Joe’s sister, Geraldine Plunkett Dillon, in her autobiography All in the Blood addresses this question. “The story which went round was that she was going to have a baby but that Joe was not the father. I was told on good authority that this story was put about by Dublin Castle.”

But, indeed, Grace was pregnant, and Geraldine relates the terrible story of her miscarriage, one of the last casualties of 1916, in this first-hand account: “I went out to Larkfield to see Grace and was told that she was upstairs in bed. When I went into her bedroom I saw a large white chamberpot full of blood and foetus. She said nothing and I said nothing.”

The legacy of the Plunkett's love

The romance of Joseph and Grace is told in this haunting melody, written by Seán and Frank O’Meara in 1985. Here “Grace” is sung in stunning fashion by 11-year-old Caoimhe Mooney:

Grace went on to outlive her husband by 39 years, dying in Dublin on December 13, 1955, in the Portobello section of Dublin. She was buried with full military honors with Irish President Seán T. O’Kelly in attendance.

Grace was caught on film but once. In 1919, she made a film to help promote Michael Collins’ National Loan. In this clip, she is seen with Collins in front of Padraig Pearse’s school, St. Enda’s in Rathfarnham, buying a loan from Collins along with other prominent Republicans.