146 people lost their lives changing working conditions in New York forever. Those who rushed to help and save the factory workers were largely Irish.

Coffins of some of the 146 people who lost their lives in the Triangle Shirtwaist Factory Fire, of 1911, lie on the sidewalks. US Library of Congress.

On that fateful day in 1911, when 146 people lost their lives changing working conditions in New York forever, those who rushed to help and save the factory workers were largely Irish, writes Dermot McEvoy.

This is an excerpt from Dermot McEvoy’s new book, Real Irish New York, published by Skyhorse.

It all started on a spring day, Saturday, March 25, 1911. The Triangle Shirtwaist
Factory was located at 23–29 Washington Place in New York’s Greenwich Village, about a block east of Washington Square. It was payday and the workers, mostly Jewish and Italian women immigrants, were ready for their week to end. And their Saturday would end—in tragedy.

Triangle Shirtwaist was located on the eighth, ninth, and tenth floors of what was
known then as the Asch Building, which is still there to this day, now part of NYU.
The company made shirtwaists, which was what women’s blouses were called early in the twentieth century.

The factory was owned by a couple of Russian immigrants, Max Blanck and Isaac Harris, who had their own Horatio Alger stories but apparently had forgotten their humble roots. They liked to run things on the cheap. They were proponents of child labor, and when inspectors came by they would hide the children in a box. They also liked to save on such necessities as washrooms, closets, and toilets.

They also had a history of arson at their factories. The thing they would not allow was a union. And they played dirty. Greed was their motto.

In 1909 a strike was called, and they shut their workers out. Their “replacement
workers” were prostitutes from the Bowery who had no skills except that they could beat up women on picket duty outside the Asch Building. The Tammany Hall controlled police where no use either.

Read more: How Boss Tweed invented Tammany Hall and taught the Irish how to change America

“When the strikers fought back,” David Von Drehle wrote in Triangle: The Fire That Changed America, “the Tammany police force intervened on the side of the owners. This was Tammany’s custom. Strikers, after all, had no money, no ‘sugar,’ to pass around the station house. They added nothing to the stream of graft that powered the political machine.”

“One inspector P. J. McKeon, who lectured in fire safety at Columbia University,” wrote Terry Golway in his history of the FDNY So Others Might Live, “said that ‘the place looked dangerous to me. There was a fire escape in the back and all that,’ he said, ‘and the regulations seemed to be complied with all right, but I could see that there would be a serious panic if the girls were not instructed how to handle themselves in case of a fire. I even found that the door to the main stairway was usually kept locked. I was told this was done because it was difficult to keep track of so many girls.’”

It is believed that a carelessly discarded match or cigarette butt set off pieces of
scrap cloth and started the fire on the eighth floor. Cotton cloth is very combustible and when you added the tissue paper used and the wooden tables, the fire had all the ingredients it needed. Most of the workers on the eighth floor escaped as the floor soon filled with smoke, but their compatriots on the ninth and tenth floors were not as lucky. Many escaped to the roof, where NYU law students from the adjacent building found ladders which they dropped down to save them. In the most ironic way, it was lucky the fire was on a Saturday, the Jewish sabbath, or the death toll would have been much higher. 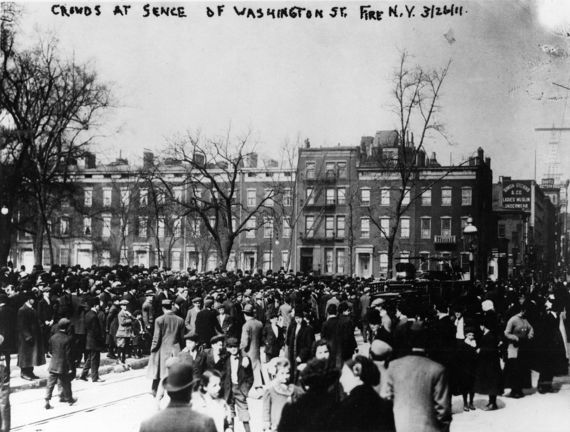 Crowds gather to mourn the 146 killed in the Shirtwaist Factory Fire, New York.

Irish New York to the rescue

And the first heroes on the scene were Irish. Passerby John Mooney saw the fire and pulled fire alarm box #289, which alerted the fire department’s chief dispatcher, a man named Daniel Donahue. The first responders included a mounted cop on patrol, James Meehan, who saw the fire and rushed into the building. He ran up the stairs and directed the women out. On his way down, he forced open a locked door and freed many women escaping from the eighth floor. Within ninety seconds, the FDNY was on the scene. Engine Company 72 was the first to arrive with its contingent of Irish firefighters— Oliver Mahoney, Bernard McKenny, John McNulty, and Thomas Foley.

They immediately fought their way into the Asch Building. Engine 72 was soon joined by Engine Company 18, rushing over from West 10th Street, only blocks away.

The fire quickly spread north above the eighth floor and soon New Yorkers would
witness something that would not happen again for another ninety years until the
World Trade Center was attacked on 9/11—bodies becoming human missiles as women flung themselves out of windows from the top two floors. Firefighters and police kept victims of the fire in the building on the ground floor because they feared they would be killed by the falling bodies. Elevator operator Joseph Zito made repeated trips up and down to bring the deceased victims, packed over each other, down.

Everyone awaited the arrival of the Hook & Ladder companies. Their regular ladders would be thirty feet short of reaching even the eighth floor, but maybe their scaling ladders could save them. Scaling ladders, according to Golway, “looked like a homely cousin to the FDNY’s larger and sturdier equipment. Firemen could extend their vertical reach by carrying this small ladder, which varied in height from 15 to 20 feet to the top of their regular ladders. Consisting of a series of small rungs attached to a single central upright, its modest size and weight made it mobile, and that was the genius of it. The fireman positioned the scaling ladder so that it attached by a hook to a higher windowsill. It required a straight climb up and a straight descent—the scaling ladder wasn’t fixed at an angle like regular ladders.”

“Firefighters,” wrote Golway, “including the veteran pioneer of the scaling ladder,
John Binns, arrived within six or seven minutes of the fire’s outbreak, but the fire
spread with such speed and intensity that several victims already had jumped to their deaths as a growing crowd of horrified passersby looked on helplessly. Firefighters found their mangled bodies lying on the sidewalk. Above them, young women and a few men pleaded for help from windows and ledges.”

The FDNY began to utilize life nets to try and catch the jumpers. David Von
Drehle in Triangle relied on the work of William Gunn Shepherd, a young reporter
for the United Press. Shepherd observed that “One girl tried to keep her body upright. Until the very instant she touched the sidewalk, she was trying to balance herself.”

“Ladders were deployed quickly,” wrote Golway, “but they reached only to the
sixth floor. A young woman in a ninth-floor window, her skirt on fire, leaped for one of the ladders. She missed, and she fell to her death. Scaling ladders were brought out to reach to the upper floors, but by the time they were in place, the carnage was over.

Those who dared had already leaped to their deaths. Those who couldn’t were dead inside the building. Only about fifteen minutes passed between the death of the first jumper and the end of hope when no more faces appeared in the windows.”

Then there was the case of the gentleman jumper who, in an odd way, helped the
women as they prepared to leap. “He held out a second girl in the same way,” said
Shepherd, “then let her drop. Then he held out a third girl. They didn’t resist.” He
kissed the next girl in line. Was it his sweetheart? “Then he held her out into space,” continued Shepherd, “and dropped her. But, quick as a flash, he was on the windowsill himself. His coat flattered upward; the air filled his trouser legs; I could see that he wore tan shoes and hose. His hat remained on his head.” When he landed, Shepherd inspected him. “I saw his face before they covered it. You could see he was a real man. He had done his best.”

“A young firefighter with Engine Co. 18,” wrote Golway, “recalled that the first
thing he saw, as his engine pulled up to the scene ‘was a man’s body coming crashing down. . . . We turned into Greene Street and began to stretch in our hoses. The bodies were hitting all around us.’”

With the heat of the fire on them, a mass exodus began from the windows as Shepherd looked on in horror. “Girls were burning to death before our eyes,” he wrote.

“There were jams in the windows. No one was lucky enough to be able to jump, it
seemed. But one by one the jams broke. Down came bodies in a shower, burning,
smoking, lighted bodies, with the disheveled hair of the girls trailing upward. . . .
There were thirty-three in that shower.”

The fire was brought under control within an hour. Now the gruesome work
began. The FDNY had to rig block-and-tackles to remove the bodies from the building.

It would be midnight before every corpse was removed. The final count was 146
souls, 123 of them women.

The Triangle Fire led to new labor laws in the New York State legislature spurred on by Tammany Hall leader “Silent” Charlie Murphy and his acolyte, an Irish mutt named Al Smith. With the advent of the Great Depression, this legislation would inspire Franklin D. Roosevelt’s New Deal.

Read more about it in Real Irish New York which is available in hardcover and Kindle from Amazon.com.

* Dermot McEvoy is the author of the recently published Real Irish New York: A Rogue’s Gallery of Fenians, Tough Women, Holy Men, Blasphemers, Jesters, and  a Gang of Other Colorful Characters. He is also the author of The 13th Apostle: A Novel of Michael Collins and the Irish Uprising and Our Lady of Greenwich Village, both now available in paperback, Kindle and Audio from Skyhorse Publishing. He may be reached at dermotmcevoy50@gmail.com. Follow him at www.dermotmcevoy.com. Follow The 13th Apostle on Facebook at https://www.facebook.com/13thApostleMcEvoy/

Here's a short video from History.com on the tragedy:

Do you know a proud first responder in New York or elsewhere? Share this and thank them for their service.