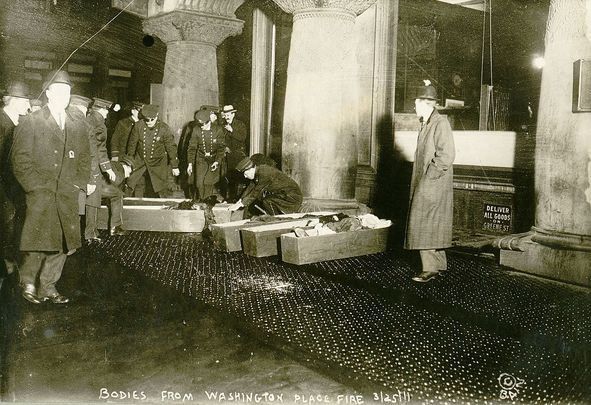 Coffins of some of the 146 people who lost their lives in the Triangle Shirtwaist Factory Fire, of 1911, lie on the sidewalks Library of Congress

The Irish History Podcast explores the events of the Triangle Shirtwaist Factory fire ahead of the 110th anniversary, on March 25, 1911. This was one of the deadliest workplace disasters in American history.

Irish History Podcast host Fin Dwyer teamed up with New York-based historical fiction author Hope C. Tarr to produce the riveting three-part series that focuses on everything from immigrant life at the turn of the 20th century in New York to the impact the fire had on workplace safety in the US.

The series explores the events leading up to the tragic fire that claimed the lives of 146 people and maimed 78 others, while it also explores the public reaction in the immediate aftermath of the tragedy on March 25,  1911.

The series tells the story of the tragic fire through the stories of Irish immigrant Annie Doherty and Polish immigrant Celia Walker, who both survived the blaze in Greenwich Village.

Tarr, who has done extensive research on the Triangle Fire, told IrishCentral that the podcast creators wanted to add a human element to the series by focusing on the stories of Doherty and Walker.

"I think there's been a lot done on this fire throughout the years, but when you shoot out these statistics it becomes a blur. When you make people realize that these people were someone's daughter or sister or auntie, I think it really makes it more real," Tarr told IrishCentral.

The first episode of the gripping series explores immigrant life in New York through Walker and Doherty, examining the Irish immigrant community that had settled in Hell's Kitchen on the Upper West Side.

"It was an avenue of opportunity for Irish people who were trying to make a new life, but the communities were very segregated," Tarr said. "The real point of intersection for these people was the shop floor. It wasn't the place of worship, it was the factory floor where these diverse communities intersected and found common ground."

Doherty and Walker came from contrasting immigrant backgrounds; Doherty emigrated from a small village in Donegal as an adult and retained her Irish accent as a result, while Walker moved to America at a young age and was almost indistinguishable from a "real Yankee".

Tarr said that this difference allowed Walker to earn better pay at the Shirtwaist Factory due to a prejudice against working-class immigrant workers.

"The ability to rise up and earn more within the pecking order of these factories was predicated on how Americanized you were," she said.

Workers at the factory were discriminated against purely because they were poor immigrants, Tarr said, and this mistrust and mistreatment of immigrant workers ultimately led to such a high death toll in the tragic fire.

"Most workers were on the ninth floor - the death floor as it's known - were locked in or they couldn't access the stairwells because of the fire or they were trying to cram into the one elevator that was operational."

The second episode of the three-part series focuses on the events of March 25, 1911, through the stories of Doherty and Walker, detailing how negligent workplace safety standards contributed heavily to the tragedy.

Tarr pointed to a prescient garment workers strike in 1909 when immigrant factory workers campaigned for fire safety drills and unobstructed fire exits. Their demands were ignored with disastrous consequences, resulting in the deadliest workplace disaster in American history prior to 9/11.

"It was not just a terrible tragedy, it was a preventable tragedy. I don't think anyone argues that it was anything less than incredible owner negligence."

However, company owners  Max Blanck and Isaac Harris were acquitted of all criminal negligence charges and re-opened their factory at Irving Place just three days after the disaster.

"The two men who owned this chain of garment factories were themselves Russian immigrants and you would think that they would have more compassion for their workers, but they didn't."

Nevertheless, Tarr said that history has vindicated the victims of the Triangle fire by vilifying Blanck and Harris.

"Even though the women and girls who died were not vindicated at the time, history has vindicated them. That is really comforting to note - sometimes we don't get immediate justice in the moment, but history has a pretty keen eye."

The final episode of the Irish History Podcast series, meanwhile, explores the aftermath and legacy of the fire, examining how the immigrant community reacted to the disaster.

Dwyer and Tarr explore how a number of predominately Irish institutions, including the Democratic machine at Tammany Hall, rallied around the workers at the Shirtwaist Factory in their pursuit of justice and reform, while a largely Irish police force rushed to save victims from the burning Asch Building.

"You see these Irish and Irish-Americans taking up the banner of workplace justice and reform after this fire and really leading the charge and making meaningful lasting reforms that we still enjoy today," Tarr said.

The podcast also explores how the drive for change was largely driven by women, who advocated for reforms that would become standard practice in American factories over the next century.

Click here to listen to the three-part series from Irish History Podcast.