Historic facts about Irish pubs you may not have heard of

Local pubs were once used to store dead bodies. 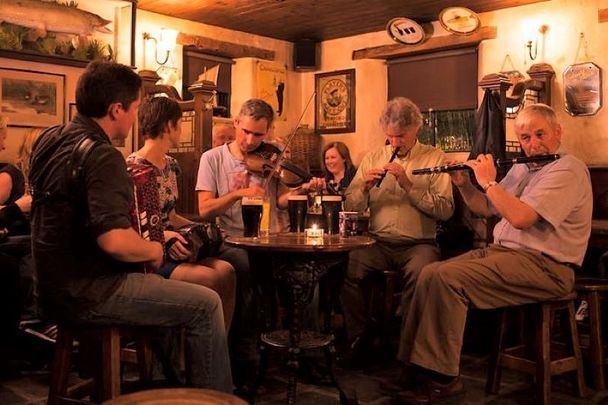 Did you know pubs were once used to store dead bodies? Or that is was illegal to drink on St. Patrick's Day?

Here are some little known facts about pubs, according to Kevin Martin's book "Have Ye No Homes To Go To? The History of the Irish Pub."

Ancient Irish law decreed that pubs had to be open 24-hours.

Under Brehon Law, local kings were required to have their own bruigu/brughaid, or brewer, who was obliged to have “a never-dry cauldron, a dwelling on a public road and a welcome to every face."

The bruidean, which had to be located at a crossroads, was expected to provide hospitality to anyone who came through the doors and had to stay open 24 hours a day.

The oldest pub in Ireland and the pub with the oldest graffiti.

After many years of dispute, the owners of Sean’s Bar in Athlone, Co Westmeath, and The Brazen Head in Dublin went on national radio to determine which of their establishments was the oldest pub in Ireland.

Sean's Bar provided strong evidence that suggested the presence of a retail premises on the site dating back to AD900, which was verified by archaeologists and historians.

The Brazen Head, which had no such evidence and was forced to admit defeat, may have taken some consolation when a signature etched on one of their windows was confirmed to be from 1726.

The tiny writing reads: “John Langan halted here 7th August 1726”.  It was awarded the title of the oldest piece of graffiti in the country.

In the 12th century, Normans, who were great wine lovers, invaded parts of Ireland. They imported wines which were initially managed by wine merchants, or vinters, and delivered to the cellars of the Norman lords' castles.  Wine tasting events were held occasionally and eventually they began selling the surplus wine locally.

Taverns, from the Latin word taberna, came into existence as meeting places where alcohol and food were served.

Dublin’s Winetavern Street (vicus tabernariorum vini in Latin, meaning “the street of the wine taverners’”) was the main center of distribution and retail.

Pubs were often used as temporary storage places, or even morgues, for dead bodies. In fact, the Coroners Act of 1846 decreed a dead body had to be brought to the nearest public house for storage until further arrangements could be made.

Beer cellars were cool and slowed the decomposition of the bodies. It was even common for publicans to have marble tables in their cellars for autopsies. This legislation stayed on the books until 1962.

The reason why Irish pubs have family names over the doors.

After legislation passed in 1872, it became a legal requirement to display the owner's name over the front door of a pub. The legacy of this law became something of a tradition and remains one of the unique features of the Irish pub.

Unfortunately, the change in legislation resulted in a decline in the number of colorful and inventive pub names across the country.

Travelers used to be legally entitled to a drink.

A law from the days of coach travel allowed that travelers who were three miles from home could drink alcohol, or refreshment, outside normal hours. In Dublin city, the limit extended to five miles.

However, the customer had to have "traveled in good faith" and not just for the purpose of having a drink. Many pubs took advantage of the law to stay open longer hours until the law changed in 1943, with the widespread use of cars.

It used to be illegal to drink on St Patrick's Day.

But in Ireland, the holiday, which falls during the season of Lent, was once a day of abstinence and the only place alcohol was sold was in the members’ lounge at the Royal Dublin Dog Show.

Irish people were not allowed to buy a drink on the day until the law changed in 1973.

However, today St Patrick’s Day now sees over 13 million pints of Guinness being sold around the world, four times the amount sold on an average day.