LISTEN: The most requested songs in Irish pubs

The Irish everywhere love a singalong, especially in a warm Irish pub as night draws on. 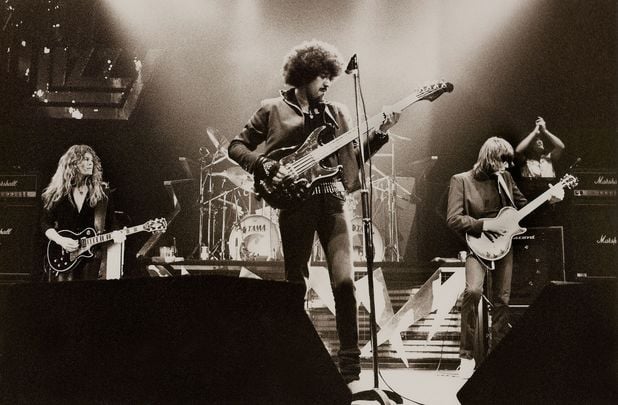 Thin Lizzy's Whiskey in the Jar is still one of the most popular Irish tunes.

The Irish everywhere love a singalong, especially in a warm Irish pub as the night draws on. There are some eternally popular Irish songs requested.

It's a poor performer that can’t handle a tune or two included here!

Here is our list of great songs, with great stories, sung by great musicians:

"Whiskey In the Jar"

Set in the mountains of Cork/Kerry and Fenit, County Kerry this song tells the tale of a highwayman who is betrayed by his wife or lover. This tune has been recorded by various artists since the 1950s including The Dubliners and probably most famously, Thin Lizzy. In 1998, it was recorded by heavy metal band Metallica.

The origin of this song is contested. Professor T. M. Devine has said the song is about temperance. He believes it was adopted in Scotland by the Americans who used it in the Temperance movement. Although nowadays it has a much stronger connection to Irish pubs and drinking.

Another theory is that it was part of a collection of ballads from between 1813 and 1838 that were held in the Bodleian Library.

This song tells the tale of a man traveling from his home in Tuam, County Galway, to Liverpool. The song was partially recited several times in James Joyce’s “Ulysses” by Mr Deasey.

Mursheen Durkin is the story of an emigrant from Ireland traveling to mine for gold in California during the Gold Rush.

Dated from the 1850s and the music-hall tradition of comical songs, "Finnegan's Wake" is one of The Dubliners better know songs. The Clancy Brothers have also recorded it, as have the more recent Dropkick Murphys.

>Molly Malone is the official anthem of Dublin City. So much so that there is a statue of Molly at the end of Grafton Street in the city center and June 13 is Molly Malone Day.

This song was printed in a collection of songs called “Irish Street Ballads” in 1916. It is about the intoxicating properties of Irish moonshine, Poitín. It was first recorded in New York in 1927.

Most famously, it is referenced in The Pogues “Fairytale of New York”:

“And then he sang a song,
The Rare Auld Mountain Dew”

This tune, sometimes called “The Whistling Gypsy,” has a blurred history but was eventually copyrighted by Dublin songwriter, Leo Maguire around 1950. In the past, it has been recorded by The Clancy Brothers, The Kingston Trio, The Highwaymen (who had a Top 40 hit with the song), Elton Hayes, The Seekers, The Wiggles, Carmel Quinn and Glenn Yarbrough.

"Lanigan's Ball" is often used as a metaphor to describe a situation that has gone horribly awry. The song tells the story of a party that is thrown for a specific young man’s recently passed father. There is a suggestion in the song that the party is being thrown so that the young man can show off his dancing skills. There is drinking at the party and someone steps out of line causing one of the guests to be insulted. A “ruckus” breaks out and a musician and instrument are injured.

What songs would be on your top Irish songs list?