Joyce could hardly have imagined the popularity of his novel "Ulysses" celebrated throughout the world this June 16. 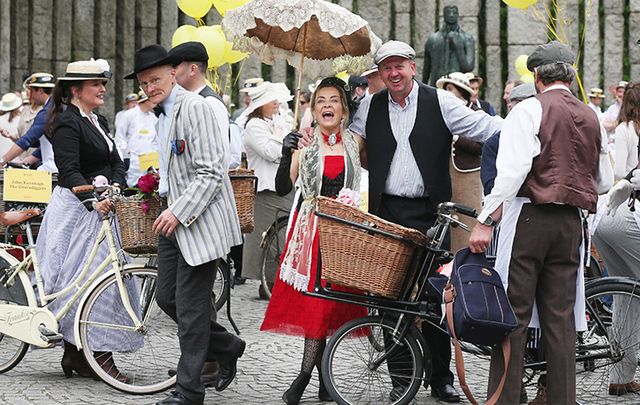 A celebration of all things Joyce on Bloomsday in Dublin. Photocall

From Dublin to Dubai and Cork to Caracas, there will be Bloomsday readings, with Dublin itself becoming the focus of a major new international trend to honor Joyce’s memory.

Yet, it is the celebration of a book that is difficult, complex, and has been read by only a fraction of the millions who have claimed to have done so.

But unlike many works of art, this is no obscure and deliberately difficult work lacking any real merit except to academics who delight in its difficulty.

The story of Leopold Bloom and his wanderings around Dublin on one 24-hour odyssey is a tale full of obscure references, nonsequiturs, blind alleys, and genuinely beautiful and passionate language.

Many reject it as too obscure, yet Molly Bloom’s parting remarks at the very end of the book stand as one of the English language’s greatest.

Molly Bloom is the concert singer who married the advertising agent Bloom, and their marriage has not been consummated for about 10 years. She has taken a lover, Blazes Boylan, but still loves Leopold.

She reminisces about her night with him when he proposed, back when love was young and life was full of promise:

"...I was a flower of the mountain yes when I put the rose in my hair like the Andalusian girls used or shall I wear a red yes and how he kissed me under the Moorish wall and I thought well as well him as another, and then I asked him with my eyes to ask again yes and then he asked me would I yes to say yes my mountain flower and first I put my arms around him yes and drew him down to me so he could feel my breasts all perfume yes and his heart was going like mad and yes I said yes I will Yes.”

Many years ago the legendary Irish actress Siobhan McKenna recited the entire monologue, giving one of the greatest theatrical experiences ever.

Though long past her prime, McKenna delivered the sexiest rendition imaginable on stage.  Fionnuala Flanagan is another Irish actress who can make the words of Molly Bloom dance.

Joyce never lived to see the full flowering of his masterpiece and it is hard to know what he would have made of it.

He had his own Molly Bloom in his wife and lifelong lover Nora Barnacle, and many hear her voice in the plaintive pleading of Molly to have her sexuality understood and nurtured.

The book is set on June 16, 1904, the day Joyce first met Barnacle outside the hotel where she was a chambermaid. Their love affair would last until his death in 1941, although they only got married in 1931.  His book would long outlast them both.

Around the world these days there are thousands of Joycean scholars who make their living parsing and reparsing the great man who, perhaps much to his chagrin, if he were alive, has become a symbol of all things Irish to millions.

So celebrate this Bloomsday and if nothing else, read some of Molly’s soliloquy. It is there that the greatness of Joyce can be seen and the celebration of his masterwork is well deserved.