James Joyce once revealed in a letter how the press waited at his doorstep and tried to blackmail him in the wake of his 1931 marriage. 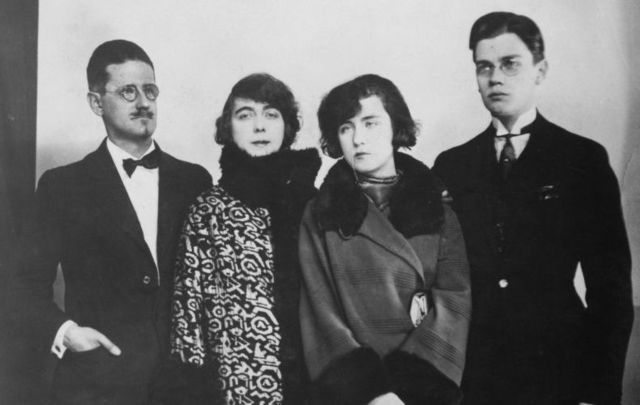 There isn’t much to connect legendary Irish writer James Joyce with some of today's favorite paparazzi targets but in his day, Joyce complained of being hounded by the press and “feeling under siege like a hostage” due to reporters waiting at his doorstep.

In a letter to his son Giorgio dated July 9, 1931, Joyce shared his dismay at the media’s obsession, once news leaked of his later-in-life wedding to his Galway love, Nora Barnacle.

The four-page letter was one among a collection bequeathed to the Zurich James Joyce foundation by Joyce’s step-grandson, Professor Hans Jahnke, who passed away in 2010. The collection was been digitally published for the first time in the summer of 2014 by the National Library of Ireland.

In 1931, Joyce and Barnacle were living in the Campden Grove area of Kensington in London. They had been living together as man and wife for almost 27 years and had raised their two children, Giorgio and Lucia. They legally wed in a civil ceremony for, as Joyce put it, “testamentary reasons,” so that Giorgio and Lucia would be his heirs in the eyes of the law. "Ulysses" had been published nine years earlier, and at this point, the novel and its author were internationally known.

Joyce tried to keep news of the civil ceremony as secret as possible by waiting until two days beforehand to apply for the marriage license and by declining to fill in the spaces for his birthplace or profession.

In a letter to Giorgio and his American wife, Helen, written a few days before the ceremony, Joyce expressed an amused excitement.

“The marriage has been arranged for Saturday, July 4 (my father's birthday and the birthday of my brother George to say nothing of American independence) at the hour of 11.15 am Greenwich time," he wrote.

"To throw people off the scent the bride will wear her lifeguard uniform while the groom will be in green satin with a white veil and an orange umbrella," the colors of the Irish flag.

He wryly counseled: "Try to look as natural as possible so that people meeting you may not perceive that you have been turned into honest citizens all of a sudden."

His tone changed decidedly once the media became involved. As RTÉ reports, after Joyce applied for the license, his name caught the eye of a Press Association reporter going through the advance notices at the Kensington Register Office. Once news spread, Joyce and Nora were hounded by reporters.

The first encounter was between Joyce and a PA reporter who stopped the author on his way home to get “a statement as to why, if I married N. B. in 1904, I was etc. etc.”

Joyce, who writes that he was eating a sweet at that moment, said that he kept eating in order to buy himself more time and invited the reporter back to his residence, where he called his lawyer. The reporter would only leave once Joyce assured him that he would issue a statement through his lawyer later that night.

The statement read that they were marrying for “testamentary reasons” because their first (invented) wedding in Austria in 1904 had been discovered as invalid since Nora had given a false name. The press did not entirely buy it, however, and continued to pursue the couple.

When Joyce and Nora came back home at midnight from a later supper, a reporter was camped out on their doorstep.

On the day of the wedding, a reporter from The Express gained access to their house by pretending to be a distant acquaintance. After being turned away by Joyce a first time, the man returned with a letter from his editor, which Joyce describes in the letter to Giorgio as “pure blackmail.”

“They offered me half of the middle page if I would write an article for the next day on Modern Marriage and Free Love and he gave me to understand that if I did I would be well paid and if I did not the paper would hold itself free to deal with my 'double marriage' as it pleased," he wrote.

Still, it seems that Joyce was perfectly capable of handling the situation.

"I told him to inform his editor that I did not write for the Press and did not read it either, but that my solicitor would read with the proper attention anything they might publish. The Express came out next day without one word.”