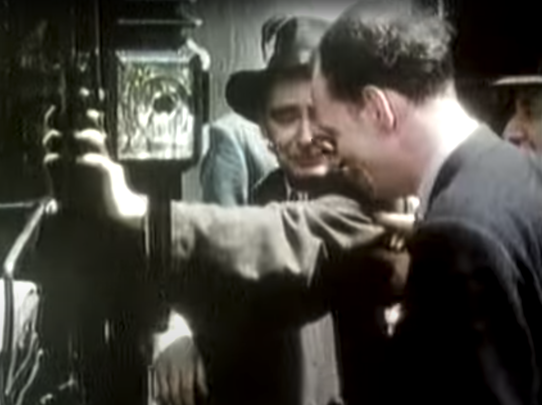 The 1954 Bloomsday celebration was a bit of a messy affair. YouTube

Bloomsday may have been celebrated by some as far back as the 1920s, but it wasn’t until 1954, when Dublin’s literati of the day took to the cobblestones, that the event began to come into its own.

Celebrating the 50th anniversary of the fictional events of June 16, 1904, the date on which "Ulysses" is set, the great Irish comedic writer Brian O’Nolan, otherwise known under his pen names Flann O’Brien or Myles na gCopaleen; County Monaghan poet Patrick Kavanagh; a young critic named Anthony Cronin; A.J. Leventhal, the Registrar of Trinity College; and artist,  publisher, and publican John Ryan were joined by a dentist cousin of Joyce’s, Tom Joyce, to embark on a pilgrimage of all the Dublin sites named in the epic novel.

The excursion didn’t exactly go to plan, mainly thanks to the amount of alcohol consumed, a common enough occurrence with these sorts of things.

Luckily, the group's own legendary journey was informally captured by Ryan, the organizer of the tour, whose own pub ended up being the last port of call.

The footage shows an extremely drunk O’Nolan being given a boost up into a cab and this was only the start of the day!

According to Peter Costello and Peter van de Kamp, authors of “Flann O’Brien: An Illustrated Biography,” O’Nolan was “unsurprisingly” drunk before the group even gathered at the home of architect Michael Scott, which remains just below the Martello Tower where the opening scenes of "Ulysses" take place.

Having started drinking as early as 8:00 in the morning in the area around Cattle Market, as was his habit, O’Nolan landed at the house already in full celebration mode and decided, with Kavanagh, that they should, of course, climb up the Martello Tower. This was before the poet Kavanagh and the Irish Times columnist O'Nolan looked like coming to blows, however, and they were quickly brought away by the others, “fearful that O’Nolan would be kicked in the face by the poet’s enormous farmer’s boot,” Costello and van de Kamp wrote.

Having rented two old-fashioned horse-drawn cabs, much like those that took Bloom and his friends to poor Paddy Dignam’s funeral in "Ulysses," the group took on the identities of various characters in the book: Cronin was Stephen Dedalus; O’Nolan, his father; Ryan stood in for the journalist Martin Cunningham; while Leventhal, being Jewish, was to play the part of Bloom (although it is reported he did not know this).

Despite aiming to finish off the night in the historic remnants of the Dublin red-light district, or “Nighttown” as it was known to Joyce, the long periods spent in pubs in Sandycove and in the city center got the better of the Bloomsday revelers and it was at the literary pub John Ryan ran on Duke Street named the Bailey that they called it quits, deciding to enjoy their further pints in peace without the fuss of moving along to a different place.