Seán’s Bar in Athlone, Co. Westmeath, is one of the oldest pubs in the world. 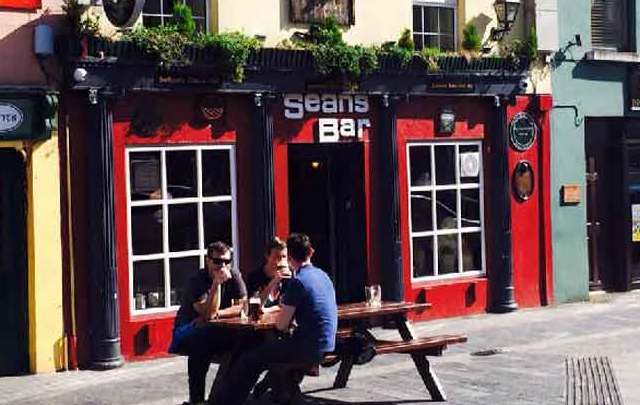 Seán’s Bar in Athlone, Co. Westmeath, is one of the oldest pubs in the world. Facebook

The oldest pub in Ireland? Head to Seán's in Athlone for a top-quality, historic pub.

If there’s one thing the Irish do well it’s a cozy pub, and why wouldn’t we hold that special talent when we’ve had over a millennium to crack the perfect pub code.

In 2014, Seán’s Bar beat off competition from the oldest pub in Britain, the Bingley Arms in Bardsey, North Leeds, with an opening date of 953 AD that just didn't make the mark.

Not happy with just conquering Europe, the pub, which is situated at the heart of Ireland, on the banks of Ireland’s longest river, the River Shannon, is also in the process of discovering if it could, in fact, be the oldest bar in the world!

Many a famous face has taken a sup in the pub, with everyone from U2 to infamous TV villain JR Ewing (actor Larry Hagman) spending a time propping up its bar.

The pub is open to all, however, and it has been a massive tourist attraction over the years with busloads of American tourists cramming themselves into its old-fashioned and relatively unchanged interior.

Those stepping inside Seán’s feel like they’re stepping back in time as the walls are graced with the photos of all the other visitors who have stepped over the threshold in centuries past.

The pub’s owner Paul Donovan told the Irish Mirror in 2017, “Anyone could drop in here at any time.

“You never know who you might meet in Sean’s.”

Paul and his brother Tim acquired the pub in 2000 when they took over from previous owner Sean Fitzsimons who had managed the bar since 1970.

The pub puts its history proudly on display, even showcasing a small section of the wall beneath the plaster to allow visitors to take in its amazing “wattle and wicker” structure.

The wattle with which the walls are built dates back to the 9th century and were a common feature in construction right up until the 13th century, going some way to prove the pub’s age.

The wattle was discovered during renovations in 1970, along with several old coins which are now on display in Ireland’s National Museum in Dublin.

In researching the history of the pub, it was discovered that the first tavern-keeper may have been a man named Luan who set up the site as a trading post in 900 AD. Said Luan may also be the man who gave his name to the town itself, as the Irish for Athlone is Baile Átha Luain literally translated as the “forted town of Luan.”

For any visitors who think that they might have had one too many Guinness when they get up to leave, it might not just be you: Luan is believed to have built the floor of the building at a slightly sloped angle due to the proximity of the pub to the Shannon. The floor is sloped towards the river allowing for any rainwater coming into drain away to the street outside.

“We can’t touch the floor, because it is a protected structure,” Paul said, “so we put a new bed of sawdust down every day to ensure it is not slippy in the event of heavy rain.”

The National Museum is currently aiming to prove that Seán’s is the oldest pub in the world, a quest that may take up to four years.

“We’re applying for that world title at the moment and we’re confident we will get it as everything is already certified in terms of its history and the time it dates back to,” Paul confirmed.

“The Americans love it for its authenticity and people can literally arrive in here by car, bus, bike or by boat.

“Everyone is interested in everyone else here and complete strangers seem to find it very easy to chat away with other visitors.”

Have you ever visited Seán's? Let us know in the comments section, below.