The most dangerous book in Ireland

'Facts and Figures of the Belfast Pogrom 1920-1922' was pulped before it was ever distributed - but several copies were rescued. 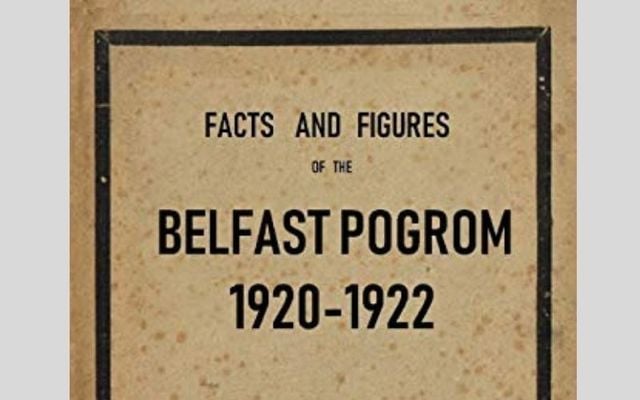 Imagine a book considered to be so dangerous that it was pulped before it could even be distributed.

Well, that is what happened in Dublin in 1922. Eighteen copies of the book did manage to escape the destruction but it still took until 1997 before it was published.

So what was the book and why was it so dangerous?

The book is 'Facts and Figures of the Belfast Pogrom 1920-1922' by G.B. Kenna and. As the name suggests it was an account of violence in Belfast during Ireland's War of Independence, including lists of fatalities and individuals wounded during 1920-1922 in Belfast (also making it invaluable for family history research).

Belfast had witnessed the large-scale expulsion of Catholics from their workplaces and districts where they were a small minority and violent attacks on isolated Catholic populations. Many of the eye-witnesses reported the active role of unionist politicians and the involvement of the temporary police force known as Special Constables. At the time, eye-witnesses saw these events as similar to violence that had occurred elsewhere and described them as 'pogroms'.

Of Belfast's four daily newspapers, three (Belfast Newsletter, Belfast Telegraph, and Northern Whig) overtly supported maintaining the union with Britain. Carefully worded accounts of the violence in those Belfast newspapers and openly misleading accounts circulated by the British press and press agencies in the United States and elsewhere presented the violence as emanating from Catholics and the Irish Republican Army (IRA). Accounts of the violence were forwarded to Dublin by the IRA and others, like Fr John Hassan, the administrator of the Catholic parish of St Marys, in Chapel Lane in the center of Belfast. As these accounts didn't agree with the newspaper reports, they were believed to be exaggerated.

When the Anglo-Irish treaty was signed in December 1921, divisions over whether to support the treaty and the (temporary) partition of Ireland meant that pro-treaty leaders like Michael Collins and Arthur Griffiths now paid closer attention to the communications coming from IRA units in Belfast (which the treaty proposed to leave as the part of Ireland under unionist control).

Collins then sent another Cork man, Patrick O'Driscoll, on a fact-finding mission to Belfast. Acting on behalf of Collins' Provisional Government in Dublin, O'Driscoll reported that the information about the pogrom was true. Collins then asked the local Catholic Bishop, Joseph MacRory, to release Fr Hassan to work on gathering suitable material for a book. Fr Hassan, however, told O’Driscoll that he personally didn’t feel up to the task of writing a book on the subject.

In April 1922, Collins then entrusted the task to Alfred O’Rahilly, a noted mathematician, theologian and Registrar of University College Cork. O'Rahilly had been the constitutional advisor to the Anglo-Irish treaty delegation in 1921, had helped draft a constitution for the new 'Irish Free State,' and was very much a Catholic intellectual, having initially trained as a Jesuit. O’Driscoll reported that Fr Hassan would gather the material and then O’Rahilly would write 'one of the most powerful indictments' of the unionists ever published.

Between April and June 1922, O'Rahilly wrote an outline, although he was mainly occupied by university business. By then, the treaty had become increasingly contentious in both Dublin and Belfast.

By early June, Fr Hassan had completed his research but O'Rahilly remained unavailable. That month, a civil war between the IRA and Provisional Government erupted in Dublin over the treaty. Fighting interspersed with attempts to broker talks during July meant O'Rahilly was still too busy to write the book.

On 2 August 1922, Collins and the northern IRA units agreed to discontinue offensive operations and stay out of the civil war. The agreement included refusing to recognize the authority of the unionist government and a passive resistance strategy. The Provisional Government would also publish a book about the Belfast violence.

It was agreed that Fr Hassan would use his research for a book which O'Rahilly would follow with his own work. Thus, 'Facts and Figures of the Belfast Pogrom 1920-1922' then went to the printers with Fr Hassan adopting the pen name 'G.B. Kenna' and using 'O'Connell Publishing Company, Dublin' as the publisher name (the only company of this name in the early 20th century was based in New York).

On 9 August, another member of the Provisional Government, Ernest Blythe, proposed the exact opposite strategy - compelling Catholics in the north (and the IRA) to accept the authority of the unionist government in Belfast and specifically that "The 'Outrage' propaganda should be dropped..." (meaning Fr Hassan's book). As far as Blythe was concerned, the plight of northern Catholics was generating support for the IRA in the civil war and revelations about the truth of the violence since 1920 would undermine the Provisional Government's prosecution of the civil war. Blythe's opinion was significant on this issue as he was originally from just outside Belfast.

On 19 August 1922, the Provisional Government voted in favor of Blythe's proposal. Collins was unable to intervene before he was shot dead in an ambush three days later.

With Blythe's proposal approved and Collins dead, 'Facts and Figures of the Belfast Pogrom 1920-1922' was pulled from the printers and pulped. Fr Hassan managed to retrieve eighteen copies which he quietly distributed to various public figures to discretely use for reference. Strict silence was maintained about the whole story.

When I was at school in Belfast in the 1980s and early 1990s, the book was mythical. Those who knew of its existence believed (erroneously) that it had been banned at the behest of the hierarchy of the Catholic Church in Ireland. When some of the eighteen surviving copies came into the public domain in the 1990s, one was used to finally publish the book in Belfast in 1997.

Fr Hassan returned to his parish in Belfast. In the late 1920s, he moved to another parish in north Antrim, at Ballymoney, where he died and was buried in 1939.

Blythe was to become Minister of Finance and actively supported reprisal executions during the civil war. He retired from front line politics in the mid-1930s. In the 1940s he was an active supporter of the fascist and anti-semitic Ailtirí na hAiséirghe party and a controversial director of the Abbey Theatre in Dublin. He died in 1972.

While publication of the book in 1922 was potentially explosive, it may actually have provided an opportunity for an informed public debate on the Belfast violence and possibly even caused those involved in the civil war in the south to pause for a moment. Fr Hassan had included details of discrimination against Catholics, accounts of violence, misinformation, and propaganda. Almost identical research and complaints had to be written again in the 1960s in a sad reflection of the long term impact of banning the book (and the failure to seize the moment and find a way to deal with the legacies of violence in the 1920s).

And, of course, violence is only ever instigated by a small minority of any population. Fr Hassan made this abundantly clear in his dedication of the volume: “The many Ulster Protestants, who have always lived in peace and friendliness with their Catholic neighbors, this little book dealing with the acts of their misguided co-religionists, is affectionately dedicated.”

The events surrounding the banning of the are recounted in Kieron Glennon’s 'From Pogrom to Civil War' (Mercier Press). The details of Alfred O'Rahilly's involvement are taken from J. Anthony Gaughan’s biography of O’Rahilly published by Kingdom Books.

* You can read more about this story here on the Treason Felony Blog and 'Facts and Figures of the Belfast Pogrom 1920-1922' with text and cover as printed in 1922 can now be ordered directly from Amazon.