Remembering Irish revolutionary Michael Collins with a selection of quotes spoken by and about "The Big Fella." 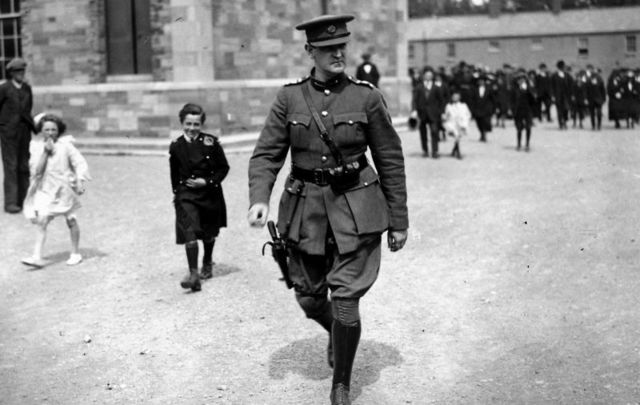 Remembering the Irish revolutionary Michael Collins with a selection of quotes about and rousing words spoken by "The Big Fella."

Michael Collins, Ireland's beloved revolutionary hero who helped to shepherd the Irish people through the War of Independence and the Anglo-Irish treaty, was assassinated on August 22, 1922, at Béal na Bláth in County Cork.

He was the most admired Irishman of his generation and he uttered memorable words during his lifetime. Here are our top ten Michael Collins quotes:

“He comes from a brainy Cork family.”

-From a file in Dublin Castle that Collins himself found.

“There is no crime in detecting and destroying in wartime the spy and informer. They have destroyed without trial. I have paid them back in their own coin.”

-Collins commenting on Bloody Sunday, when his men gunned down British spies in Dublin.

“Lloyd George … I find to be particularly obnoxious. He is all comradely, all craft and wiliness—all arm around the shoulder…not long ago he would have had me joyfully at the rope end.”

“Give us the future..we’ve had enough of your past..give us back our country to live in—to grow in..to love.”

-During the treaty negotiations.

“To me, the task is a loathsome one. I go in the spirit of the soldier who acts against his best judgment at the orders of his superior.”

-On being sent to Downing Street for the negotiations.

“Think what have I got for Ireland … Something which she has wanted these past 700 years, will anyone be satisfied with this bargain, will anyone? I tell you this, early this morning  I have signed my death warrant.”

-After signing the treaty.

“In my opinion, it gives us freedom, not the ultimate freedom that all nations desire.. but the freedom to achieve it.”

-His take on the treaty.

“Yerra, they’ll never shoot me in my own country.”

-Just before leaving to face his fate at Beal Na mBlath.

“He was an Irish patriot true and fearless.”

-Winston Churchill about the man he once considered an implacable enemy.