The rise of Sinn Féin and the ‘Others’

The full impact of the Assembly election in the North has yet to be realized. 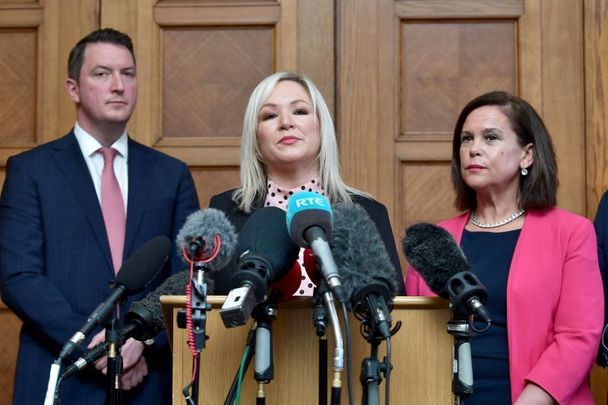 The Democratic Unionist Party (DUP) blocked the Assembly and government, a tactic opposed by all other parties. The DUP claims to be taking this course of action in protest at the agreement between the British government and the EU, the so-called Irish Protocol that prevents a hard border from being imposed across the island of Ireland. The Protocol is the child of Brexit supported by the DUP.

They have stated that either the Protocol goes or the Good Friday Agreement goes. Their threat is that they will hand the keys of the house back to UK Prime Minister Boris Johnson, the man who signed the agreement. But the keys are not theirs to hand back.

This position betrays the wholly conditional position of the DUP to the Good Friday Agreement. They will refuse to take part in the institutions unless they can dictate the terms.

The party that opposed the Good Friday Agreement and never signed up for the agreement now believes that it can hold the will of the people hostage to their demands. Neither the agreement nor the Protocol is in the sole gift of their party or the British government.

The Good Friday Agreement is the people’s agreement, passed by huge majorities north and south.

Like the Protocol, it is an international agreement protected in law. Any unilateral actions by Johnson will be to breach agreements and break the law.

President Biden and US Congress have been resolute: respect international law, no unilateral action, and find agreement.

The institutions in the North are based on power-sharing between the main identities and underpinned by rights.

For the first 50 years, the North was run as a single-party state by the Ulster Unionist Party with nationalist parties sidelined and marginalized. The institutions in the North were designed to ensure that scenario could never be repeated. Any government at Stormont would require cross-community support.

The DUP actions have reduced government power-sharing for the greater good to a veto on government formation until their demands are met.

For power-sharing to work, those elected to the Assembly have to register as unionist (in favor of the union with Britain), nationalist (in favor of Irish unity), or “other” (members who rejected these titles).

In this Assembly, the others are the members of the Alliance Party and the sole member of People Before Profit, a party that supports Irish unity but rejects the term nationalist.

The election returned 36 members from pro-Irish unity parties, 37 from unionist parties, and 17 members from the Alliance Party. The total breakdown was a combined pro-unionist party vote of 42.1 percent, a pro-unity party of 41.5%, and a vote for others of 16.2 percent.

Just over half a percent separates the unionist and nationalist vote. There is no clear majority in favor of continued partition.

Unionist commentators and Taoiseach Micheál Martin have been quick to point out that there has been little growth in the nationalist vote share over the past 24 years. The sin of omission leaves only half the story.

The rise of the Alliance vote has been heralded as both the rise in the middle ground and a break from a binary nationalist/unionist position. It is assumed that this is a vote for the status quo, and so a unionist vote.

The popular assumption is that this is not held out anecdotally or in the data. People who vote for Alliance do have a view on the constitutional question.
In the week before the election, both the Lucid Talk poll and the University of Liverpool poll found the Alliance Party's second preference vote breaking 2:1 in favor of the nationalist parties. These poll results were witnessed in Alliance Party transfers which moved to parties supporting Irish Unity.

While the Alliance Party is agnostic, non-committal, or neutral on constitutional change, it appears their voters have a clear preference for parties that support Irish unity. This does not mean that unity is their primary or immediate concern. But they do support nationalist parties as their second choice.

The Alliance Party vote cannot simply be discounted or added to the unionist vote. This does not mean that Irish unity is inevitable, but it is possible.

This election was a waymarker for change. There is no unionist political majority. Society is changing. The Good Friday Agreement, despite the challenges, remains the will of the majority and the pathway to managing change.

The future is in the hands of the people. We cannot second guess the will of the people or assume the outcome of any future Irish unity referendum. Let’s have the discussion, commission the research, and let the people have their say.

We have a British government that plays fast and loose with the agreement and international law. The leading party of unionism is in denial and rejects the vote of the people. It is past time for an Irish government to lead, plan, and prepare for a unity referendum.

The people have spoken, all has changed, changed utterly.

(Ciarán Quinn is the United States representative for Sinn Féin.)