One writer in Boston argues why Irish Americans should be supporting the Black Lives Matter movement. 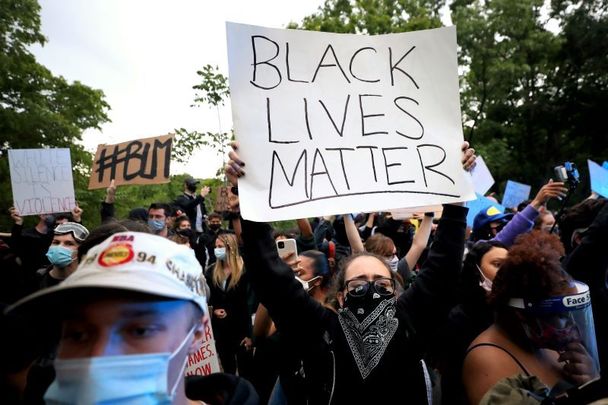 Irish-Americans should strongly support BLM by championing the movement and correcting their own biases.

Since the police killing of George Floyd on May 25th, Black Lives Matter (BLM) protests have started a national reckoning of America’s structural subjugation of African Americans. While Black Lives Matter protests are not new, this is different. Four hundred years of oppression has reached a breaking point; Mr. Floyd’s murder was the spark that lit the fire beneath an invigorated Black Lives Matter movement.

As members of a group who celebrate their ancestors’ perseverance through systemic prejudice, and who champion the civil rights of Irish Catholics in Northern Ireland, Irish Americans should wholeheartedly support the protests and the Black Lives Matter movement. The mission of BLM — ensuring equal treatment under the law and ending state-sponsored violence against a minority — is aligned with the Irish Republican cause, which Irish-Americans have enthusiastically supported. But supporting the Black Lives Matter movement requires going beyond protesting and voting; true allyship requires Irish America to remedy the biases of our own community.

At its core, BLM aims to correct the lasting effects of slavery, Jim Crow, and segregation. Surely Irish Americans, whose ancestors fled the ethnic cleansing of the Great Hunger, understand the persisting consequences of past injustice. Ireland’s population still hasn’t recovered from the Hunger, which ended sixteen years before America abolished chattel slavery. We still resent the Black and Tans for committing mass murders and rapes in early 20th century Ireland, so we should be fighting over the pen to sign the petition to label the Ku Klux Klan a terrorist organization.

During The Troubles, Irish America was enraged by Britain’s cruelty in Northern Ireland, especially internment, the practice of imprisoning anyone suspected of paramilitary activity without trial. Flimsy evidence was all that was needed to bury the victim away in a cold, dark cell. Mass-incarceration, which disproportionately targets African-Americans, is cut from the same cloth. Just like internment, mandatory minimums, three-strike laws, and the fabrication of evidence are an excuse for the state to deprive certain groups of the right to fair trials and due process.

Both Britain and the U.S. have an egregious history of allowing, enabling, and even committing violence against the oppressed group. In Belfast, the SAS’s shoot-on-sight policy turned the army into government-backed death squads. And when it was discovered that Margaret Thatcher was in bed with Loyalist paramilitaries, (she asked the UVF to assassinate the Irish prime minister), Irish Americans were enraged. The anger was justified, but similar condemnation should be leveled at the American government, which has the blood of generations of African Americans on its hands.

In 1985, the Philadelphia police used a helicopter to drop a firebomb on a house of suspected Black militants, killing eleven and burning down the heavily populated black neighborhood. More recently, Louisville police officers shot and killed Breonna Taylor during a midnight no-knock raid. Their report claimed no one was injured. And were it not for a leaked cell-phone video, the Glynn County Police Department would have successfully covered up the lynching of Ahmaud Arbery.

The parallels of oppression are horrifically comical. Between the massacres by government forces, the refusal to prosecute hate crimes, and the systemic voter suppression, one has to wonder if the Creator is lazily re-using the same storyline, merely swapping out “FBI” for “SAS” and “Belfast” for “Philadelphia”.

Past and present, the Irish diaspora has bombastically condemned injustice in Northern Ireland. Yet, identical injustices are being committed at home against our fellow countrymen and women. That deserves equal attention, fervor, and action. And while it's important to take steps to counteract anti-black racism, we need to end the ways we perpetuate it.

A Legacy of Anti-Blackness

It’s no secret there’s a history of anti-blackness in Irish America. In the 19th century, Irish immigrants and their descendants were on the penultimate rung on the social ladder, one step above African Americans. Happy to have someone under them, they fostered anti-Black racism. At the start of the 20th century, whiteness became the primary factor of societal acceptance, and the Irish “became white.” With this change in the social order, Irish America was another brick in the wall of white supremacy that imprisoned Black Americans — a wall that still stands today.

The Irish American diaspora is what sociologists call a “late ethnicity” — generations departed from Ireland, our ancestral identity is rooted in the stories and culture passed down from generation to generation. It’s naive to think the anti-Black racism was omitted from this cultural handoff, especially when it’s modern ramifications are so glaringly evident.

Despite being repeatedly debunked, the “Irish were slaves too” myth is still floated in right-wing circles. Claiming the Irish overcame the same obstacles faced by African Americans, this conspiracy theory tries to blame the social and economic damage of systemic racism on African Americans. And Former Speaker of the House Paul Ryan, who repeatedly touts his Irish heritage, spent his tenure facilitating President Trump's racism and xenophobia — when the President supported Neo-Nazis, Ryan called it "morally ambiguous."

Yet anti-Black racism is far from exclusive to conservatives. Located in the progressive bastion of Massachusetts, Boston — America’s beachhead of Irish immigrants and their descendants — is notoriously racist. During the 70s and 80s, white Bostonians rioted to prevent the integration of public schools. In the iconic Irish neighborhood of South Boston, racist mobs threw stones and bricks at buses of African American children.

Today, Boston’s racism may be more discreet, but it still festers. Racial slurs are casually tossed around bars that proudly display the Proclamation of Ireland, a document championing the rights of oppressed people. The South Boston Saint Patrick’s Day Parade is a festival of cognitive dissonance: signs and banners promoting Ireland’s unification and civil rights movement are juxtaposed with Confederate flags and t-shirts mocking Colin Kaepernick. Fenway Park, which far exceeds the cultural relevancy of any of Boston’s historical sites, is dreaded by African American baseball players who are subjected to racial slurs from the crowds. And while African Americans make up 22% of Boston’s population, they account for over 70% of those stopped by the Boston Police Department. No wonder African Americans consider Boston the “least welcoming” city in America.

It’s uncomfortable to admit, but a culture of anti-Black racism persists, and direly needs to be corrected.

In the Catholic neighborhoods of Belfast, murals and placards supporting the rights of Palestinians, Catalonians, African Americans, and other marginalized groups are side-by-side with celebrations of Patrick Pearse and Bobby Sands. Evidenced by their idolatry, it is clear the Catholics of Northern Ireland do not see their struggle as an individual cause, but rather as part of a global campaign for equal rights and human dignity. But Irish Americans have missed this full picture.

Squinting across an ocean and back a century, we’ve developed cultural tunnel vision — fixated on Ireland’s struggle, Irish America overlooked identical injustices against African Americans right next door. We should correct this oversight by bringing the same fervor of Irish Republicanism to the Black Lives Matter movement. The fight for equality is just as important in Boston as it is in Belfast.

There’s a lot of strong revolutionary rhetoric and bravado from Irish America. Now it’s time to prove it. Protest, vote, donate, and most importantly, reflect.

*Joe Mayall is a Boston-based freelance writer who covers politics, culture, and combat sports. You can find his work on Twitter or at JoeWrote.com.