Why are American-born descendants of Diaspora Irish so tenacious about identifying with their homeland, even when their connections are generations distant? 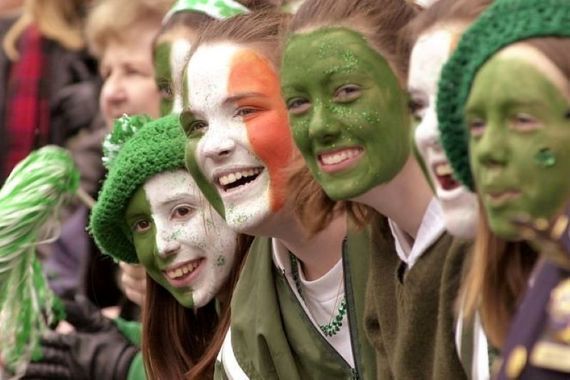 Despite being multiple generations removed from Ireland, many Irish Americans still identify as Irish.

Diaspora is defined as the dispersion of any people from their original homeland.

For centuries, the Irish have quite famously dispersed. Leaving their homeland for vaster shores since before the famine, Irish women and men have established themselves across the world, many settling in America.

As a matter of fact, the population describing themselves as Irish-American is seven times larger than the population of Ireland itself. And the "Irish in America are tenacious in their cultural identification," writes Eileen Markey, with many claiming an Irish identity even a century after their ancestors left Ireland.

Why are American-born descendants of Diaspora Irish so tenacious about identifying with their homeland, even when their connections are generations distant?

It's two-word simple for Kerry Keys. "My family," says this Ohio-born student, named after Ireland's south-west county. A fourth-generation Irish American living in New York, Keys says that "Irish culture is important to my family so it's important to me."

She's not the only one whose family helped shape her Irish American identity.

"My parents talked to my brother and me about Irish culture," says California-native Rachael Gilkey, director of programming and education at the Irish Arts Center in Hell's Kitchen.

It's family that keeps Paul Keating's Irish roots strong, too. Born the youngest of eight in Washington Heights, Keating lived in his "mother's homeplace, a farm outside Ennistymon, County Clare" one summer and it's that trip which helped twelve-year-old Keating understand what his parents left behind when they came over during the great depression.

That journey also helped forge bonds that have gone toward a "lifetime of activity in the Irish American community" in New York, says Keating, who writes about Irish music for the Irish Voice, the sister publication to IrishCentral.

Writing is at the root of why American-born novelist Kathleen Hill identifies as Irish.

Growing up in a house where four generations of her Irish American family lived, Hill says. "I started writing late and when I did I realized so many generations of my family were committed to writing their experiences in diaries and journals."

With roots reaching back to Co Roscommon and Co Clare, Hill eventually followed in the footsteps of her grandfather, who returned to Ireland to find where his family came from. The results of Hill's own travels became her second book, "Who Occupies This House," a novel of multiple generations of Irish living in the same house over nearly a century. "I always think of Irish people as people of the book…Irish voices, they're important to me as a writer."

More than books, music, and celebrations keeps each of these Irish Americans connected to their culture and to Ireland.

"Working at the Irish Arts Center continues to let me examine what Irish heritage means," says Gilkey, who received her Irish Studies masters degree from the National University of Ireland in Galway. "If I weren't working here I would definitely be continuing some of the traditions my parents did with me with my own child, food culture, sharing myths and folklore of the country, and engaging in whatever culture we can soak up."

Along with a devotion to New York's "beloved Irish Arts Center or Glucksman Ireland House," Hill maintains Irish ties through visits to Ireland, where she gives talks on topics about which she's passionate, including Irish writer Maeve Brennan, long-time writer of a popular column for the New Yorker in the 1950s and 60s.

One of the most remarkable achievements of the Irish in America is that they have stayed Irish, writes Jay P Dolan in "The Irish Americans: A History." "In becoming American they have acquired a national or political identity, but they also chose to remain Irish."

Though the Diaspóra na nGael has seen millions of Irish leave their homeplace, settling across the world, from Latvia to the United Arab Emirates, Australia to Norway, Kerry Keys perhaps summarizes best why almost thirteen percent of New Yorkers identify as Irish.