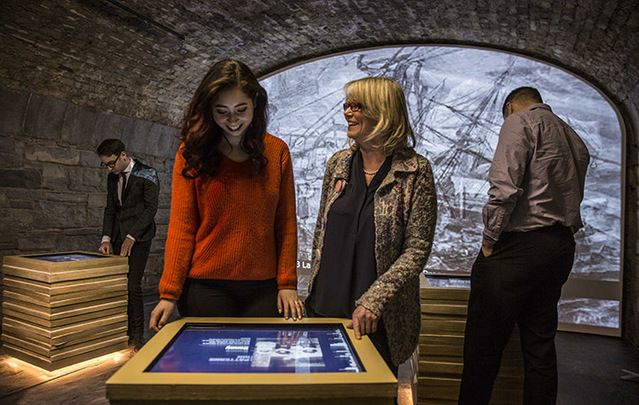 In the heart of Dublin’s north city center, where many emigrants would have left Ireland’s shores, a one-of-a-kind digital museum is opening today dedicated to the Irish Diaspora around the world, their influence and, most importantly, their stories.

The extraordinary museum, EPIC Ireland, uses state-of-the-art technology to tell the stories of 10 million journeys and the roots of 70 million people. From missionaries to those who left Ireland due to hunger and oppression or those who left to trade and expand their horizons the museum is filled with hundreds of Irish stories. Having worked on this Irish American website for six years and having been among the diaspora for some time I came across many emigrants and tales I had never heard of before.

This Friday, May 7, the interactive exhibition, designed by Event Communications – those responsible for Titanic Belfast – opens its doors to the public. Early this week Neville Isdell, the man who bought the impressive CHQ (Custom House Quay) building just three years ago, invited a lucky few to preview the exhibition and I was lucky enough to be among them.

Isdell, the former CEO of Coca Cola, was born in Downpatrick, County Down, but moved away from Ireland at the age of 10 to Northern Rhodesia. He told the visitors to EPIC that in the past 18 frenetic months of production he has kept three points in mind for what he wanted from his new digital Diaspora museum.

Firstly, that the museum must capture how special it is to be Irish. As he was speaking to the crowd of visitors Isdell recreated a conversation which any Irish abroad will recognize – the one where a stranger reacts with delight when you utter the words “I’m actually from Ireland.”

“I believe very deeply and I believe that this is a story that was not being told,” said Isdell. “I believe there's a little too much coverage, in all honestly, about the difficulties in the Irish people's history. So here’s also about a celebration of the Irish people who lived.”

The second important factor was where the museum was housed and the CHQ building seems entirely apt. The former dockside bonded warehouse is nearly 200 years old and is filled with history, making a beautiful juxtaposition to the super-modern exhibition in the vaults. Isdell’s last requirement for EPIC was that it be world-class, and it’s certainly that.

Visitors enter through departure gates where they are issued with a passport to be stamped in each room they visit. This passport acts as a guide for the museum and also provides a surprise at the end of the tour.

Organized into the themes of migration, motivation, influence and connection, the exhibition is spread throughout 20 immersive galleries telling the stories of Irish communities overseas – past, present and future.

It explores the stories of adventure and tragedy that have shaped the narrative of Irish emigration. From why people through the ages have left Ireland, the extraordinary influence of the Irish abroad in politics, business, science, sport and the arts, and how the technology of today has changed the emigrant experience.

Speaking before the launch Conal Harvey, EPIC Ireland’s Managing Director, said the vision and objective of EPIC Ireland is to tell untold epic stories in a unique, highly entertaining and informative way.

He said, “EPIC Ireland provides the opportunity to celebrate and enhance the connectivity between Ireland and those who left, but benefited from being Irish. It will also enable those with no connection to Ireland or its diaspora to have the opportunity to understand this story of the Irish people and why emigration looms so large in the Irish consciousness both in the past and today.”

Included in the center will be a state-of-the-art genealogy center, operated by Eneclann, Ireland’s leading genealogical services provider. As well as extensive research facilities they will offer the latest DNA testing to help visitors trace their Irish roots.