The resilience of the Kilfenora Ceili Band

It has been 25 years since the Kilfenora Ceili Band scored the second three-peat in the illustrious history of the Senior All-Ireland Ceili Band competition at Fleadh Cheoil na hEireann. 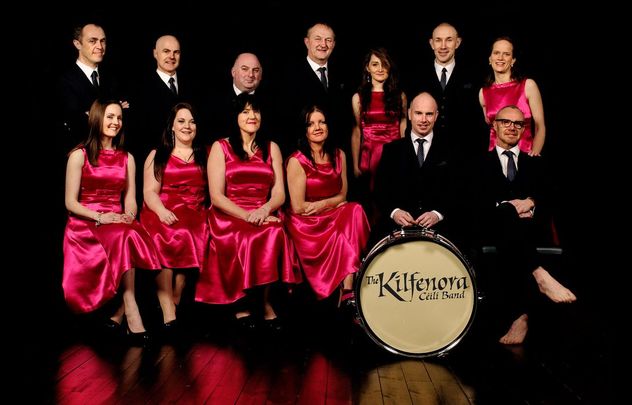 Other bands have accomplished the still amazing task of copping first place three years running against stiff competition usually considered the foremost rivalry, and the most sought-after ticket, in the entire annual weekend of traditional music contests.

But none had managed to do so twice over two different generations as did the Kilfenora in the first decade of the august event when they won in 1954-1956 in an era when they were vying for recognition with the Banner County’s other prize-winning outfit, the Tulla Ceili Band in the early days of the Comhaltas Ceoltoiri Eireann’s prestige event. In 1961 they added another All-Ireland to their fabled legacy.

The band reformulated with a younger generation under leader and banjo player John Lynch in the early 1990s with the blessing of the previous bandleader Kitty Linnane and won their own trifecta in 1993-1995 in the era when we first heard about the Celtic Tiger rising.

Read more: Christy Moore to perform via live stream from Dublin in September

The long-playing record albums of the first edition were a staple in any American household with Clare roots with a taste for traditional music, and they were well-worn out in our Manhattan home with my parents’ own ancestral ties to North Clare so prominently celebrated.

The opportunity to visit the U.S. never materialized for the Kilfenora, while the Tulla Ceili Band had made a number of forays over and even “donated” a pair of Tulla stalwarts in accordion player Martin Mulhaire and flute player Michael Preston who immigrated to New York after a couple of different tours (Mulhaire in 1958 and Preston in 1961).

In 1997, John O’Brien from Co. Mayo extended an invitation to the Kilfenora Ceili Band to play at the Cleveland Irish Festival in Ohio.  When I heard about that potential appearance there, as a proud native New Yorker and a past president of the Co. Clare Patriotic and Benevolent Association of New York, I was determined that the Big Apple had to be a stop on their maiden voyage to America.  I initiated negotiations with O’Brien and Lynch for a joint venture and then had to figure out how to make it work logistically and financially in adding another week to their sojourn to America.

Thankfully, I had a good contact at Lincoln Center in Manhattan who was the producer of the marvelous summer dance series called Midsummer Night’s Swing on the Fountain plaza. I convinced her that the addition of one of Ireland’s foremost dance bands to her multi-cultural lineup would be a huge draw for the blossoming set dancing revival scene in the Northeast at the time which was drawing over 500 dancers to the annual CCE conventions.

I must have made a good case because she readily agreed and in doing so offered a lucrative fee that would have covered about half the anticipated expenses for the week in the New York area.  That only left arranging for three more ceilithe gigs within a reasonable drive from an affordable New Jersey hotel and transport for 12 people to be sorted. Another one of my “be careful what you wish for” scenarios.

Their visit to New York was eventful starting with the Lincoln Center event itself one sunny evening where the dance venue was carefully constructed to provide a spacious timber floor with a good spring that set dancers love and a beautiful stage and sound system to feature the band.

Over 600 people paid their way inside the dance area, but there was an estimated 200 or so around the periphery where they could watch and listen or even dance on less-forgiving concrete.  Believe it or not, the onlookers swelled significantly when intermission in all three surrounding theaters active that night brought out fascinated culture buffs who were entranced on the balconies viewing the ceili mor below. And the sets were flying it in the open-air venue in the heart of New York City.

The band came well stocked with the brand-new second CD Set on Stone given a Manhattan launch at the then-popular Ginger Man Restaurant across from Lincoln Center before the ceili got underway.

The other three ceilithe at the Irish American Home Society in Glastonbury, Connecticut, the Mineola Irish Center on Long Island, and the final one in Ridgefield Park in a Knights of Columbus Hall were well attended but less dramatic and helped cover the expenses.

The Kilfenora Ceili Band traces their roots back 111 years to 1909 and the origin of the Kilfenora Pipe Band in the North Clare village that serves as a gateway to the Burren.   Respectful of their history and those who have gone before them, the current band has evolved in so many ways and could hardly fit the profile of the old ceili bands whose sole purpose was to play for and please the dancers on the floor.

While they are well able to do that still and appear at a number of dance events throughout Ireland, they are recognized as one of Ireland’s finest concert bands these days and can regularly fill the National Concert Hall in Dublin where they appear for an annual St. Patrick’s Day performance.

In 2009, they gave a historic multi-media presentation and concert that I covered marking their 100th-year celebration that proved the depth and commitment to traditional music and dance of the band members while also suggesting that they had fertile ideas for expanding their reach for the second century.

They are smitten with the taste for the brighter lights of a concert stage and with the rigor and discipline of full-time professional orchestras under the leadership of John Lynch and the creativity of musicians like Garry Lynch, Tim Collins, Anthony Quigney, Annmarie McCormack, Anne Rynne, Claire Griffin, Fintan McMahon and Sean Griffin who have been the stable core for decades now.

To expand their reach and sound they had to stretch further themselves and bring in some new and younger blood, some of whom had the fundamental advantage of their own Kilfenora musical heritage along with additional strings to their bows like Sinead Heagney (fiddle and viola), Eimear Howley (fiddle, viola, banjo, and mandolin), Sharon Howley (cello) and Brian O’Grady (double bass).

They also added songs to their repertoire and more recent recordings from singers like Don Stiffe, Jerry Lynch, and most recently Edel Vaughan.  To complete the super-sizing mode and reflect the seismic shift in percussive step dance that has paralleled their own progression first through the top-class Michael Donnellan, a powerful champion dancer and teacher paved the way for the solo art form to be featured along with the country sets which would have been the obvious act in their shows from the ceili realm.

Their performance palette has been fully enhanced now and they are in huge demand all over Ireland and occasionally in Europe.  They regularly appear at fleadhanna ceoils, festivals, and special engagements. And their tenth CD, Both Sides Now, was released over a year and a half ago as a strong symbol of how the band has made that transition without compromising the past or neglecting the present or future.

It also allowed for recent compositions to emerge like new tunes in the tradition from Dr. Tim Collins, an astute academic as well as a seminal concertina player and the West Limerick man’s ode to Clare, “Clare My Heart My Home,” a song that made its debut on Fleadh TV at the 2017 Ennis Fleadh Cheoil na hEireann. It was sung brilliantly then by the recently deceased Jerry Lynch (brother of John and Pat who was in the band who won the All-Irelands) and Edel Vaughan.

But like all other Irish artists, their shows were canceled since mid-March, and going cold turkey was unpalatable fare for the creatively active ensemble who couldn’t even gather for the regular band rehearsals around Clare.  With such a complex act that sets a high-performance bar for itself, the virtual world was not an easy route to consider but there is a first time for everything they say.

On Sunday night, August 23 they did their first virtual concert live in a space created by Experience Productions, Ltd., with superb production values and proper social distancing for a cast of 17 artists. A side stage was available for singer Vaughan which she shared with three sensational step dancers.

Sinead Neylon appeared with two champion step-dancing brothers, Matthew and Michael Gardiner who were born in Denver but have lived in Donegal since 2006 with their Irish-born parents. It was well worth the €10 to watch it live in the interactive environment where compere Garry Shannon mingled jokes in with comments from the online audience.

If you have never seen the Kilfenora Ceili Band live and wonder what all the fuss is about here is your chance because the entire two-hour show is available on replay for a fiver at their website www.kilfenoraceiliband.com.