Irish immigrant support groups in the US have made statements expressing their support for the Black Lives Matter movement. 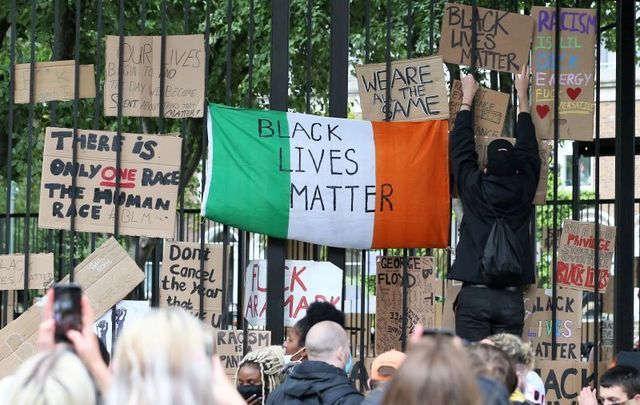 Crowds placed placards on the fence outside the United States of America Embassy in Dublin on June 6, 2020 to show their support for the Black Lives Matter movement, following the death of George Floyd in Minneapolis. RollingNews.ie

Irish immigrant support groups in the US are rallying behind the Black Lives Matter movement.

The umbrella organization representing Irish immigrant support groups throughout the U.S. issued a statement this week in support of peaceful protests against racism.

The coalition, according to a statement issued Monday, “believes in a welcoming society where all members are respected and valued, and where cultural diversity and humanity are prioritized.”

The statement added, “In the aftermath of George Floyd’s death and the ongoing protests to highlight systemic injustice, the coalition is compelled to speak out against racism. We stand in solidarity with our friends and colleagues in the black community, and all those who seek to alleviate cultural oppression and inequality by supporting concrete, measurable changes to create a more just society.

“The coalition commits to strengthening relationships with organizations that support diverse communities. Further, we will continue to facilitate learning opportunities and the sharing of resources for our membership that highlight multicultural perspectives, underscore commonalities and celebrate the diversity of our global Irish family.”

Rian Immigrant Center in Boston, formerly known as the Irish International Immigrant Center – the name change was instituted in February to reflect the group's work with immigrants from around the world – issued a statement last week in which it said it “stands with black lives.”

“We are profoundly saddened by the deaths of George Floyd, Breonna Taylor and the many black lives taken by the brutality of police forces throughout the United States. It is imperative that we work together to dismantle the unjust systems, and the racism and oppression that are deeply embedded within our society in all forms,” the statement said.

“The Rian Immigrant Center welcomes families from more than 120 different countries across the globe, and we are concerned for the well being of our immigrant constituents of color.  Our center will continue to actively fight racism and promote equity in our community. We are committed to fighting for racial justice, and we stand with the black community, and people of color in protesting the injustice and violence they face.

“Our center will continue to provide vital resources to our underserved neighbors as we work towards a society where all are welcomed and valued, and have equal opportunities and protections.”

Rian also offered suggested readings for its supporters, peaceful actions to take, and groups to donate to, including the national chapter of Black Lives Matter.

The Rian Immigrant Center mourns the deaths of George Floyd & the many Black lives who have been lost to police...