A letter from the US Editor of IrishCentral.com. 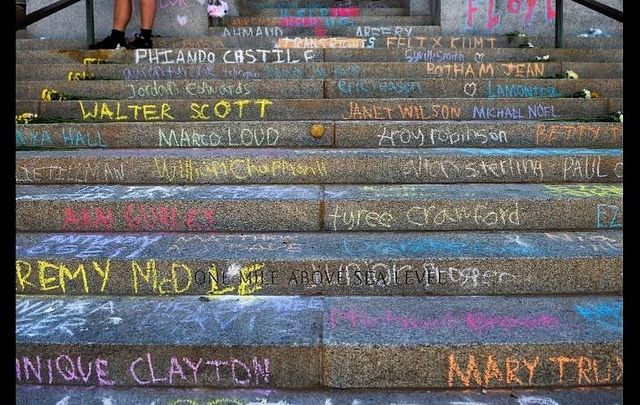 The names of black people killed by police are written in chalk on the steps of the Colorado State Capitol during the fourth consecutive day of protests in the aftermath of the death of George Floyd on May 31, 2020 in Denver, Colorado. Getty Images

What can I do?

For those who may not know, I am the US editor here at IrishCentral.com. After growing up in New Jersey, I now live in the Bronx in a very Irish and Irish American neighborhood. I’m the only member of the IrishCentral editorial team who was born and raised here in the US.

I love my job. As an Irish American (my father and all four of my grandparents are from Ireland), I get to merge two of my passions in life - Ireland and writing.

Last week, I mentioned to our dedicated Editorial Director, Kate Hickey, who is based in Ireland, that I wished we could find some “Irish angle” to the protests and demonstrations that were kicking off here in the States after the death of black man George Floyd. That’s the point of IrishCentral - Irish news, and “Irish” angles on news stories that may not always be apparent. (Admittedly, sometimes IrishCentral gets it wrong, but we try very hard to get it right every single day with a very small team.)

However, given the state of America the past few days, I realized that an “Irish angle” is not needed in this instance given the situations at hand. Situations like these supersede "angles" - they are about all of humanity and must be addressed.

So now it’s Sunday evening. Protests and demonstrations that I naively thought would be mostly contained to Minneapolis after the death of black man George Floyd have not only gone nationwide, but they’ve gone nationwide (and even international) with a vengeance.

According to the New York Times, more than two dozen mayors and governors in the US have imposed curfews, which “is the first time so many local leaders have simultaneously issued such orders in the face of civic unrest since 1968, after the assassination of the Rev. Dr. Martin Luther King Jr.”

It’s a sad state of affairs here in the US - and an undeniable aspect of my white privilege - that I thought the death of George Floyd, the death of yet another black man in yet another disgusting instance of police brutality, would make headlines for a few days before fading into the background.

There is seemingly no escape from the discussions. Nor should there be.

This past Friday morning, I was in my local deli for my daily cup of coffee. While waiting in line, I overheard an interaction between two white men.

One of the men had come into the deli without a face mask. This annoyed me but I didn’t say anything.

The other man, who seems to have known the man without the face mask, half-jokingly queried to the man about where his face mask was.

The deli is small and is stocked with mostly Irish goods. In recent weeks, duct tape arrows were put on the floor to direct the traffic. A clear plastic sheet is now a barrier between the customers and the mostly immigrant staff who work behind the counter. A lot of things have changed quickly.

The maskless man replied with a laugh, “Hey, what are you going to do? Kneel on my neck?!”

Newspapers lined a rack in front of the deli counter, all of them had pictures of cops and or George Floyd on them. A lot of things aren't changing quickly enough.

The two men had a chuckle before turning their chat to “Oh, that cop was some scumbag, huh? Disgusting.”

I didn’t say anything - I was already running late for work and left the deli with my coffee in hand and mask on my face. But I was annoyed. A black man died here in the United States after a police officer kneeled on his neck for nearly nine minutes, and it had already devolved to a poor excuse of a joke for two white men.

I know the men meant no harm by their “joke” in the deli that morning, which is why I think I didn’t say anything. But days later, it’s still floating around in my head as more and more protests and demonstrations against police brutality, against racism, mobilize.

I’ve lived a privileged life as a white woman. There have been so many times that I didn't say anything because I felt I didn't need to say anything. That's changing.

I try to be cognizant of my privilege; it’s a long process to identify the benefits your privilege has awarded you, and, in turn, how that privilege has been detrimental to somebody else.

My privilege means I haven’t had to think about race. I grew up in a white family in a white neighborhood. The schools I attended my entire life were predominantly white - I cannot readily recall any black teachers. I was never confronted, personally, with issues of race.

My predominantly white upbringing is an issue of race in of itself, but since it awarded me privilege my entire life, it was never an “issue” in the negative sense of the word.

Race, therefore, is a difficult thing for me to talk about, to engage with. I don’t want to misstep. I don’t want my concerns, my questions, my actions to been seen as performative.

It’s a process to figure out what you can do without making it seem performative.

Being white is a privilege. So is the access I have to a platform of hundreds of thousands of people around the world via IrishCentral.com, a position I probably would have never been in without my privileged upbringing.

So, here I am checking my privilege - it is something I can do.

As the US editor of IrishCentral.com, I denounce the systematic police brutality that is occurring across the US. I denounce the unnecessary violence towards otherwise peaceful demonstrators protesting the death of George Floyd and other black people.

George Floyd, like so many other black people, should not have died.

There are many great things about America, but there are many things that need a complete overhaul. American political, economic, and social institutions need to be dismantled and rebuilt to ensure the rights and dignity of all people, no matter color, gender, sex, sexual orientation, or nationality in this country.

I would like to direct your attention to these organizations that you can support if you, like me, feel like you need to do something. Donate, volunteer, or amplify them on your platforms.

One thing I learned about this weekend is bail funds. The system of cash bail in the US disproportionately affects lower-income and minority people. Walking free when presumed innocent and deemed a non-threat to the public should not be tied to how much money you can hand over. Bail funds collect money to post monetary bail for those in jail on pre-trial detention.

If you're interested in supporting bail funds, I direct your attention to The Bail Project, Inc and the National Bail Fund Network.

The Minnesota Freedom Fund, which pays criminal bail and immigration bond for those who cannot afford to, is probably the most popular organization to donate to in recent days. On May 30, they said that they have received an estimated $20 million in donations.

The Minnesota Freedom Fund says they are working closely with The National Lawyers Guild and the Legal Rights Center.

The National Lawyers Guild says their mission “is to use law for the people, uniting lawyers, law students, legal workers, and jailhouse lawyers to function as an effective force in the service of the people by valuing human rights and the rights of ecosystems over property interests.”

The Legal Rights Center says they work to “provide the highest quality criminal defense and restorative justice services to low-income people, in particular people of color. Our focus is Hennepin County [in Minnesota], our priority is juveniles, and our services are at no cost.”

If you’re interested in attending or organizing protests, the ACLU has provided this information about knowing your rights.

If you are white and feel guilty about not doing enough, good. If you feel guilty that your privilege allowed you to kick back and enjoy the weekend away from protesting and cops, good. I know I feel guilty. Check your privileges. Speak up. Listen. Learn. Do something.