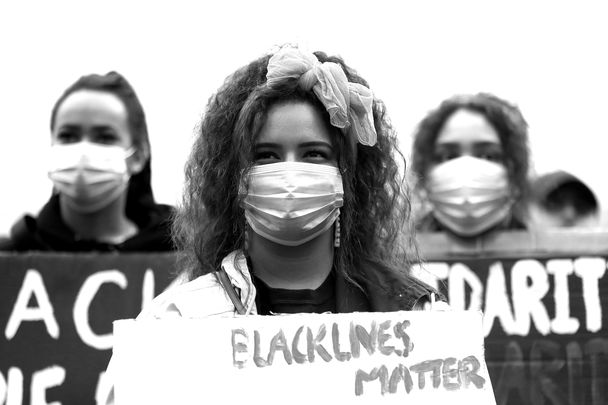 Protests are taking place across the world in support of the Black Lives Matter movement, following George Floyd's death. Getty

Two demonstrations took place in Dublin on Sunday in solidarity with the racial protest across the United States, in the shadow of the death of George Floyd at the hands of the Minneapolis police.

Peaceful protests took place in Dublin on Sunday afternoon in front of the US Embassy in Ballsbridge and the US Ambassador's residence in Phoenix Park rallying against the mistreatment of African Americans at the hands of the police across America.

The United States has had six days of protests where over 4,000 arrests have taken place, during the rallies, some involving looting, and violence. Forty cities have now imposed curfews and the National Guard members have been activated in 15 states and Washington, DC.

These protests were sparked by the murder of George Floyd on May 25. The man, suspected of using a forged $20 note, was pinned down by police officers for about nine minutes, despite the fact that he was pleading with them for release. Police officer Derek Chauvin who knelt on Floyd's neck has been charged with third-degree murder and manslaughter. Protesters say the charge isn't harsh enough and demand charges for the other police officers involved.

In Dublin, in solidarity with the US protests, 150 people gathered holding banners with slogans such as "Black Lives Matter" and "I can't breathe" (some of the tragic final words of Floyd caught on video).

“There needs to be systemic change, from the bottom up,” told BreakingNews.

“I don’t think everyone is out because of that one incident. It’s just the build up of it,” another said.

A Washington protester said "We’re sick of it. The cops are out of control. They’re wild. There’s just been too many dead boys.”

Speaking to TheJournal.ie from Ballsbridge, protester Anna Heverin said: “I, like many people there, am very aware of the situation in America blowing up at the moment and this was a good opportunity as somebody who lives in Ireland but wanted to show solidarity with what is going on in America."

She continued “There has been an absence of justice [in the US] and the actions of what is a minority few police officers, but I think there is a huge problem we can identify with police brutality.”

Several other smaller protests have taken place and others are being planned by several groups to take place in Dublin and across the country this week. On Monday, a bank holiday in Ireland, a socially distanced protest is planned in front of the GPO on O'Connell Street at 3pm.

Democrats Abroad Ireland, in conjunction with the Democrats Abroad Global Black Caucus,  have announced that they will join with Americans and individuals around the world this Tuesday, June 2 to hold an online Black Lives Matter Vigil from 6pm – 9pm.

“I’ve seen the video of the murder of George Floyd and have been watching with heartbreak and outrage as the protests have erupted in my home state of Georgia and across the nation.  I lost a classmate, Marcus, to a police shooting 4 years ago in my hometown of Carrollton. This hits very close to home. I can totally relate to the anger,“ said Carija Ihus, Chair of Democrats Abroad Ireland.

“Americans here and in the US want to know why another family is being devastated by police brutality. We are speaking out and demand that the killers be prosecuted to the fullest extent of the law.”