Anti-vaxxers are a curse, it’s time to expose them

Opinion: "The underlying truth has just been explained to us all again - you cannot fight science with superstition." 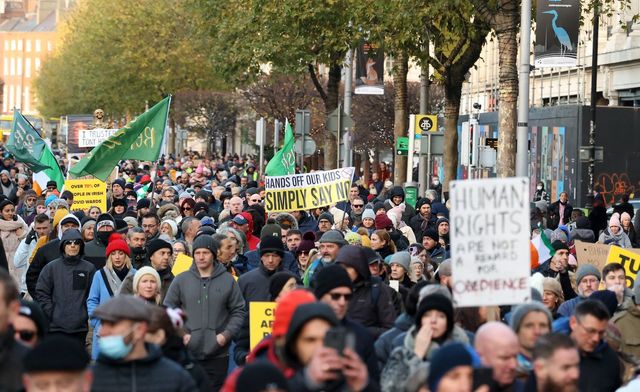 As the new Omicron Covid-19 variant makes its presence felt around the world, the need to shut down the anti-vaccine brigade has never been greater.

Editor's note: This article was published as the editorial in New York's Irish Voice newspaper on Dec 1, 2021.

There was a very poignant case in Donegal in late September of a desperately ill man, Joe McCarron, being escorted out of a hospital by an anti-vaxxer, ensuring him he was fine to leave. The man later died.

How he came to accept that instruction to depart the hospital even as doctors pleaded with him to stay is indicative of the impact of a false narrative worldwide that, unbelievably, it is the vaccine that can kill, not the virus.

Those needless deaths have continued and now may well increase.  From Delta to Omicron to who knows what follows next, last week’s news on yet another Covid-19 variant was a grim disappointment for a world that was hoping to see the virus tail off and just about disappear sometime in 2022.

While that might have been an optimistic scenario, it was definitely a more hopeful time than the dreadful winter of 2020 when no vaccines existed and people, as in the 1918 flu, died helplessly.

There was a lot of finger-pointing right after the Omicron discovery, but the underlying truth has just been explained to us all again -- you cannot fight science with superstition.

The emergency rooms of American hospitals are full to the gills with science deniers who refused the vaccine on the grounds that Venus was in the wrong orbit with Mars or whatever crazy suggestion they swallowed whole from the fevered minds of vaccine deniers, or VDs.

Instead of treating the vaccines for what they are, miracle drugs that would not have been invented even five years ago, the VDs have somehow made the vaccine become the culprit for the whole disease.

In order to do that, right-wingers have viciously attacked heroic figures such as Dr. Anthony Fauci, who played an incredible role in finding groundbreaking treatments for HIV/AIDS, and making him the fall guy because unvaccinated people are still dying in waves.

Let's look at the following recent statistics by the Pennsylvania Department of Health.  Officials report that in their state, “97 percent of Covid deaths, 95 percent of hospitalizations and 94 percent of cases are unvaccinated people.”

Reading those numbers, it is very hard to see what counter position makes any sense but, undaunted, the vaccine slayers continue their deadly mission to misinform and confuse millions of Americans.

The fake information they release, thanks to social media, is swept along in a torrent and accepted as true by gullible people already suspicious of the government.

The reality is that the refusal to get vaccinated on the grounds that it is not safe is the equivalent of not eating so you don’t starve and makes as much sense logically.

What is especially troubling is the politicization of the disease in America, with Republicans far more insistent that the vaccine is too dangerous (meanwhile, injecting themselves with horse and a human parasite medicine called Ivermectin.)

As major research on Ivermectin, soon to be announced, will no doubt show, the drug is the snake oil for this generation of flim-flam men, and they have convinced millions to try it.

Science is an uncomfortable fact for many. Covid-19 is real, the cure is right there, yet 60 million Americans refuse to take it.

Death from Covid is not pleasant as the lungs give out. Choosing to not vaccinate yourself against such a deadly foe is beyond comprehension.

Now comes Omicron and the stakes are higher than ever. We can only hope a sense of reality takes hold and this awful disease is fought by Americans coming together not falling apart.