Antonio Mureddu encouraged Joe McCarron to leave hospital stating that staff at the hospital would "kill" him. He was readmitted to hospital and died within a week. 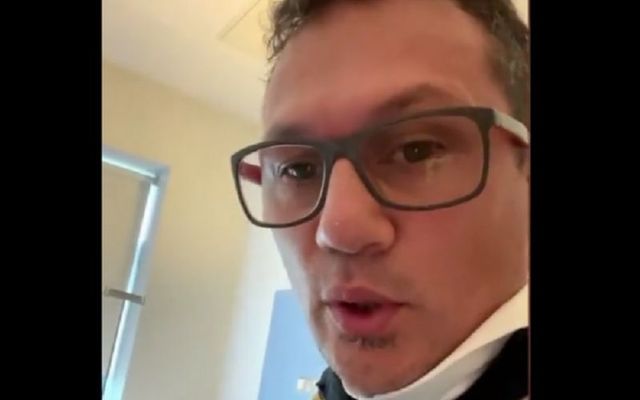 An anti-vax campaigner could face charges after convincing a gravely ill COVID-19 patient to leave a Donegal hospital in September shortly before the patient died from the virus.

Antonio Mureddu encouraged 67-year-old patient Joe McCarron to leave Letterkenny University Hospital, stating that staff at the hospital would "kill" him if he stayed.

A video of the incident subsequently went viral on Twitter, showing staff at the hospital encouraging McCarron, who was visibly struggling to breathe, to remain at the hospital as it gave him the best chance of survival.

However, Mureddu continued to claim that McCarron was "endangering" his life by remaining at the hospital.

McCarron was readmitted to the hospital two days later and died a week later.

The Sunday Independent reports that a garda investigation into the matter is "near completion", with Mureddu set to be charged in connection with the incident.

The publication says that gardaí in Donegal will send a file to the Director of Public Prosecutions recommending that the anti-vax extremist be charged.

Gardaí have interviewed McCarron's family and staff at Letterkenny University Hospital during the investigations.

A source told the Independent that gardaí are considering charges of trespass and examining whether Mureddu threatened staff at the hospital.

They are also examining whether McCarron was forced or coerced to leave the hospital, meaning that Mureddu could face charges of endangerment,

An offense of endangerment involves recklessly engaging in "conduct which creates a substantial risk of death or serious harm to another" and carries a prison sentence between one and seven years.

Mureddu also appeared in Letterkenny District Court last week charged with driving without insurance, using a fraudulent license plate, and failing to give information to gardaí who stopped him in Ballybofey on October 23.

Mureddu refused to wear a mask during the proceedings and refused legal representation, despite the advice of Judge Raymond Finnegan.

"I don't give jurisdiction to this court. I can represent myself," Mureddu told Letterkenny District Court.