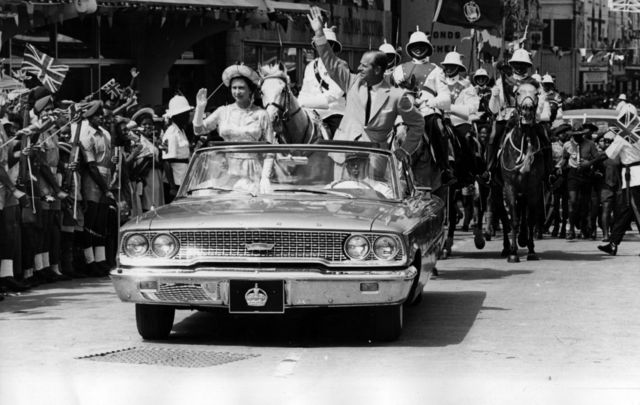 February 18, 1966: The Queen and Prince Philip driving through Barbados waving to the crowds. Keystone/Getty

A warm Irish welcome to the world’s newest republic, the Republic of Barbados, which removed the queen of England as its head of state on Tuesday, November 30.

Barbados was halfway to independence anyway, having proclaimed it 55 years ago but retaining the Queen as head of state. Now the word “royal” will be removed from all institutions and Barbados will have its first elected president, appropriately a woman, Sandra Mason, who led the full independence drive.

Of course, there is a strong Irish angle too. During the terror times of Oliver Cromwell in the mid-1600s, tens of thousands of Irish were shipped to Barbados and forced to endure horrific living conditions while they worked the sugar cane fields.

Black slaves were brought to the island from West Africa and also faced brutal conditions. Irish prisoners could be sold for the vast sum of $35 and then essentially, worked to death. They became known as  Red Legs because the pitiless sun scorched their legs.

Barbados was “Britain’s colonial site of the first ‘black slave society,’” said Hilary Beckles, a Barbadian historian and chairman of the Caribbean Community Reparations Commission. “The most systemically violent, brutal and racially inhumane society of modernity.”

The Irish were first deported there in 1631. Estimates range that as high as 50,000 Irish were sold into bondage in Barbados. Today, the number of descendants has shrunk to just around 400 as Red Legs were an endogamous society, overwhelmingly marrying between themselves.

Frank McNally, writing in The Irish Times last week, quoted an Irish worker who had spent time among descendants.

Sheena Jolley is a photographer who recorded the Red Legs' lives. She said, “Today, most Red Legs have bad or no teeth due to poor diet and lack of dental care. Illnesses and premature deaths due to hemophilia and diabetes have left men blind and without limbs.

The Red Legs do have one serious claim to fame, however.  Global singing superstar Rihanna is descended from the Red Leg Fenty family and her surname is inherited from a Red Leg father who clearly crossed the ethnic lines to marry

She was born Robin Rihanna Fenty and has called a make-up line she owns Fenty in tribute to those roots.  (Clearly, father and daughter have problems; she recently withdrew a lawsuit accusing him of booking concerts for her without her permission.)  Rihanna is one very bright light in a country that was a dark place when it came to slavery.

Slavery in Barbados lasted long into the 19th century. The Barbadian newspaper reported an 1824 proclamation by King George IV, asserting that the “Slave Population…will be undeserving of Our Protection if they shall fail to render entire Submission to the Laws, as well as dutiful Obedience to their Masters.”

Now Barbados will be a proud Republic, albeit with only 300,000 people, but like the United States, India, and the Irish Republic, it can take its place among the countries of the world. Given its grim past, it deserves its day in the sun.