On This Day: War criminal Oliver Cromwell’s Massacre of Drogheda in 1649

On September 11, 1649, the County Louth town of Drogheda was the scene of one of the worst massacres to take place on Irish soil, blackening the name of Oliver Cromwell in Ireland forever. 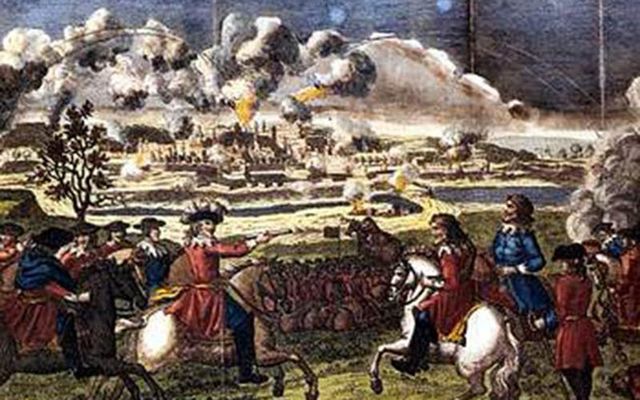 Research has shown that such was the violence displayed by Cromwell and his forces during the Siege of Drogheda and the subsequent Siege of Wexford that, even by 17th century standards, they can be classed as war crimes.

Drogheda was the first major event in the Cromwellian conquest of Ireland, although it took place during the later years of the Eleven Years’ War (also known as the Irish Confederate War, 1641-1652), the turbulent period of Irish history which began with conflict between the native Irish Catholics and the English/Scottish Protestant Settlers in the 1641 Rebellion.

The Eleven Years’ War, however, was also just the Irish branch of the Wars of the Three Kingdoms, a series of conflicts that took place between various political, ethnic and religious groups throughout England, Scotland, and Ireland.

The English Civil War began as part of this conflict series in 1642 and by the time Cromwell was named Lord-Lieutenant of Ireland in June 1649, English monarch Charles I had been found guilty of treason and executed by the English parliament, splitting the English into “Royalists” and “Parliamentarians.”

Following the execution of their monarch, the Royalists signed the Second Ormond Peace with the Irish Confederates (Irish Catholic Confederation which ruled two-thirds of Ireland from the 1641 Rebellion until Cromwell's Conquest), aligning themselves with the Irish against the English Parliament. They were joined by the Ulster-Scots, who also felt alienated by the execution.

In August 1649 Cromwell sailed for Ireland determined to quash the new alliance and re-conquer the country.

In expectation of Cromwell's arrival, the Royalists held a War Council in Drogheda, where it was decided that the town should be held by a total of 2,550 Royalists and Irish Confederate troops under Arthur Aston, to prevent Cromwell from taking control of all Ireland’s eastern ports.

The location of the siege at Drogheda was also significant as the town had been subject to a previous siege during the 1641 Rebellion, during which a Catholic force under Féilim Ó Néill failed to take the town before being disbanded by English troops.

The siege began with the arrival of Cromwell and his approximately 12,000 men on September 3, 1649.

Drogheda was one of the best-fortified towns in Ireland and Aston boasted that anybody who could take Drogheda could take hell. Aston was fully confident that they would be able to slow Cromwell down enough to give Royalists in other parts of the country time to regroup.

Knowing this, Cromwell battered the walls of the town with his eleven heavy, 48-pounder, siege artillery pieces. On September 10, he issued a summons of surrender to the Royalist/Irish Confederate forces which were promptly rejected from inside the town walls and the bombardment renewed with more vigor, breaching the town by the evening of September 11.

Cromwell ordered the Parliamentary troops to storm the town and more than 6,000 men washed through the south walls, slaughtering all resistance, while a cavalry force lay in wait to the north to prevent any escape.

Catholic priests and friars were killed as combatants and a group who barricaded themselves in the steeple of St. Peter’s Church were burnt alive when Cromwell’s troops set fire to the Church.

Around 2,000 died in the massacre, including a number who surrendered before the onslaught, as well as 150 Parliamentarians.

The rationale for Cromwell’s barbaric attacks? Revenge. Throughout the Cromwellian conquest of Ireland in 1649, the new Lord-Lieutenant in Ireland used the murder of Protestants during the 1641 Rebellion as an excuse to inflict incredible violence and to show little mercy.

The events of the 1641 rebellion are well-documented, although the accuracy of what was documented is sometimes questioned. The 1641 Depositions collected witness statements – mainly from Protestants, although some Catholics were also questioned – on the events of the rebellion, amounting to a vast collection of testimonies relating to the loss of goods, military activity, and the alleged crimes committed by the Irish insurgents.

The 31 volumes of manuscript and the 3,500 sworn statements from Protestants who fled to Dublin and Cork during the rebellion were used by Cromwell as justification for his forceful conquest in Ireland.

"Even by the standards of the time [Cromwell's] behavior was beyond the pale,” according to historian Micheal O Siochru, author of “God's Executioner,” a recent study of Cromwell's military campaign in Ireland.

Although much of the evidence compiled within the depositions have been widely contested and caused significant controversy throughout the years, due mainly to the time that had elapsed between the event and the relation of events to be committed to evidence, they are believed to have played a key role in the establishment of the British/Protestant identity in Ireland, especially in Ulster where the depositions report that the 1641 Rebellion began with a general massacre of the Protestant settlers who had dispossessed the Irish-speaking Catholic population of their land during the implementation of the Plantation of Ulster.

"Even right up to the present day at Orange marches in the north, a lot of the banners still have images of 1641 – in particular the notorious massacre of Protestants at Portadown bridge in Armagh, where planters were taken from their homes and forced into the River Bann to drown,” he continued.

“The massacre of Protestants helped shape Protestant identity in Ireland, the sense of being under siege, of being the victims of Catholic aggression."

The 1641 Depositions are now available online through a digitization project run by Trinity College Dublin, where the original depositions are stored. The full catalog can be viewed there.