In 1853 a trusted chief officer saved the Emperor Joseph I from assassination and was hailed an international hero. 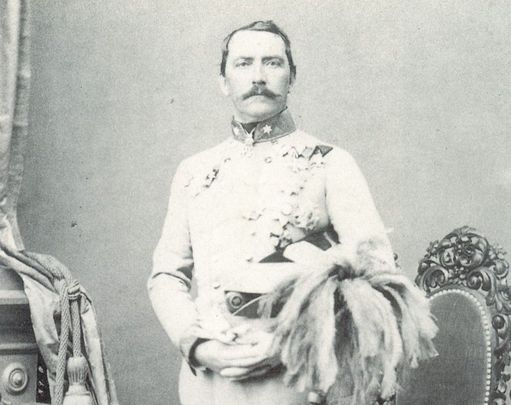 The man behind the salvation of Emperor and King Franz Joseph I, in 1853,  Maximilian Karl Lamoral Graf O'Donnell Von Tyrconnell paternal lineage traces back to County Mayo and further still to Niall of the Nine Hostages.

Franz Joseph I, became Emperor of Austria in 1848 and King of Hungary, Croatia and Bohemia in 1867 and remained in power until his death in 1916.

On the Feb 18, 1853, an assassination attempt was made against him by a Hungarian nationalist, in broad daylight, as he stood alongside one his of his trusted officers Maximilian O'Donnell.

This officer, O'Donnell, was worn Maximilian Karl Lamoral Graf O'Donnell Von Tyrconnell on the Oct 29 1812, in Goldegg, a kingdom of Bavaria, to parents Count Maurice and Christine O'Donnell. His maternal grandfather was Charles Joseph, Prince of Ligne. His paternal lineage was of Irish nobility, a descendant of Niall of the Nine Hostages.

O'Donnells great-grandfather was Major General Count Henry O'Donnell (1726-1789) who left Oughty, County Mayo for Austria, in 1742. Henry flew up the ranks of the Austrian military on account his military skill and fearless swash-buckling exploits on the battlefield.

Maximilian O'Donnell joined the military after finishing his education in Dresden. He participated in several engagements across Europe including Italy, in 1848, and Hungary, in 1849, resulting in several promotions and awards. He went onto marry Franziska Wagner who was not of noble linage and therefore their marriage was frowned upon.

On the Feb 18 1853, O'Donnell was accompanying the 22-year-old Emperor Franz Joseph I, who had acceded to the Austrian throne five years prior as a consequence of his uncle's abdication after the Austrian revolution of 1848.

The Emperor and his officer were strolling along a heavily fortified area inside Vienna chatting. At roughly 1pm, the Emperor goes to looks over a parapet to observe troops on exercise when he feels a powerful blow to the back of the head knocking him to the ground.

As he raises himself from the ground dumbfounded, clasping his neck bloodied and wounded. His shock shifts to terror as he realises his officer O'Donnell is battling an assailant armed with a knife fighting for both their lives.

O'Donnell lands a strike with his saber putting the assailant down and is quickly helped by a passerby to subdue the attacker.

For saving the Emperors life, O'Donnell is made Count of the Habsburg Austrian empire on top of the German title that he inherited from his great grandfather. O'Donnell was also honoured with Orders of Chivalry by several European monarchs, and made Freeman of Vienna, Pest, Prague and Ljubljana.

A church was built on the site of the attack as a votive offering by royalty, on Ringstrasse that stands today known as the Votivkirche.

The passerby (Joseph Ettenreich) that helped subdue the assailant was elevated from a butcher into nobility for his role.

The assailant János Libényi, a Hungarian nationalist and tailor was subsequently charged with regicide and sentenced to death.

In 1898, the Emperors wife "Elisabeth of Austria" was assassinated walking along a promenade in Geneva by 25-year-old Italian anarchist Luigi Lucheni, armed with a sharpened needle.

In 1914, Emperor Frans Joseph issued an ultimatum to Serbia which led to the outbreak of the first World War. He died in the Shönbrunn Palace on the Nov 21 1916 of pneumonia at 86 years of age.

Maximilian Karl Lamoral Graf O'Donnell passed away at his home in Salzburg on the Oct 29 1895 at 82 years of age. He received a burial at Salzburg cemetery.