A band of starving pilgrims at Plymouth Rock was saved at the last minute by the arrival of a ship from Dublin. 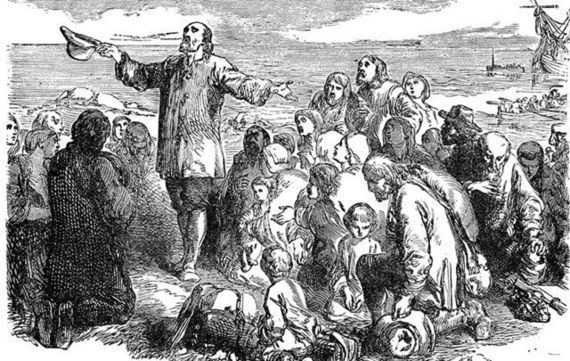 Depiction of Pilgrims during the first Thanksgiving. iStock

The facts of the first Thanksgiving meal may never be known but some believe that it was in celebration of a shipment of Irish food.

No one can say for sure exactly when the first Thanksgiving was celebrated, but at least one historian thinks it was invented as a day of Thanksgiving for the generosity of the Irish people after a ship from Ireland, bursting with provisions, landed in Massachusetts Bay in the freezing winter of 1621.

The first Thanksgiving was actually celebrated on February 21, 1621, when a band of starving pilgrims at Plymouth Rock were saved at the last minute by the arrival of a ship from Dublin bearing food from Ireland.

The Boston Post, the largest circulation newspaper in the 1920s and 1930s, discovered the earlier date for the Thanksgiving ritual. It showed that the traditional date of the autumn of 1621 was actually incorrect.

According to the "Observant Citizen," a columnist for the Boston Post, the Pilgrims in the winter of their first year were starving and faced the end of their project to colonize the new world when “a ship arrived from overseas bearing the much-needed food."

Because of anti-Irish prejudice at the time, the "Observant Citizen" neglected to name it as an Irish ship, but it was actually The Lyon and “its provenance and that of the food was Dublin Ireland.”

It turns out, from records at the Massachusetts Historical Society, that the wife of one of the prominent Plymouth Rock brethren was the daughter of a Dublin merchant and that it was he who chartered the vessel, loaded it with food and dispatched it to Plymouth.

The "Observant Citizen," whoever he was, never admitted the Irish connection, even though a number of Irish organizations challenged him on the issue.

Another thing to be grateful for this Thursday!

How are you spending this Thanksgiving? Will it be an American Thanksgiving with an Irish twist?