Disassembled 17th-century English mansion up for sale in West Clare

Yorkshire couple Steve and Louise Mitchell are selling the stones, beams, lintels, cobble floors, and window masonry from Alwoodley Hall, which was originally built outside Leeds in 1640. 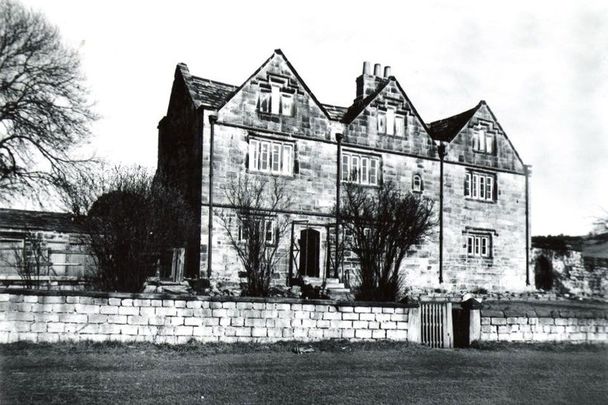 Alwoodley Hall before its deconstruction in 1969. Former Glory

A disassembled 17th-century English mansion that was transported brick by brick to West Clare in 2002 is on the market for €200,000.

Yorkshire couple Steve and Louise Mitchell decided to bring their home with them when they moved across the Irish Sea almost 20 years ago.

The couple had run a large transport business with 36 trucks and 45 staff and decided to retire on the west coast of Ireland at Spanish Point.

They acquired a property overlooking the sea and arranged to bring a deconstructed English mansion with them in eight articulated trucks.

Originally built outside Leeds in 1640, Alwoodley Hall was deconstructed in 1969 by the Sand Moor Golf Club because it had been deemed unsafe.

A local farmer subsequently acquired the stones, beams, lintels, cobble floors, and window and door masonry and left the pieces on his land for more than 30 years, according to the Irish Independent.

Steve Mitchell came across the disassembled house in 1999 and bought it for £50,000. The couple planned to rebuild the 17th-century mansion in Ireland but were informed that they would have to use wider modern windows to do so.

That requirement proved to be a dealbreaker for the Yorkshire couple, who "couldn’t do that to a beautiful and historic 1640s house".

The house has therefore been lying disassembled in their field for the past 20 years.

Steve Mitchell told the Irish Independent that they put the house on the market in 2008 and received some interest and added that they have decided to try to sell it again. He said that it no longer makes sense to live in a four-story country house because his wife is now in a wheelchair.

The original 17th-century mansion was a three-bay, three-story property over a basement and has been estimated to have stretched out over more than 5,000 sq ft.

Experts have also estimated that the original property contained six or seven bedrooms.

"A stone mason in Donegal who I talked to about it said it would take his company three years doing nothing else to carve that stone today and that’s using modern machinery," Steve Mitchell told the Irish Independent.

The disassembled house is comprised of roughly 6,300 rectangular blocks, while any potential buyer will also receive cobblestones from the basement floor, decorative carvings from around the doors and windows, and garden wall masonry.

The materials also include original oak support beams that are stored indoors. Steve said that there are around 50 beams and added that most of them would still be usable today.

A dendrochronologist has examined the beams and dated them as far back as the 1400s, indicating that they may have originally been used in a medieval house.

There are very few big houses in Ireland dating back to before the Georgian period because the country was so often enveloped in conflict that priority was almost always given to castles and other defensive structures.

It is also notoriously difficult to modernize historic period homes because they are generally protected structures, meaning that that it is often impossible to get planning permission for modern comforts such as insulation.

If an owner is fortunate enough to obtain planning permission, they face extortionate costs to retrofit their historic property.

However, Alwoodley Hall offers prospective buyers an opportunity to circumvent the red tape and high costs.

The mansion boasts a fascinating history and was originally built by Sir Gervase Clifton, a 17th-century British MP who once served as the Sheriff of Nottingham.

Clifton became on of the first baronets created by King James I and became a close associate of King Charles I. He managed to retain his property - and his head - when Oliver Cromwell defeated Charles in the English Civil War.

The house eventually came into the hands of Henry Barran, who founded Sand Moor Golf Club on the grounds in 1926.

The house would eventually fall into disrepair, leading to it being found disassembled on the west coast of Ireland.

Whoever does acquire the historic property will have a difficult job on their hands.

None of the pieces of Alwoodley Hall have been categorized, meaning that experts will have to determine what piece goes where.

Furthermore, no archives exist with original drawings or plans.

The property's tiles and roof have also been destroyed, although Steve Mitchell believes it will be relatively simple to reconstruct its outer shell, which boasted a reasonably simple form.