Robert F. Kennedy thought JFK was killed because of him 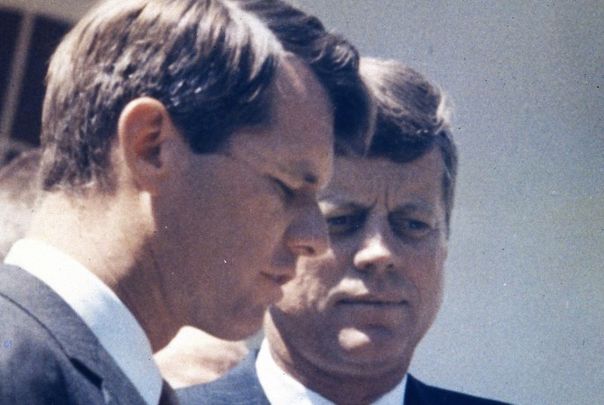 Robert F. Kennedy had his own suspicions regarding the assassination of his brother, President John F Kennedy, in 1963, and may have felt partly responsible.

He also uttered the prophetic words “I knew they’d get one of us, I thought it would be me.”

Robert F. Kennedy, the U.S. Attorney General at the time, had spent the morning of November 22, 1963, at a Justice Department conference on fighting against organized crime and had invited U.S. Attorney Robert Morgenthau and an aide, back to his home, Hickory Hill in McLean, Va., for a private lunch.

In an interview, Morgenthau recalled that at 1:45 pm, Bobby got the call. Kennedy’s wife Ethel called over to him and told him FBI director J. Edgar Hoover was on the line. Kennedy raced over to the phone and heard the devastating news.

“Jack’s been shot in Dallas,” said Kennedy. “It may be fatal.”

According to the Boston Globe, several documents released over the past  decades have revealed what Bobby Kennedy was going through following his brother’s assassination.

“I think he carried a lot of potential guilt,” he said.

Bobby Kennedy even had reason to believe he may have been the ultimate target.

The Boston Globe reported: “Walking the grounds of Hickory Hill just an hour after receiving confirmation of his brother’s death, Bobby confided in an aide something truly unsettling. That aide, Edwin Guthman, would later recount it in his book “We Band of Brothers.” ‘I thought they would get one of us,” Bobby said, adding, “I thought it would be me.’”

“In the five years between his brother’s murder and his own assassination in 1968, Bobby Kennedy voiced public support for the findings of the Warren Commission, namely that a pathetic, attention-seeking gunman had alone been responsible for the murder of President Kennedy. Privately, though, Bobby was dismissive of the commission, seeing it, in the words of his former press secretary, as a public relations tool aimed at placating a rattled populace.”

Although there is no indication that Robert Kennedy found evidence to prove a wider conspiracy, his actions after hearing the news of the assassination, show that he focused his attention on “three areas of suspicion”: Cuba, the Mafia and the CIA. In the hours and days immediately following his Jack’s death, Bobby called a Secret Service agent to make sure there was a priest at his brother’s side, called Defense Secretary Robert McNamara to arrange transport for him to Dallas, called family members, and took a call from John McCone, the director of the Central Intelligence Agency.

McCone arrived from CIA headquarters to Bobby’s estate. Robert Kennedy would later tell historian and aide Arthur Schlesinger that he asked McCone if the CIA “had killed my brother, and I asked him in a way that he couldn’t lie to me, and they hadn’t.”

According to Schlesinger’s biography, “Robert Kennedy and His Times,” although McCone would come to believe there had been two shooters involved in the assassination, he didn’t think the CIA was in any way involved.

“But McCone almost certainly didn’t know the whole truth,” the Globe writes. “In the wake of the Bay of Pigs, the botched attempted invasion of Cuba orchestrated by the CIA, JFK had forced out the agency’s founding director, Allen Dulles, and replaced him with McCone, an outsider. At the same time, the president put his brother in charge of trying to ride herd on the powerful and unwieldy intelligence agency while also overseeing the administration’s interdepartmental Cuba team. The attorney general often began his days with meetings at CIA headquarters in Langley.”

David Talbot, an investigative journalist and author of the book “Brothers,” says that Robert became “JFK’s principal emissary to the dark side of American power.” Meaning that Bobby knew more about the “underbelly of the CIA, especially in relation to Cuba” than did McCone.

Robert Kennedy would call Julius Draznin, a Chicago lawyer for the National Labor Relations Board.

The Globe reports: “Bobby knew Draznin had impeccable mob sources, so he asked him to do some digging to determine if there had been any Mafia involvement in the assassination. ‘I called him back in a couple of days,’ Draznin later told Evan Thomas, author of “Robert Kennedy: His Life.” ‘There was nothing.’”

As chief counsel of the Senate Rackets Committee in the 1950s, Robert Kennedy had interrogated leading gangsters, including Jimmy Hoffa, who became his chief nemeses during the hearings and exposed the connections between the mob and American labor unions.

“Bobby had been unrelenting in his war against these mob and labor leaders, ignoring the admonition of his father to choose less violence-prone targets and dismissing the underworld threats against his own life. Instead, Bobby had doubled down, even persuading his brother Jack, then a senator, to join the cause…

“After Jack became president and the attorney general, Bobby wasted little time in leveraging the full force of the Justice Department to try to crush these corrupt characters. Now, as he strode around Hickory Hill, reeling from the news of the assassination, Bobby couldn’t help but wonder if one of them had been behind it.”

According to a Teamster middle-manager turned FBI informant, a year earlier Hoffa had said: “I’ve got to do something about that son of a bitch Bobby Kennedy. He’s got to go.”

However, Walter Sheridan, who had been Robert Kennedy’s aide-de-camp in the mob war since the Rackets Committee, told Bobby that he was unable to find any evidence linking Hoffa to the assassination.

Around the time of the assassination, mob leader and Hoffa associate Carlos Marcello were on trial in New Orleans. It was the second deportation for the mafia leader, the culmination of a three-year effort by Robert Kennedy’s team to get him out of the country.

Florida mob boss Santo Trafficante Jr was a “former big-time Havana casino owner who lost millions when Castro took over Cuba,” who shared a lawyer with Hoffa — Frank Ragano. Ragano, in his book “Mob Lawyer” wrote how Hoffa had instructed him in the summer of 1963 to tell Trafficante and Marcello that it was time to kill the president. Ragano says he thought Hoffa was only venting and delivered the message “jokingly” but “the mobsters seemed to take it much more seriously.”

Marcello would be acquitted in New Orleans the same day the president was killed.

“While serving time later in life, he was caught on a federal wiretap confessing to an FBI informant that he’d had JFK killed, according to FBI files released under the JFK Records Act of 1992. Trafficante is also alleged to have made a deathbed confession of his involvement to his lawyer, expressing regret that maybe the gun should have been pointed at Bobby.”

Historian David Kaiser, the author of “The Road to Dallas,” said in an interview that he believed Marcello, Trafficante, and possibly Chicago mob boss Sam Giancana, who shared a mistress with JFK, were likely at the behest of Hoffa, all involved in putting in motion the assassination of the president.

The Globe reports: “It hadn’t taken long on Nov. 22 for speculation to focus on the possible involvement of Fidel Castro given the Kennedy administration’s repeated attempts to oust or assassinate the Communist leader. That speculation only intensified after the arrest of Lee Harvey Oswald, whose record of pro-Castro agitation quickly came to light. Yet it’s intriguing that Bobby’s suspicion of possible Cuban involvement seemed to focus squarely on the anti-Castro crowd….”

“…Bobby knew how furious many members of the exile community had become with the Kennedys, based on the administration’s failure to go all out in the effort to topple Castro. The Kennedy brothers had refused to launch a full-scale military invasion of the island nation, and by 1963 had even begun authorizing some back-channel efforts toward compromise with both Castro and his Soviet benefactors. This, Bobby knew, would be viewed as intolerable by the most hard-line Cuban exiles.”

The Boston Globe writes: “As Bobby’s post-assassination suspicions appeared to bounce from Cuba to the Mafia to the CIA, he surely had to confront the reality that the lines separating all three had become increasingly blurry…”

“…There was actually a long-secret alliance between the country’s covert intelligence agency and the underworld. In fact, it was older than the CIA itself.”

Recently released files have that Marcello, Trafficante, Giancana, were all involved, at varying levels, in the CIA-Mafia plots to get Castro.

So why wouldn’t the conspirators have simply gone after Robert Kennedy instead of JFK?

“It is all a matter of speculation, but there could have been a very practical explanation for a more circuitous path. If Bobby had been assassinated, historians point out, his brother could have been expected to marshal every ounce of his prodigious federal power to exact revenge on the murderers and their benefactors. And because the victim would not just be the country’s crusading attorney general but also the president’s brother, the public would have surely given Jack Kennedy a blank check of support for a crackdown on whatever dark forces he determined were responsible,” the Globe argues.

Rex Bradford, a curator of a vast digitized archive of nearly 1 million documents maintained by the Mary Ferrell Foundation, says that many of the recently released documents “strengthen the hypothesis that ‘hard-line intelligence people, hard-liners on Cuba’ were somehow involved in the assassination, with ‘mob people tied into that same milieu.’”

Following JFK’s assassination, Robert Kennedy stayed in his position as attorney general for a little while longer but his head and heart were no longer on the job.

In 1968, Kennedy would become the leading candidate for the Democratic nomination for the presidency. On June 5, 1968, after scoring a major victory in winning the California primary, he was shot by Sirhan Sirhan, a 24-year-old Palestinian. He died the following day.