Down Survey of Ireland maps reveal what Oliver Cromwell stole

A collection of maps at Trinity College Dublin reveals the exact ownership of the lands plundered by the Cromwellian Plantation of 1670. 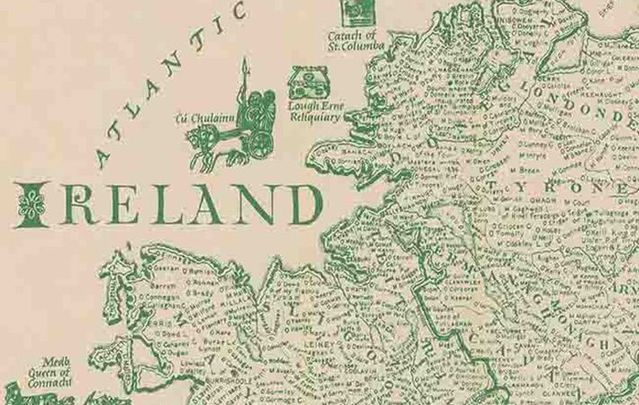 Reckon Oliver Cromwell stole your family’s land back in Ireland? You can find out.

Oliver Cromwell set sail for Ireland on August 13, 1649, starting on his journey to becoming one of the most hated men in Irish history.

Reckon Oliver Cromwell stole your family’s land back in Ireland? You can find out thanks to Trinity College in Dublin.

A collection of maps at TCD reveals the exact ownership of the lands plundered by the Cromwellian Plantation of 1670. The despised English leader stole the land and presented it to landlords, many of whom still control the properties in Ireland today.

The land survey carried out on Cromwell’s orders - the first of its kind anywhere in the world - has been deeply researched and reproduced by the Dublin college with stunning results.

As Trinity College historian Professor Micheál Ó Siochrú told The Sunday Independent in 2013 when the collection launched: “We have never been able to do it to this level before – parish by parish, barony by barony, county by county.

“If you are going to redistribute lands, then the first thing you have to do is map it and that is what happened,” said Prof Ó Siochrú, who is a professor of Modern History at TCD.

“So the land survey – the first of its kind in the world – was carried out on Cromwell’s orders. The results are amazingly accurate for the time.”

The report says the "Down" refers to the chains that were literally "put down" on the ground to measure every inch of Ireland from the smallest parish to the biggest of the 32 counties.

The survey produced an incredibly detailed view of Ireland of the time and also provided a set of beautiful maps that have historic and artistic significance.

The professor added: “It’s such an exciting event. Putting it all back together was like a detective mission. The 1670 parish maps are amazingly accurate.”

The maps were digitized and loaded on to modern-day Google maps to give a complete picture of ‘who owned what.'

Prof Ó Siochrú revealed: “With the aid of ‘Books of Survey and Distribution’ which categorized the huge transfer of land from Catholic families to the new Protestant ascendancy, the result is that people all over Ireland will be able to research the ownership of lands in townlands going back to that time.

“From a historical point of view, it is mind-boggling. We have been left amazed at the scope of the project.

“People will be able to look at their own parishes and see where people were living in the 17th century – we have used it for two months in classes and it was a great hit with students – they all wanted to look up areas they came from or parts of the country they knew.”

The team behind the project mounted something of a CSI-type operation according to the paper.

The original ‘Down Survey’ collection was destroyed in the first Customs House fire in 1711 but copies made at the time and used "in the field" survived.

More than 2,000 maps have been traced to libraries and archives in Dublin, London, Edinburgh, Paris, and Rome.

The reassembled collection is available on the Down Survey website www.downsurvey.tcd.ie.