Joe McCarron has died at Letterkenny Hospital in Co Donegal roughly 10 days after a video of him leaving the hospital with the help of an anti-vaxxer went viral. 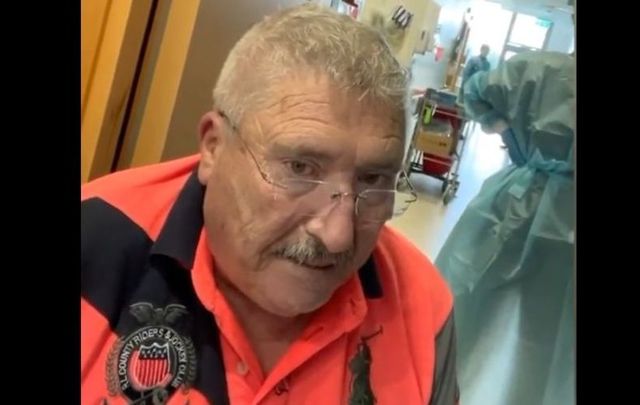 Joe McCarron, 67, who was featured in a video being removed from Letterkenny University Hospital against the advice of his doctors, has passed away.

McCarron's funeral is set to be held in his native Dungloe, Co Donegal this Sunday, according to an announcement shared on RIP.ie on Friday afternoon.

Video of McCarron leaving Letterkenny University Hospital with the help of Antonio Mureddu Gravegliu began to circulate on social media on September 14.

"We are saving Joe's life," Gravegliu says in the video. "Today is a winning day for Ireland." He goes on to thank Dr. Dolores Cahill, a prominent figure in Ireland’s anti-vaccination movement.

A doctor pleads with McCarron in the video to stay in the hospital: “You have the right to decide what you want to do.

“You’re barely able to breathe,” the doctor says. “We want you to stay to help you.”

Gravegliu, who was wearing a mask under his chin, tells McCarron, “If you stay here, they going to f***ing kill you, Joe.”

“I’m very worried about you,” the doctor tells McCarron who appears to be struggling to breathe in the video. “I want you to stay, I think he is saying something very dangerous. What he is saying is wrong and very dangerous.” He added: “I’m not lying to you, you could die.”

“It’s better if you die in the house,” Gravegliu tells Joe.

Two days after leaving Letterkenny Hospital, McCarron was brought by ambulance back to the hospital with breathing problems and was admitted for care.

Upon McCarron being readmitted to the hospital, his family issued a statement which said: "Joe is still in a critical but stable condition. He has serious lung damage from Covid-19 and is on a ventilator, but the signs are good.”

Taoiseach Micheál Martin condemned the incident, saying: “If you get it (Covid-19), you should treat it as very serious.

“Certainly, it is outrageous that anyone would, in an ill-informed way, be advising people to leave hospital. It endangers that person’s health.”

A spokesperson for The Saolta Hospital Group, which oversees Letterkenny Hospital, said: "Saolta has grave concerns about the impact of this type of activity on both patients and staff.

"Patient safety and care is of paramount importance to the group. Hospitals across the region are under extreme pressure as a result of record levels of attendances of both Covid and non-Covid patients.

"The deliberate spreading of dis-information and at times defamatory comments against named staff members along with the posting of these videos on social media platforms is adding significantly to the burden already facing healthcare professionals."

*Editor's Note: A previous version of this article incorrectly reported that McCarron was 75 years old. He was 67 years old at the time of his death.