A look at the political parties in Northern Ireland and how they're preparing for the Assembly elections on May 5. 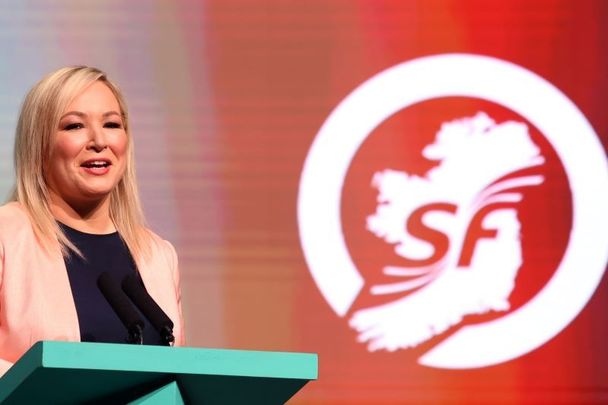 Most commentators believe that Sinn Féin is on the cusp of taking the position of First Minister in the Northern Ireland Assembly elections on May 5.

Because of this possibility, the contest across 18 constituencies for 90 seats has been billed as potentially the most significant in the 101-year long history since partition in Ireland took place on May 3, 1921.

While from the outside this appears to be the big story, within the North itself, there are various plots and subplots that will play out over the next week prior to the election and possibly for months afterward. Having visited the North on a number of occasions, spoken to key strategists on both sides of the nationalist/loyalist divide, and canvassed voters for Aontú candidates (full disclosure, I am a member of that party, nationalist but more conservative, especially on issues such as abortion than Sinn Féin or the SDLP), this is my take on the forthcoming election and how it is playing out in nationalist areas.

For a start, the Sinn Féin campaign is very muted. While the threat of Covid still hangs in the air, door-to-door canvassing is curtailed, leading one observer to call it the invisible election in nationalist areas.

The traditional hustings are also in short supply. Apart from the Easter Rising commemorations very few Sinn Féin public rallies or meetings have been held, and at these events, the speakers and attendees were very well disciplined. There’s been very little talk of a border poll or other contentious issues, and no rallying calls for a return of “those who haven’t gone away you know,” aka the IRA.

The strategy is very clear – “don’t frighten the horses,” in this case the slumbering unionist voter disillusioned by the paucity of leadership on their side of the divide. The more they stay at home, the greater the chance of a Sinn Féin victory.

It's quite a change from the days that the Sinn Féin message was stifled by governments on both sides of the Irish Sea. Now the suppression is self-imposed.

In its place, Sinn Féin is running with a slogan of “Time for Real Change.” For a political party that has been at the heart of government for 15 years, this is a bit of a head-scratcher. While this is a sop to the cost of living crisis, they would do well to remember that within their heartland politics is always, always about a border poll and reunification.

However, the suspicion is that the party has bigger fish to fry, and their reluctance to go full-on with a republican message may be an indication that they have reached the high watermark in terms of a nationalist message and must reach out beyond that if they are to grow. They also don’t want to frighten any horses down south where they hope to enter government after the next general election.

But one thing Sinn Féin has not forgotten is the transactional nature of politics. They work for every vote and every voter, and they operate as good a political machine as you will see anywhere.

But Sinn Féin are not invincible, and among the challenges they face is the performance of the new candidates that they are fielding. This will be the last hurrah for the so-called prisoner candidates, those that have served time at “Her Majesty’s pleasure,” such as Conor Murphy and Gerry Kelly.

There will be no Martin McGuinness or Alex Maskey on the ballot papers. This will come into play in transfers from defeated candidates where name recognition always helps in an election decided by proportional representation.

The leader with the most to lose is the SDLP’s Colum Eastwood. His party’s campaign has not gained any traction to date.

The heady days of the general election in 2019 when it won two seats in the House of Commons will be quickly forgotten if the party remains with its current seat level of 12 in Stormont, and even more tellingly will be its share of the vote which at 11.9 percent in the 2017 Assembly elections was its worst performance ever.

Will it go lower? Eastwood may be about to realize what others have previously discovered, namely that leading a Northern Ireland political party from the green benches of Westminster is a recipe for failure.

The SDLP is suffering from something of an identity crisis, typified by its on-again, off-again relationship with Fianna Fáil in the south. The core SDLP voter that was loyal to John Hume and Seamus Mallon is in decline while the younger, more liberal element still has not found its feet under Eastwood’s leadership.

It is not that they are without talent. Their sole ministerial representative in the outgoing Stormont government, Nichola Mallon, impressed observers during the Covid crisis. Still, she will face a tough battle in North Belfast, and storm clouds are gathering for Eastwood that will only be averted by a dramatic turnaround in the party’s performance in the last week of the campaign.

Their backing among their more traditional supporter was not helped by a tone-deaf statement from the SDLP representative in Foyle, Sinead McLaughlin, who in response to voters asking about the SDLP support for abortion up to birth told them to “get a life.” Her response went viral and led to hastily produced statements by other SDLP candidates repudiating her position.

Cue Father Paddy McCafferty, the parish priest in Ballymurphy, the heart of West Belfast, who in a sermon over Easter accused Sinn Féin, the SDLP, Alliance, and "all that other crew" of promoting abortion. His words were picked up by local and national media and put that issue at the center of debate.

McCafferty indicated that while he had been an SDLP supporter, he would never vote for the party again, and that he would be voting for Aontú and their candidate in West Belfast, Gerard Herdman.

And while Aontú is a pro-life party, they also have a left-of-center economic approach with former members from Sinn Féin, SDLP, and non-party. They are running 12 candidates across the age and gender spectrum.

Among them is Denise Mullen in Fermanagh, South Tyrone. Her father Denis was brutally murdered by Loyalist assassins, the notorious Glenanne gang, who were facilitated and directed by elements within the RUC and British Army.

This is Aontú’s first major electoral outing across the North, and they are running an energetic campaign and expect to be competitive in four of the constituencies they are contesting.

People Before Profit have one outgoing representative, Gerry Carroll in Republican West Belfast. With the cost of living on everyone’s lips, they are expected to hold this seat, though the antics of the party’s TDs in Dublin when they refused to stand to applaud Ukrainian President Volodymyr Zelensky when he addressed the Dáil has not gone down well with the public and comes up on the doorsteps.

Apart from competition within nationalism, Sinn Féin will also have to deal with the vagaries of the electoral system. Past masters of tactical voting, they will only be too aware of the dangers of a Loyalist under the radar campaign to keep them out of top position at all costs.

The Democratic Unionist Party (DUP), for their part, has adopted a conservative approach to this campaign and has not stretched themselves in terms of their ambition to win extra seats. What they have they hold, and their ambition is to minimize any loss of seats while at the same time win the popular vote ahead of Sinn Féin.

While the number of constituencies remains the same, the electorate has changed. Best estimates are that the churn in terms of the electorate is up to 7,000 per constituency. This is the total number of people no longer on the electoral list and new voters. Demographics suggest that this will give a slight additional advantage to Catholics over the 2017 vote.

All to play for then in the last week of campaigning, but it also feels very much like the calm before the storm. Unionism is very clear that it will not go into government unless the Brexit Protocol is dealt with. The leader of the DUP has left no wriggle room on that, just as Sinn Féin leader Mary Lou McDonald has left no room for maneuver on changing the title of First Minister to placate unionism.

The smart money is that 2023 will be the earliest that we will see a resolution to these issues. Unionism for its part sees no downside in continued direct rule from Westminster.

Time perhaps for the White House to play the role, yet again, of honest broker?

*This column first appeared in the April 27 edition of the weekly Irish Voice newspaper, sister publication to IrishCentral. Michael O'Dowd is brothers with Niall O'Dowd, founder of Irish Voice and IrishCentral.

First time stays in Dublin made magical at the Westin Hotel