This week's Irish Voice Editorial: Sinn Féin becoming the largest political party in Northern Ireland could become "one of the most seismic events since 1916." 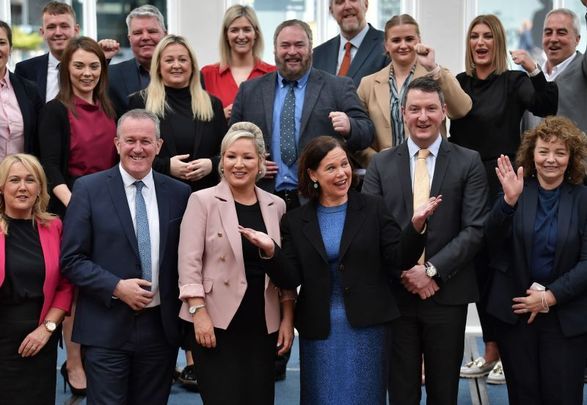 April 4, 2022: Sinn Féin president Mary Lou McDonald and Northern leader Michelle O'Neill with party candidates ahead during the Sinn Féin candidate election launch at the Titanic Hotel in Belfast, Northern Ireland. Following the resignation of the DUPs Paul Givan as Northern Ireland First Minister, the province will go to the polls on May 5th with many political experts predicting Sinn Féin polling as the North's largest party with Sinn Féin deputy leader Michelle O'Neill potentially elected as the new First Minister. Getty Images

As we approach the 106th anniversary of the Easter Rising of 1916, the probability of a massive breakthrough for Sinn Féin in the upcoming Northern Ireland Assembly elections on Thursday, May 5 is increasing.

It could be one of the most seismic events since 1916 if Sinn Féin succeeds in becoming the largest party in the Orange state which was founded and gerrymandered to make such a reality impossible to achieve.

Yet there it is, in the latest Irish News newspaper poll, Sinn Féin extending its lead to seven points over the main unionist party, the DUP, which was founded by Ian Paisley, holding a 27 percent to 20 percent lead.

There is a gap back to Alliance (moderate, draws votes from both sides) at 14 percent, the Ulster Unionist Party (less hardline than the DUP) at 13 percent, SDLP (moderate nationalist) at 10 percent, and the most hardline unionist party, the Traditional Ulster Voice, is at five percent, with Greens at four percent.

Sinn Féin remains on course to be Stormont's largest party after May 5, having extended its lead over the DUP according to a new poll from the Institute of Irish Studies-University of Liverpool/The Irish Newshttps://t.co/JyyTM4DfxF pic.twitter.com/Hg1z6iP9Ml

If Sinn Féin continues to hold the lead, they are automatically entitled to nominate the first minister of Northern Ireland, who would be the northern Sinn Féin party leader Michelle O’Neill from Tyrone.

But no one is counting the chickens yet in Sinn Féin. Every time there is a close election looming, unionists have switched horses to back the hardline DUP in order to keep Sinn Féin out.

So far, as noted in the Irish newspapers, Sinn Féin are running an upbeat, positive campaign while the DUP are warning about the devil afoot and Armageddon if Sinn Féin wins a majority.

The DUP tactics so far, to join in angry meetings about the Brexit Protocol issue, seems to have backfired.  There has been violence at the rallies, fomented by angry loyalists who are determined to keep Sinn Fein out.

DUP leader Jeffrey Donaldson has looked more a follower than a leader as he desperately tries to broaden his party’s appeal in the waning days before the election.

The other factor in play is that voters will pick two candidates, their first and second choices.

This is where the Alliance Party comes in. As the only cross-community party they are set to get many transfers of second votes which will greatly increase their vote and opportunity to win seats.

Interestingly, Alliance has become identified as the party of young people in their mid to late twenties who have no memory of The Troubles. In that sense, these voters are very unpredictable as to what their choices will be and where their second vote will go.

So many unknowns, but an historic election is on the cards. The men and women of Easter 1916 would be vindicated if Sinn Féin blaze a victory trail.